Debate about Australia’s national security needs and commitment to nuclear submarines - along with discussion around the need to reduce our carbon emissions while replacing firm, ageing coal plants - has led to renewed advocacy for a domestic nuclear power industry.

The question of nuclear power has previously been formally canvassed by South Australia’s Nuclear Fuel Cycle Royal Commission and subsequently a Federal Parliamentary inquiry, which recommended in 2019 that the prospect of nuclear technology be considered as part of the future energy mix. The NSW Parliament also considered uranium mining and nuclear facilities in 2020.

The Australian Energy Council believes it is sensible to keep technology options open. The best way to ensure this is through a technology neutral approach that assesses the viability of nuclear energy on whether it meets appropriate scientific standards and provides value within a market context.

But nuclear generation has major impediments to its introduction in Australia, and the business case for it is extremely difficult. Below we look at some of the continuing challenges facing nuclear power and the hurdles to it becoming a part of our grid under current scenarios.

Key impediments to nuclear power stations remain their high capital costs, long build times, and the need to gain a strong social licence and political bipartisanship. A further issue is the flexibility of nuclear plants given the need to complement variable renewables.

The UK’s new 3,200MW Hinkley Point C nuclear power station was mooted in 2010 with an estimated cost of £16 billion ($28.5 billion). This cost has since ballooned out to £22 billion ($41 billion) while the expected period of completion has been delayed. The first reactor is expected to produce power in June 2026 compared to a previous expectation of the end of 2025. Under a contract for difference the ratepayer-backed guaranteed price for electricity generated by Hinkley was originally agreed in October 2013 and guarantees the plant will get GBP92.50/MWh (AUD$174/MWh) for its first 35 years of operation. In contrast, the CSIRO estimates large-scale Australian solar and wind farms levelised cost of energy (LCOE) at $45-70/MWh, and gas-fired plants at $70-120/MWh.

Advocates are not arguing for traditional large-scale nuclear plants for Australia’s grid, but rather Small-Scale Modular Reactors (SMRs). The Federal Government’s Technology Investment Roadmap had a watching brief on this technology. Last week a new discussion paper was released that looked at developments to date for three particular designs that it believes are well placed to meet Australia’s energy needs and are assumed to be on track for commercialisation at the end of this decade.

SMRs are generally considered to be reactors of 300MW or less developed as modules which can also be combined for larger plants. The International Energy Agency (IEA) has listed more than 50 SMRs in development.

SMRs have a number of perceived benefits:

Despite the perceived benefits, modern SMRs are still in development stage and are yet to reach commercialisation, and as such, remain an unproven technology to date.

Dr Ziggy Switkowski, former head of the Australian Nuclear Scientific and Technology Organisation and chair of a federal review of nuclear power in 2006, told the Federal Parliamentary inquiry “on paper, they look terrific” but also flagged that we won’t know the potential for SMRs “until the SMRs are deployed in quantity, and that’s unlikely to happen for another 10 or so years”.

SMRs seem likely to still come with high capital costs. In 2019 Rolls Royce proposed a 440MW plant with a reported price tag of $2.7 billion for Australia. 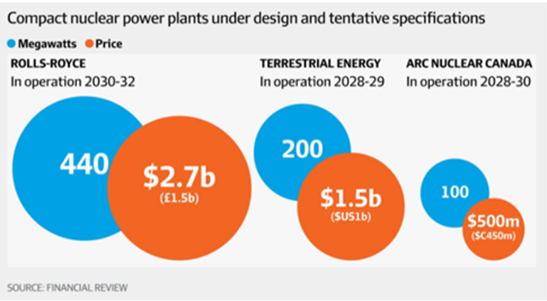 There has been debate about the cost of NuScale’s SMR which is proposed for the Utah Associated Municipal Power Systems’ (UAMPS) Carbon Free Power Project (CFPP). The project was announced in 2015 and has since received US Government underwriting of US$1.4 billion to help de-risk the project.

Originally it was to have 12 x 50MW modules, which was upgraded to 12 x 60MW (720MW), however it has since reduced to 6 x 77MW modules (462MW) with some of the original consortium members not proceeding. It planned to build a NuScale plant on, or near, the Idaho National Laboratory Site.

The NuScale CFPP overnight capital cost estimate (simplistically what it would cost to build a plant overnight or the estimated engineering, procurement, and construction costs) is US$3.6 billion (around $4.9 billion). But this is not the actual project cost, which would include costs such as financing and escalations. UAMPS’s total project budgetary cost estimate is US$6.1 billion (around $8 billion), including the NuScale overnight capital cost, owners’ costs, escalation, contingency, fees, warranty and capitalised interest. Compare that to the estimated cost for the 660MW Kurri Kurri gas-fired power station in NSW of $600 million.

The NSW Parliamentary Committee's report accepted it is difficult to estimate the cost of nuclear energy in a country like Australia because of the lack of a history of nuclear energy and received a wide variation in LCOE costs, with figures ranging from $325/MWh to $60/MWh. The Federal inquiry also found pinning down costs a challenge and released a table showing some of the cost estimates it received:

Source: Report of the inquiry into the prerequisites for nuclear energy in Australia

The Australian Nuclear Science and Technology Organisation - ANSTO - told the inquiry it was difficult to establish estimates for the LCOE for nuclear energy in countries that do not have existing nuclear industries.

Nuclear power plants operate around the world as baseload generators; they are not designed to respond quickly to follow changes in load and are likely to be uneconomic operating in this way. SMRs are predicted to respond faster than traditional nuclear plants, so could be a better fit with increasing amounts of renewable generation capacity. If nuclear is not flexible, it is not ideal  generation for a rapidly transitioning grid.

Why is inflexibility a problem? Because Australia is bringing variable renewable generation online at the fastest rate in the world. This challenges the electricity market as it has to deal with supply that fluctuates widely during the day, depending on the weather. Current nuclear plant is not agile enough to deal with rapid rises and falls in supply and demand; It cannot ‘fast start’ like pumped hydro, gas-fired peaking plants, and batteries.

NuScale states that its modules can ramp up quickly – but this is based on modelling and it’s difficult without operating plants to assess the accuracy of its claims. Regardless, operating SMRs at reduced capacity, as with larger nuclear plants or any dispatchable plant, will impact its economics.

Even if the plant can be engineered to be more agile, the economics are still wrong. The future market will have large quantities of free surplus renewable energy for much of the time, interspersed with periods of shortage when the wind and sun die down. The appropriate complement to this is a plant with low capital costs and high running costs – the latter does not matter much, as the complementary plant will not need to run often.

In contrast, nuclear plants have very high capital costs and effectively a negative fuel cost: i.e. they actually cost more to run at partial than full load due to the wear on the machinery. This implies that in a system with a mix of renewables and nuclear, renewable surpluses would be managed by reducing the output of zero cost renewables rather than negative cost nuclear plants. So, if you start with a nuclear-based system, there is not much sense in building a lot of renewables, and vice-versa.

Given Australia has already adopted a great deal of variable renewable energy sources, the only complement for the future of our electricity market is flexible, dispatchable generation. The ideal sources are pumped hydro, batteries, and gas-fired peaking plants that can be converted to run on emissions free hydrogen once it is available.

You need a licence

The nuclear industry lacks a social licence in Australia. It has been said that for many Australians their four reference points for nuclear: Three Mile Island, Chernobyl, Fukushima and The Simpsons[i].

Australians have long felt a sense of unease about nuclear power so convincing them that nuclear is safe will be a challenge while the politics will remain fraught. A recent Newspoll in The Australian suggested there may be a shift in attitude with 25 per cent of 1545 voters saying they “definitely” supported developing a domestic nuclear industry with 36 per cent saying it should be considered, although a Lowy Institute poll found 51 per cent remain opposed to removing a ban on nuclear power.

Regardless of recent polls well-resourced green/NIMBY opponents would certainly need to be contended with if any proposals were put forward. With nuclear currently banned in Australia legislative change would require a bipartisan shift at both a State and a Federal level to realistically get the go-ahead. A key recommendation of the Federal inquiry into nuclear power that prior informed consent from local communities should be a condition of approval for any nuclear power or nuclear waste disposal facility.

Other difficulties also need to be overcome. Australia would need a plan to deal with nuclear waste and the development of the necessary skills for a workforce to manage a nuclear industry. The regulatory framework to guarantee the safety of workforces, and the transport and disposal of nuclear waste, could take years to get right.

As with electrification this is an important debate but it should not detract from current work to manage the rapid shifts in energy supply.

Nuclear can be expected to continue to play an key role internationally, but for a country with no existing industry, it’s difficult to see a plant being developed and it would certainly require government backing, both financial and through the right policy settings.

In the case of SMRs even where a nuclear industry exists, it will be at least the late 2020s before they come online, so their commercial value remains to be firmly established. Given the time it would take to establish and build a plant, it is likely other technologies will continue to advance.

Despite the AEC’s position that existing nuclear technology is currently commercially unviable, we do not support the ban on using nuclear technology to deliver electricity. The AEC believes government should set in place a conducive regulatory and safety framework for nuclear generation so that if the market deems it has value in the future, it would be an available option. This is consistent with the SA Royal Commission which recommended removal of existing prohibitions on nuclear generation in Australia. The Federal inquiry recommended lifting the moratorium on nuclear energy in relation to Generation III+ and Generation IV nuclear technology, including small modular reactors.

Meanwhile, however, government should not be unduly distracted from the real challenges of the energy transition by what seems very likely a long shot.