There’s been plenty of media attention around claims the average[i] Australian household could save $5000 annually on their energy and vehicle costs by 2030 and up to $6000 by 2035 through greater electrification. But what is the basis for this claim and what would have to happen for this to occur?

The projected savings are outlined in the recent discussion paper ‘Castles & Cars - Savings in the suburbs through electrifying everything’, and accompanying Technical Study which were released by think tank Rewiring Australia[ii]. Founded by Dr Saul Griffith last month, it is modelled on Rewiring America, which he also co-founded with the aim of “increasing US climate ambition”.

The discussion paper includes extensive modelling to arrive at its cost saving estimates. But it is extremely ambitious; to meet the key objectives it would require some substantial hurdles to be cleared including the capital costs of replacing existing technology with new technologies, government will and spending to incentivise and mandate change, as well as the management of the implications for existing power infrastructure, ensuring system security and supply chain capacity.

But the discussion paper sees the need to decarbonise the economy as paramount and argues households are poised to decarbonise first and fastest via electrification. It estimates household energy consumption (including vehicles) accounts for 42 per cent of Australia’s domestic use emissions, while much of the technology needed for electrification is already available (see figure 1). 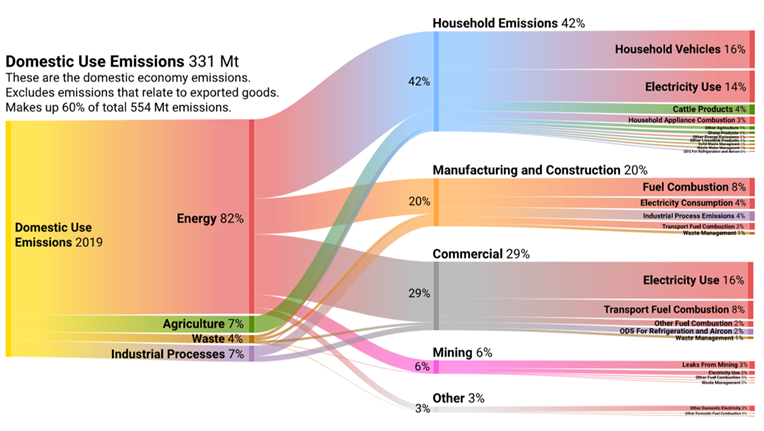 Energy use in the average home is largely from heating and cooling, water heating, cooking, and other appliances like refrigerators, dishwashers, washing machines and dryers, electronics and vehicles. The average Australian household is estimated in the paper to spend $5,248 on energy - $1,481 for electricity, $567 for natural gas, $103 for LPG, $3,056 for petrol and diesel, and $41 for wood.

The modelling considered household energy and vehicle use by state and projects capital and operating costs for electrified substitute technologies, such as reverse cycle air conditioning replacing gas space heating and electric vehicles replacing internal combustion engine cars, each year through to 2035. It has sought to project price and performance improvements for rooftop solar, batteries, EVs and key household appliances.

It also considered the financing costs for replacement items and ongoing fees and compared the future costs with existing household energy costs (some further details are included later in this article).

It argues that if we begin electrifying homes, starting with 3 per cent of homes next year through to 40 per cent in 2026, we could reach 100 per cent by 2030 as shown below. But it notes most households won’t be able to afford the capital investment required up front and estimates the Australian Government would need to invest $12 billion in the early 2020s to decarbonise households by 2035. To put this cost into context, the Australian Government’s response to COVID-19 has cost $291 billion as of May 2021. 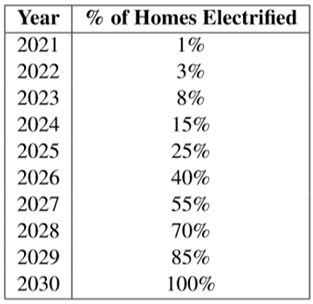 The projected costs for households in a shift to electrification is shown in figures 3 and 4. 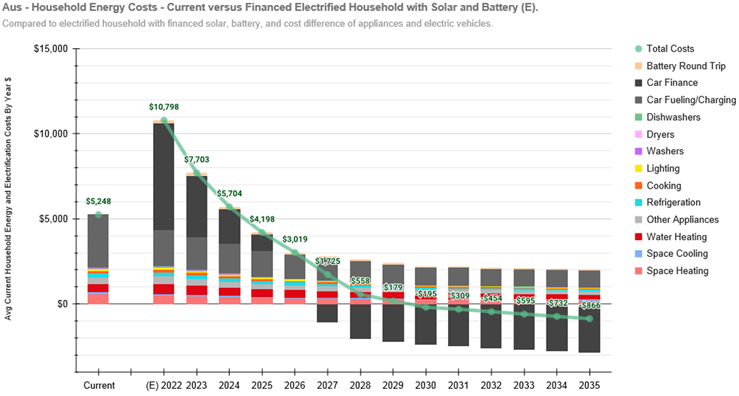 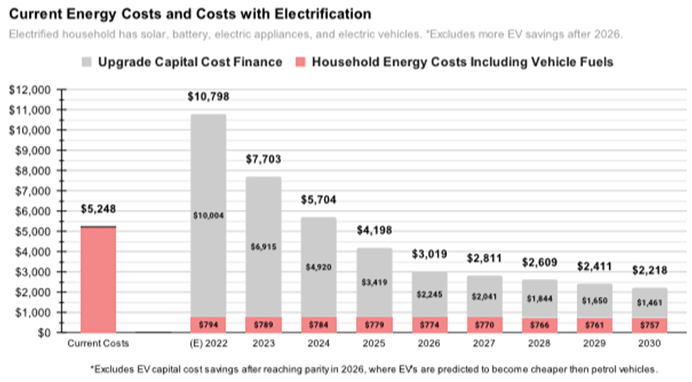 Projected spending and savings to the economy are shown in figure 4, while figure 5 shows the household savings estimated from 2025. 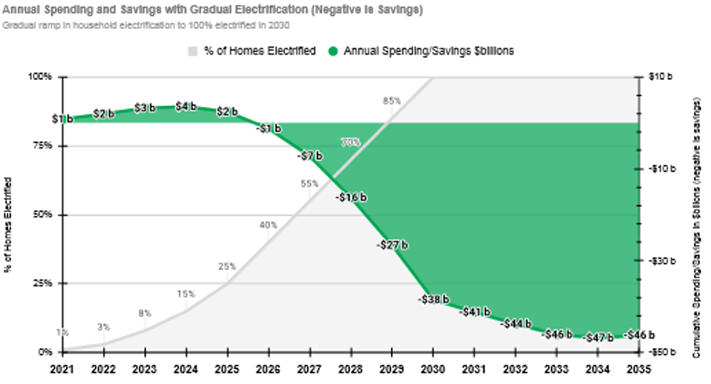 Note: Annual savings in the Australian economy assuming the adoption rate slowly ramps up between 2021 and 2024 with 100 per cent of households electriﬁed by 2030. 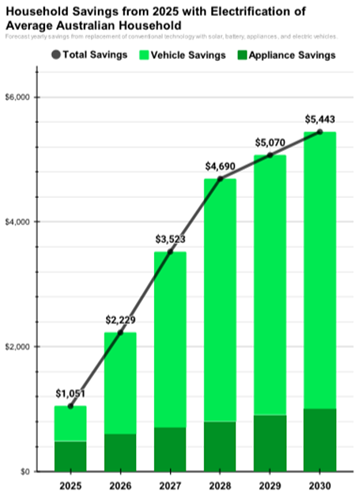 The paper states the average Australian home energy use could be reduced to 37kWh daily from an estimated 102kWh (based on energy use including vehicles) and could “nearly be completely satisfied with a 10-12kW solar system and compatible battery (the average solar PV installation reached 8kW in June this year – see our most recent Solar Report.)

The largest savings for households are said to come from switching a “significant” share of household electricity use to rooftop solar with battery storage.

The modelling uses larger system size prices (6kW, 7kW, 10kW) which were averaged to get a single per kW price. Only larger systems were used based on the need for solar to deliver the bulk of household electricity. The amount of electricity self-generated and stored and used ratios for the modelling are shown below. The 20 per cent supplied from the grid also accounts for EV charging away from home and paying standard grid charging.

The levelized cost of electricity (LCOE) in  for solar in each state is based on a 25–year life, with 0.5 per cent degradation per year and an inverter efﬁciency of 85 per cent and financing rate is 4 per cent.[iii]

Battery storage costs in the modelling assume 70 per cent battery retention after 10 years (the paper notes this is based on the Tesla Powerwall 2 warranty). The battery price/kWh is multiplied by 1/0.7 to get the battery size required with degradation taken into account. 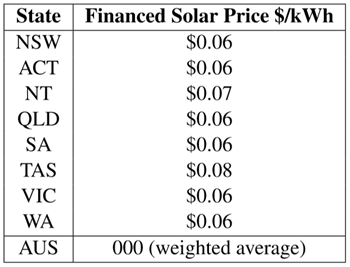 Retail appliance pricing at August 2021 was used with installation costs sourced from multiple online retailers. An average of a range of appliances was used.

Rewiring Australia said the difference in cost between replacing an appliance with a similar conventional appliance and a more efficient electrified appliance was used for its calculations.

Electric vehicle (EV) costs used in the modelling are based on BloombergNEF’s electric vehicle parity estimate for a mid-size SUV and a 2021 cost multiplier of 170 per cent, which falls to 100 per cent in 2025 as the price of EVs falls. 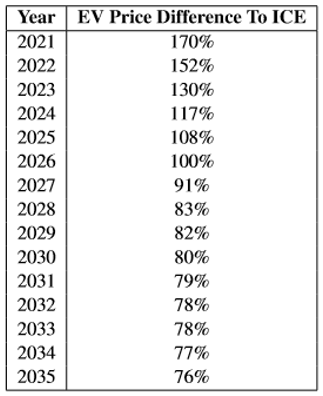 So, an average new conventional car price of $40,000 was used (equivalent to an EV price of $68,000 based on 170 per cent) along with the financed difference in price. This was multiplied by the average number of vehicles per home (i.e. 1.8). A total average price for a Type 2 home charger for EV and installation cost (total of $2118). A similar cost reduction curve as used for EVs was used for the charging units in the modelling.

For capital costs in the model, a ﬁnanced cost over the approximate warranted lifetime is used - 25 years for rooftop solar, 10 years for water heaters, and seven years for EVs.

“The ﬁnanced cost used in the savings and costs calculations is the full cost of rooftop solar and home batteries, and the difference in cost for appliances and electric vehicles.

Ambitious it is, but to realistically be achieved would require a major push by government with both significant financial backing and policy settings. It is also not clear that all the full cost impacts have been considered.

It correctly identifies one of the biggest hurdles to electrification will be the capital cost of switching appliances and vehicles. A further challenge is the time it would normally take for this to occur based on the normal replacement lifecycle of various appliances and technologies.

Furthermore, the paper does not really address the fact that approximately one third of Australian households are renters. These households are effectively excluded from accessing the technological changes described in the paper. It points to the need for financing solutions for the lowest income households including policies to incentivise both landlords and renters to help distribute the savings. But it seems highly unlikely that landlords would undertake the expenditure required to electrify their property investments, install solar PV, batteries, and EV charging facilities.

To overcome these issues, it argues for government support via incentives such as buy-backs and subsidies will be needed particularly in early 2020s.

“We need to be designing the policy environment that enables this future outcome immediately. It is vital that this electriﬁcation revolution is equitable. Governments must ensure that all households, regardless of their socioeconomic status, can reap the economic beneﬁts that electriﬁcation can deliver households by mid-decade.”

The supporting technical paper also argues a 100 per cent adoption rate is needed and will only achieved by mandate. And while the paper accepts this might “sound like a screed for government intervention” it claims it’s not, but rather “what is technically necessary”.

[ii] Launched in September Rewiring Australia describes itself as “supported by an optimistic group of non-partisan Australians to collectively narrate and illustrate the positive outcomes possible for Australia, and the world, in transitioning to rapid decarbonization using an “Electrify Everything” strategy”.

[iii] LCOE is the total cost of each kWh. It incorporates capital costs (ie, equipment and installation), operating costs, finance costs, the life of the equipment and the amount of kWh it will generate over its life.