There is significant anticipation of what the change in Federal Government will mean for the energy sector and climate policy.

Many already expect to see earlier than planned closure of coal-fired plants as more renewables come into the grid, while the Greens are demanding no new coal or gas projects.  And this is all occurring on the backdrop of high gas and wholesale electricity prices, which the Treasurer, Jim Chalmers, has described as a “perfect storm” of challenges.

The man given the job of steering through those challenges and implementing the overall Labor commitments on climate and energy policy is the Hon Chris Bowen MP, who was sworn in as Climate Change and Energy Minister this week.

It is a critical portfolio for Australia’s economy and the new Minister brings an extensive prior ministerial track record to the role.

After his election to the House of Representatives in 2004, Chris Bowen was appointed to senior ministerial roles both in the Rudd and Gillard governments between 2007 to 2013, which included a period as Treasurer (see table below for portfolios). He has also been a senior shadow cabinet member since 2013 and was appointed as the Shadow Climate Change and Energy Minister at the end of January last year.

He started in local politics early, joining the Labor Party in 1988, being elected to Fairfield Council in 1995 and serving as Mayor of Fairfield (1998-1999) prior to being endorsed for a Federal seat and entering the Parliament at the age of 31.

Former Prime Minister, Paul Keating (cited as an important mentor and inspiration for his pursuit of political career) told the Australian Financial Review that Bowen is “first and foremost a rationalist. He is a rationalist more than he is an idealogue”, while former Labor colleagues have described him as persuasive and focussed. They are attributes that will no doubt serve him well in his new Ministerial portfolio.

Since taking on the climate and energy role in the Shadow Cabinet, now-Minister Bowen has indicated a desire to restore a national policy framework and reinvigorate state collaboration and to work with the private sector and avoid interventions. The ALP also been supportive of the Energy Security Board’s work.

So what are likely to be his priorities in the role? Minister Bowen has made it clear that the election result delivered the Government a mandate to implement its climate plan.

Labor has outlined several climate policies that will be overseen by Minister Bowen. These are:

In the lead-up to the election (and since) Mr Bowen has particularly pointed to the first two policies as doing the heavy lifting in achieving the Government’s emissions reduction ambition of 43 per cent by 2030.

In commenting on the safeguard mechanism, he told the Australia Institute:

“…you can’t reduce emissions in Australia unless you’re getting emissions down from the biggest emitters. It’s not rocket science and the safeguard mechanism was designed by the [previous] Government and I’ve taken their architecture because I think the architecture is pretty good in terms of the policy design.”

The safeguard mechanism, which was introduced in 2016 by Greg Hunt, who was Environment Minister under the Abbott Government, applies to 215 of the biggest emitters, covering mining, oil and gas extraction, manufacturing, transport and waste. Together industries covered by the mechanism account for around 27 per cent of Australia’s total emissions. The emission threshold used is 100,000 tonnes of CO2-e annually with baseline emission levels applied and operators required to buy carbon credits if they exceed the cap or pay a penalty. Last year, Carbon Market Institute estimated around $15 million was spent on offsets.

The outgoing Minister for Industry, Energy and Emissions Reduction, Angus Taylor, said the safeguard mechanism “was never meant to be a tool to force businesses to reduce their emissions – which is a carbon tax by stealth.’’ In contrast., the new Climate Change and Energy Minister sees it as an important means to achieve broader emission reductions across the economy with a tightening of baselines to be pivotal in achieving that.

In fact, Minister Bowen has pointed to existing loopholes (“more holes than in a piece of Swiss cheese”[i]) in how the baseline has been set and said Labor would put it on a trajectory to net-zero and then “work with those facilities through the Clean Energy Regulator (CER) to see their emissions come down”.

The electricity industry is notionally covered by the safeguard mechanism, but is subject to a separate sectoral baseline, and we have seen the total sectoral emissions rapidly declining (see graph below).

The issue has been around other sectors which have had their baselines set so high that they have rarely been exceeded.  RepuTex, which undertook modelling of the ALP’s policies, found

“Emissions covered by the Safeguard Mechanism have grown 7% since its commencement in July 2016 … under current policy, covered emissions are projected to grow to 151 Mt by 2030 to be 27% above 2005 levels (34% of national emissions)”.

The figure below shows the contrast in actual and projected reductions by the electricity sector compared to facilities covered by the Safeguard Mechanism. 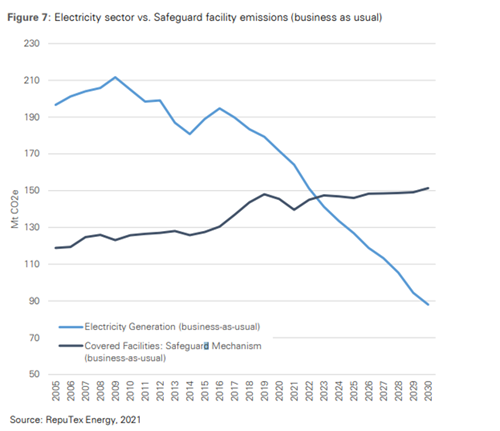 While the following graph shows the headroom under the existing mechanism. 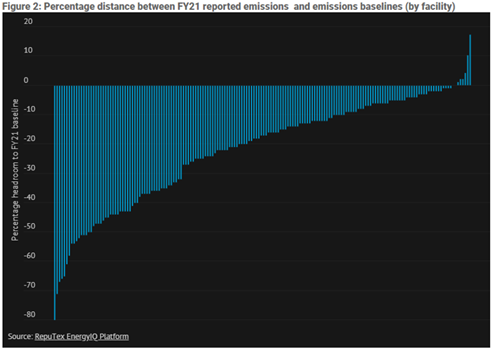 Under its Powering Australia plan, Labor intends to adopt the Business Council of Australia’s recommendation that “emission baselines [be] reduced predictably and gradually over time”. RepuTex expects improvements to the Safeguard Mechanism to deliver 213Mt of emissions reductions by 2030.

The scheme was modelled to begin in 2023-24, with emissions baselines for covered facilities revised and set to decline in line with an aggregate annual emissions baseline reduction of 5Mt, reaching net-zero by 2050.

The Department of Industry, Science, Energy and Resources (DISER) and the CER will advise the Government on each facility's share of the overall trajectory, based on available and emerging technologies in each sector. There will also be “tailored” treatment for Emissions Intensive Trade Exposed (EITE) industries. This would be based on a “comparative impact principle, informed by industry consultation and DISER/CER advice”.

Tradeable Safeguard Mechanism Credits (SMCs) will be issued where an entity comes in under its emissions baseline. Facilities that exceed their baseline will be required to surrender an equivalent amount of credits in the form of SMCs and/or Australian Carbon Credit Units (ACCUs).

Credits and the revised baselines are expected to encourage investment in low-emissions technology.

Rewiring the Nation represents the second priority area nominated by Minister Bowen. He has argued there is a real need to improve the energy grid and this policy aims to accelerate investment in transmission into this decade to assist support expansion of renewable energy developments.

According to the RepuTex modelling it is expected to contribute to 5 per cent emissions reduction by 2030 and “getting to 82 per cent renewables by 2030[ii]”.

The Government will “invest $20bn to rebuild and modernise the grid” via a Rewiring the Nation Corporation (RNC) and this would be in the form of low cost financing to industry.

During the campaign, then Shadow Minister Bowen was very supportive of the Australian Energy Market Operator’s Integrated System Plan (ISP) and felt it needed to be supported by a “process that is fit-for-purpose”. He told an Energy Networks Australia conference that the Albanese Labor Government would look to work with states, market bodies, networks and local communities to improve the Regulatory Investment Test for Transmission (RIT-T) and said that it should better capture social and economic benefits.

Climate change and energy policy has never really left the headlines, and it will continue to be watched closely from both sides of the political aisle and many outside commentators. The challenge for the Climate Change and Energy Minister will be bringing back greater coordination and agreement amongst stakeholders to achieve the Government’s overall objectives.

In order to support more effective engagement the Minister could look to the operation of the Energy National Cabinet Reform Committee (ENCRC) and the Energy Ministers’ Meeting (EMM). Set up for purposes of handling the pandemic, the ENCRC and EMM replaced the former COAG Energy Council as part of the National Cabinet reforms in 2020.  If those processes could now be reformed to enable a more open and transparent engagement with stakeholders, that could assist in better outcomes for the energy sector and deliver on the Minister’s stated desire to begin a better collaboration in the interests of energy affordability and reliability.

We also note that the Department that supports the Minister is to be restructured, effective 1 July.  The current Department of Industry, Science, Energy & Resources will become the Department of Climate Change, Energy, Environment & Water signalling a welcome and more coordinated approach to policy in those areas.

When the government changes, a change in policy direction and approach is to be expected. Early signals are that the Minister Bowen intends to work cooperatively with the energy sector to deliver on his policy agenda and work with us to ensure the transition to a lower emissions grid maintains affordability and reliability. 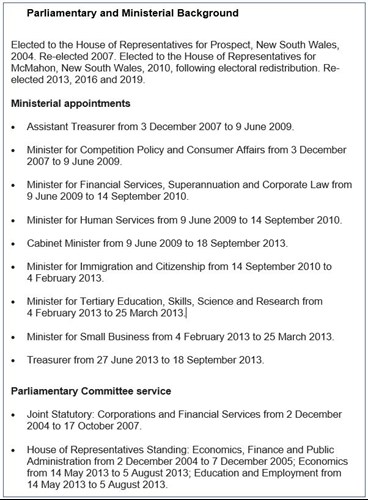 [i] The Australia Institute Federal climate debate, 6 May 2022