A recent report looks not only at the potential to convert cities to a hydrogen fuel source, but also at what needs to be done to make it happen.

The new KPMG and CSIRO report - ‘Hydrogen Communities – Assessment of Suitability of Communities for Conversion to Hydrogen’ has also produced an accompanying H2City tool – via a joint collaboration between KPMG, the Australian Renewable Energy Agency (ARENA), ATCO, and the CSIRO – that aims to help identify and assess communities with the potential to convert their energy use to hydrogen.

The report states that around the world, including Australia, hydrogen has the potential to play an important role in the decarbonisation of the energy sector, if produced by zero or low emissions sources. And with Australia’s large solar and wind resources, clean hydrogen can play a key part in supplying the country with a lower emissions energy source, which could aid system security, while opening opportunities for hydrogen exports to the global market. 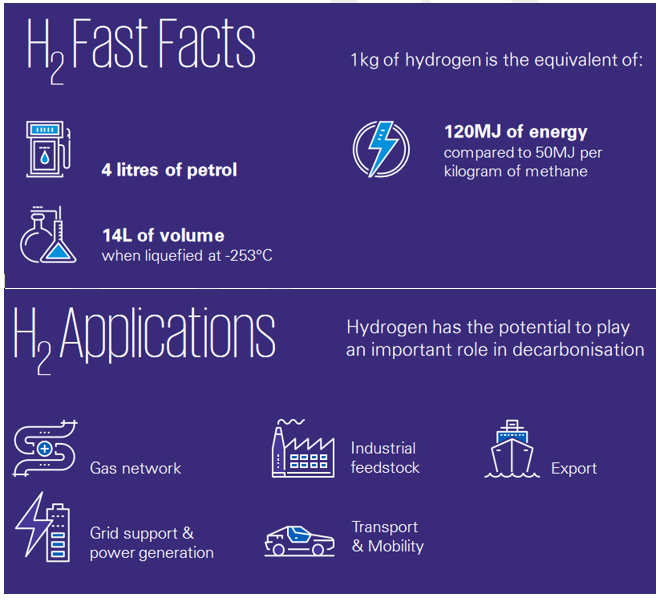 However with hydrogen technology still maturing current efforts are predominately focused on developing strategies to progress the technology needed, while attempting to solve key barriers – such as supply chain infrastructure and supply costs across the hydrogen value chain, as well as gaining community acceptance through increased hydrogen education and wider awareness.

Australia is still at trial-stage in its investigation to remove these barriers, and the report states that some examples of efforts to unlock these obstacles include:

States have also come on board with the Western Australian Government releasing its Renewable Hydrogen Strategy earlier this year, which aims to position the state as a leader in the global renewable hydrogen industry. As a part of the State Government’s drive for innovation and diversification, the Western Australian Renewable Hydrogen Council[iii] was also established in 2018.

Queensland has its Hydrogen Industry Strategy which signals the state’s intent to “position itself as a significant hydrogen trading partner with our international neighbours”[i]. While South Australia has its own Hydrogen Action Plan has five planks: Integrating hydrogen into the energy system; Facilitating investments in hydrogen infrastructure; Establishing a world-class regulatory framework; Deepening trade relationships and supply capabilities; and, Fostering innovation and workforce development.

While the hydrogen supply chain is still in trial-mode, complexities remain in understanding how cities and regions can undergo a conversation to hydrogen. KPMG’s report framework looks at global and Australian case studies of communities undergoing hydrogen initiatives and conversions, and at certain key criteria across the hydrogen supply chain to assess the suitability of a community for conversion. These factors include: Demand, production, storage and transport, local infrastructure, decarbonisation, government policies and initiatives, and partnership and coordination.

The assessment also includes the development of the H2City industry model – which can help to determine early concept screening of potential communities suitable for converting their energy usage to hydrogen.

The H2City Tool, along with the assessment framework, aims to provide a clear structure to support at which point hydrogen becomes a viable for a region to meet its energy needs. It is intended to support government, transport and infrastructure agencies, developers and policy makers, as well as the wider energy industry in assessing suitable communities for conversion to hydrogen.

The tool can be used to assess the benefits of regional town or municipality switching to hydrogen, and can estimate the costs of converting aspects of a community’s energy needs to hydrogen based on data provided by the CSIRO. The report states:

“Essentially the H2City Tool allows the user to compare outcomes from different scenarios. Different inputs and assumptions used in the model can generate varying outcomes. At a macro level, by assessing different scenarios, the user is able to better understand key factors that are potential constraints to conversion, and trade-offs required, provide the optimal balance of cost and ease of implementation.”

The tool includes over 200 inputs grouped into eight broad categories for the user to consider in defining the scope of transition in the community - shown in figures 2 and 3 below. These inputs are used to contrast a hydrogen versus electrification solution for a region.

The assessment process then follows four steps (further functionality and assumptions of the tool can be found here):

Western Australia is currently host to leading hydrogen projects at various stages (covered here in a previous EnergyInsider). KPMG’s Insights Team uses the tool to assess metropolitan Perth, and states that within the next 30-40 years half of Perth could be powered by hydrogen by undertaking the following phases:

According to KPMG, the conversion of the city’s transport fleet to hydrogen fuel cell electric vehicles could be achieved through building hydrogen refuelling stations across the city. It states that, powered by solar panels, these stations could use an electrolyser to extract hydrogen from water.

KPMG determine that if 8 per cent of Perth’s passenger cars and buses convert to hydrogen fuel cell electric vehicles in 2030, 430 megawatts of renewable energy capacity will be required to produce the hydrogen required, which would result in a per km cost of buying and running a hydrogen car at AUD 0.88 versus AUD 0.65-0.80 for a standard internal combustion engine car, stating:

“As the hydrogen-powered car market becomes more competitive, adoption becomes more widespread and hydrogen extraction technologies become more efficient, we estimate that the cost gap will disappear by 2037. Based on this data, it could be feasible to have more than half of all vehicles in Perth hydrogen powered by 2040. With nothing but water vapour emitted out of the exhaust pipe – this would be a positive win for the environment.”

With more than half of WA’s primary energy needs met by natural gas, converting the city’s gas network to a hydrogen enabled network would require hydrogen production an industrial scale. KPMG notes that currently there are plans to create a renewable energy hub on the Burrup Peninsula, with solar-powered hydrogen production commencing as early as 2021. It states:

“Assuming we could have large-scale production of renewable energy at a cost of AUD20/MWh, and transport the hydrogen gas to Perth via pipeline, we could see a per gigajoule cost of $13 in 2035. This is compared to natural gas’s current wholesale price of $7/GJ in WA, but the wholesale price does not account for externalities like CO2 emissions, whilst the hydrogen price is emission-free.”

KPMG suggest that with 40 per cent of the state’s total electricity generated from gas-fired generators, hypothetically, if Perth is a 100 per cent renewable city, gas-fired power could be replaced by hydrogen with a combination of renewables like wind and solar making up the remaining generation:

“Assuming we build the Burrup Peninsula energy hub, in 2040 we can be producing electricity at a levelised cost of $72/MWh, compared to $85/MWh from natural gas, and $125MWh from natural gas with Carbon Capture and Storage (CCS). This is a result of the anticipated dramatic drop in the cost of building and running hydrogen utility fuel cells, in conjunction with increases in their efficiency. While it may take time to get there, but the projected lower levelised cost of electricity from renewable hydrogen, together with its lack of emissions and the ability to store energy over long periods of time, makes renewable hydrogen a very attractive energy source for communities looking to make long-term investments in a world increasingly turning to zero carbon solutions.”

However KPMG state that “this is only the beginning”: With the development of cities and regions around the globe integrating hydrogen into their energy mix, there is also the potential for Australia to replace liquefied natural gas and coal exports with liquefied hydrogen, while opening further opportunities for global export.