Effective competition is essential to bring energy users, small and large, the benefits of product innovation and new technology at a competitive price. So how are the National Electricity Market (NEM) jurisdictions fairing after electricity competition reforms? The Australian Energy Market Commission (AEMC) released its annual review of retail competition last week and we take a look at the findings[i].

The evidence for effective competition combining with rising consumer satisfaction lead the AEMC to recommend that jurisdictions continue to harmonise regulatory arrangements to reduce the costs of competing across jurisdictions and bring consumers more efficient prices.

Competition is difficult to observe directly and so AEMC assesses competition through chosen indicators, with analysis of data and surveys of small consumers and retailers. The indicators used to assess retail competition fall under five broad headings:

Customer satisfaction has improved in jurisdictions with effective competition[ii]. In 2016 around seven in 10 customers were happy with the quality of service provided by their retailer.

Table 1: Retail competition by jurisdiction and change in consumer satisfaction since last year.

* Residential electricity customers satisfied with level of choice, change between 2015 to 2016 Review.

Figure 1: Jurisdiction by size (TWh) and competition progress (score based on AEMC data) 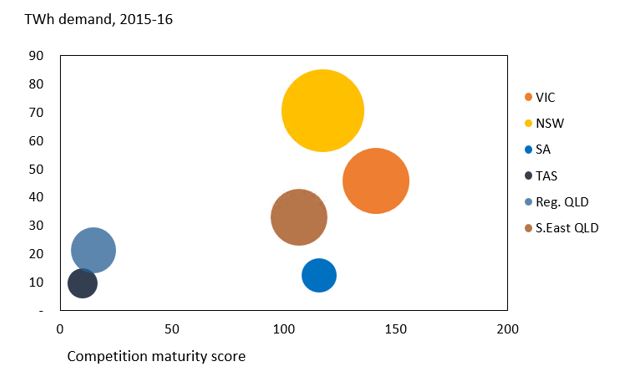 In 2016 the jurisdictions are at varying stages of competition reform. Table 1 above shows the significant improvement in ACT customer satisfaction with their choice of offers. The jump in satisfaction coincides with Origin Energy entering the market and all retailers in that market increasing the diversity of product offers. The new entry coincided with a doubling in the proportion of customers who said they had searched for a better energy deal and satisfaction with their retailer rising from 67 per cent in 2015 to 73 per cent in 2016.

Overall, new retailers have been encouraged to enter markets and second tier retailers have increased their market share and market concentrations have fallen. In 2015 six new electricity retailers entered the NSW market, five in Victoria and two in South Australia and SE Queensland, which has now moved to full price deregulation (effective 1 July 2016). This is expected to promote further competition in that market[iii].

Customers are taking advantage of the competition and shopping around. The AEMC found that 30 per cent investigated their options in the past 12 months with around 19 per cent of electricity and 17 per cent of gas users switching. Savings achieved ranged from 8-30 per cent on their electricity bills[iv].

Australia’s State and Territory governments are progressing competition reforms in each jurisdiction because competitive pressure brings more efficient prices, greater innovation and responsiveness of product offerings. Competition for customers creates opportunities to gain customers through new types of retail offers, technologies and energy services. In this way, competitive businesses have incentives to provide customers innovative products, greater choice and control over how they manage their electricity. New businesses, along with traditional retailers are now competing to offer customers new technology, such as solar PV and battery storage, individually or as part of packages which can include financial options like leasing or power purchase agreements. Other new services include home energy management systems and online usage data.[v]

However, rapid technology change requires consumers to invest time and effort in investigating their options and the payoffs of each option. And some consumers choose not to invest that time and energy. The AEMC summarises,

“Our research on new and emerging technologies found that many customers find new technologies appealing but there are significant gaps in information about what these technologies mean for them.”[vi]

This is an important finding for retailers and policy makers. It demonstrates that while some highly engaged and interested customers will invest the required time an effort to research new technologies and estimate their benefits, other customers may not invest this time.

The results of AEMC analysis indicate the benefit of communicating the savings available to consumers. Consumers can save by shopping around to find a retailer and energy plan that best meets their needs, however the individual consumer is best placed to make an assessment about a plan that suits them. If consumers chose not to invest time and energy into researching power plans that is not necessarily an indication of a market failure, and presents opportunities for more effective communication about saving possibilities.

Retail markets in Australia are still relatively young, with deregulation and full contestability introduced gradually over the last 15 years. As markets mature the depth of understanding of product offerings and effectiveness of retailer communication will deepen as they compete for their segment of the market. The purpose of competition policy in energy is to allow consumers to receive efficient prices over the long term by encouraging competitors to enter the market, increasing product choice and allowing a range of suppliers to offer innovative products and services.  Deregulating electricity retail is an important facilitator: it allows competitive businesses to offer the products and services that consumers demand at the most efficient price.

[i] Jurisdictions analysed do not include Western Australia or the Northern Territory.