At the same time a new facility began operating using novel carbon capture technology designed to pull carbon dioxide out of the atmosphere to allow it to be injected underground and turned into a carbonate mineral.

The Orca direct air capture facility in Iceland, was developed by Swiss Group Climeworks, and uses a system of fans, filters and heaters in eight collectors the size of shipping containers to annually draw 4000 tonnes of CO₂ out of the air and trap it (see image below).

Heat piped into the boxes releases the CO₂ from the filters as a pure gas, after which it is combined with water and pumped deep underground where the gas, mixed with water, will slowly become stone as it cools.

Climeworks entered agreements with Carbfix, a carbon storage start-up, and ON Power, the Icelandic geothermal energy provider, for the project. Iceland was selected because of its geothermal energy supplies and the right underground geology.

It began pilot injections in 2012 at the pilot site near ON Power’s Hellisheidi geothermal power plant in south-west Iceland. That earlier pilot showed that most of the CO₂ injected into basalt turned into carbonate minerals in less than two years. Basalt is very favourable for locking up carbon dioxide, according to Juerg Matter, a geochemist who has focused on carbon dioxide capture and storage via in situ mineral carbonation in basalt. For carbon dioxide to transform into carbonate, the rocks where the gas is injected need to have calcium, magnesium or iron-rich silicate minerals. With those, a chemical reaction occurs that converts the carbon dioxide and minerals into a chalky carbonate mineral[i]. 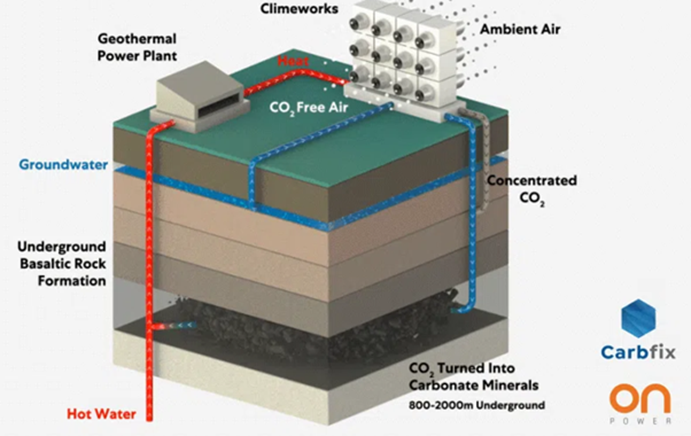 It is not the first plant developed by Climeworks – another direct air capture plant, considered the world’s first commercial facility, was built in Switzerland in 2017, but unlike the Icelandic project it uses the captured gas in greenhouses and sells it to carbonated beverage producers[ii]. That original plant can capture roughly 900 tonnes of carbon dioxide per year. The company has now developed 16 installations across Europe, but the Orca plant is the only one that permanently disposes of the CO₂ rather than recycling it.

Climeworks’ original goal was to capture 1 per cent of annual global CO₂ emissions - more than 300 million tonnes - by 2025, according to Bloomberg. It’s now targeting around 500,000 tonnes by the end of the decade.

As with much new and largely unproven at technology, it is expensive - roughly $800–1084 per tonne of carbon dioxide. Compare that to the current carbon price in Europe, which is approaching AUD$100 a tonne.

Climeworks aims to get the cost down to USD$200 to USD$300 a tonne by 2030, and to USD$100 to USD$200 by the middle of next decade, when it is targeting to have operations at full scale. Only at the lower rate would it become cheaper to use the system than pay a penalty.

In contrast capturing carbon from existing industrial processes with current technology, the cost can be as low as $40 a tonne. That’s because the concentration of CO₂ in those gases can be as high as 10 per cent, rather than 0.04 per cent in the air, according to BloombergNEF.

Apart from Climeworks there are other direct-air capture proponents including US-based Global Thermostat, which abandoned a venture with Exxon Mobil to develop a capable of capturing around 4000 tonnes each year, the same scale as the Orca plant - and Canada’s Carbon Engineering , which is working with Occidental Petroleum to build a plant that can capture around 1 million tonnes of CO₂ from the air annually.

In the race to deal with climate change a range of technologies and approaches are likely to be considered and trialled. Dramatic falls in the price of solar have shown how technological advancements can rapidly change our approach to achieving lower emissions, but many technologies that show early promise can also just as quickly fail to progress.