This year has been remarkable for the number of significant incidents in National Electricity Market (NEM) supply, in particular a fire at the Callide power station, flooding at the Yallourn coal mine and, most recently, another fire, this one at Victoria’s “big battery” (VBB).

The fire at the 300MW, 450MWh battery owned and operated by Neoen at Moorabool near Geelong, began just after 10am on Friday 30 July. Thankfully there were no injuries as a result of the fire, and investigations are now being undertaken by Energy Safe Victoria, WorkSafe Victoria and the CFA to establish the cause.

There is no doubt that the results of the investigations and any learnings that emerge will be closely watched given the growing importance of the technology in electricity grids not just locally, but internationally.

The VBB was scheduled to begin operating before the peak summer demand period this year, but Neoen has indicated it is too early to tell how the commissioning would be affected by the fire with testing to resume only once safety conditions were met. Neoen announced on 28 July that the battery project had been registered with the Australian Energy Market Operator (AEMO) while it reported that the fire occurred during initial testing at 10-10.15am two days later. 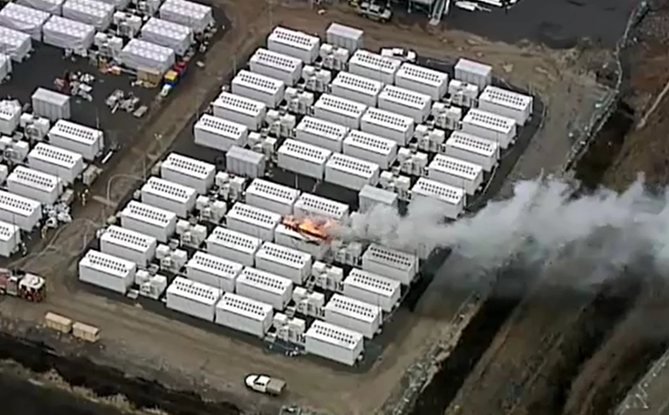 Energy analysts WattClarity noted that the VBB was charging at a low rate at around the time the fire began and produced the following graph from its NEMreview software. 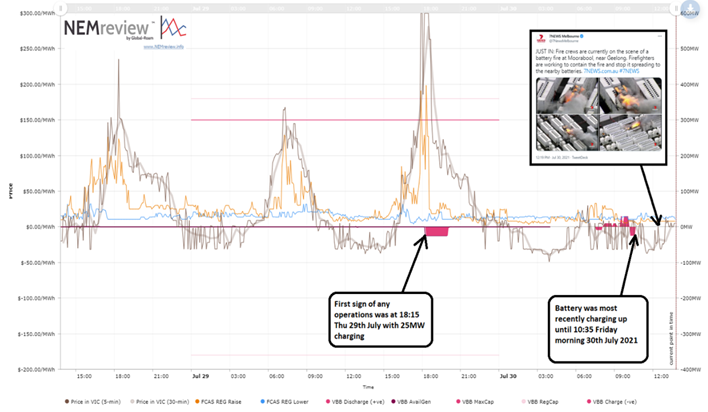 The technology used is not new - the VBB uses 210 Tesla Megapacks, which are pre-assembled, including battery modules, bi-directional inverters, a thermal management system, an AC main breaker and controls in one enclosure. In Australia Tesla’s utility-scale battery technology has been successfully deployed in South Australia’s 100MW/129MWh Hornsdale Power Reserve (big battery), which was considered the biggest battery in the world when it began operations in late 2017. It has been operating very successfully since its commissioning.

There are a range of manufacturers providing battery energy storage systems (BESS) for a growing market. These include LG Energy Solutions, Samsung SDI, Northvolt and Fluence. Challenges posed by the technology are being grappled with by the storage sector generally.

The Victorian fire is one of an estimated 40 incidents internationally that have impacted BESS, according to Paul Christensen, professor of electrochemistry at the UK’s Newcastle University, who has researched lithium-ion battery safety issues. He believes the reviews or investigations could help influence the way battery storage systems are designed and built. Some incidents within large-scale batteries date back to 2012, but most have occurred in the past three years and include four fires at three facilities in the US. More recently there was a fire at a BESS in Beijing, while South Korea has reported multiple fires between 2017 and 2019.

The issue is not confined to large scale battery systems, earlier this week it was reported that in the 12 months to July this year, the ACT Emergency Services Agency responded to at least 16 fires involving the battery storage systems.

One potential trigger for battery fires is what is known as thermal runaway. This begins from overheating of the battery system. The initial overheating can occur as a result of a range of factors including exposure to excessive temperatures, external short circuits or internal short circuits due to cell defects. Internal shorting has been flagged as a predominant reason for thermal runaway. If the cause of excessive heating is not addressed and the heat dissipated it can lead to a domino effect with one cell impacting the next and when undetected it can then result in fire, explosion, sudden system failure, or serious damage to equipment

According to product safety certification, testing and advisory firm UL LLC problems with the flammable electrolyte in lithium-ion batteries can cause "thermal runaway,"  but they estimate that lithium-ion battery cells fail at a rate of only around one in every 12 million.

In their assessment of South Korea’s BESS fires, an expert committee found malfunctions in batteries were to blame. They also pointed to the following key factors:

The expanding role for BESS

We have previously assessed the role of the VBB (Victoria’s big battery: What exactly is it for?) but in short it will effectively increase the capacity of the interconnection between NSW and Victoria and allow higher imports of electricity at certain periods and potentially play a role in the NEM’s frequency control ancillary services markets and provide specialised frequency or voltage control services to AEMO.

Its introduction is the result of concerns from the State Government about system security. The project was intended to increase system security under the System Integrity Protection Scheme (SIPS) via Ministerial Orders. Those orders state the VBB is a “thermal service capable of delivering up to 250MW of continuous power generation for a period of at least 30 minutes to increase the transfer capacity” of the NSW-Victorian interconnector. The costs will be recovered from Victorian energy users.

Reliability and system security concerns in various jurisdictions have emerged in light of the dramatic shift to increased renewable generation in the grid. AEMO has previously identified that with more renewable generation the NEM is likely to need, between 6-19GW of dispatchable resources will need to be in place by 2040 to firm up distributed and utility scale renewable generation. A significant proportion is expected to come from BESS. A BESS can provide grid services like frequency control, avoid network upgrades and help shift the timing of renewable energy production through storage at low demand, high supply periods.

To date there has been a serious of proposals for big battery developments including at:

The amount of energy storage deployed last year rose 62 per cent, according to consultancy Wood Mackenzie, and the market is set to grow 27-fold by the end of the decade.

As with any technology in the energy sector the key is in will be how we manage the risk associated with the technology and undoubtedly given its growing importance in energy deliver the technology will continue to improve.

There is significant work underway globally to improve battery performance. Locally researchers at Monash University have been looking at alternative lithium salt for use in batteries.

The rollout of the technology has been extremely rapid. It is important that they continue to be deployed, and not just for utility scale systems, because there is little doubt lithium-ion batteries are an essential facilitator of the decarbonisation of the energy system, as well as other sectors like transport.