Gas supply and gas generation has again taken centre stage with the release of the most recent Australian Energy Statistics, among other reports. 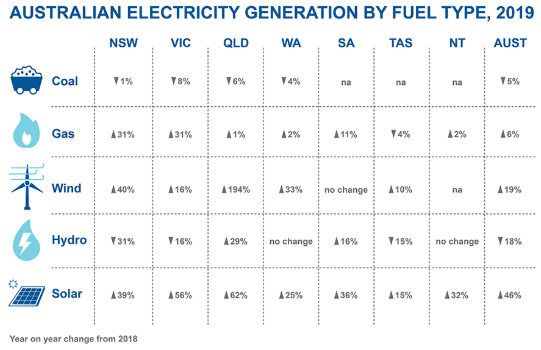 Previously the Government’s Technology Investment Roadmap discussion paper noted that the role of gas to support solar and wind generation with firming gas plants, able generators to ramp up or down. It pointed to the critical role gas played in balancing supply in South Australia and the emissions benefits, noting that while its share of generation has increased, the emissions intensity of the local grid has fallen (see figure 2). And according to the International Energy Agency (IEA), switching from coal to gas can provide ‘quick wins’ for global emissions reductions and has the potential to reduce electricity sector emissions by 10 per cent[ii].

The Chief Scientist, Alan Finkel, believes that Australia is going to need to rely on gas generation to support renewables for the next 10 to 20 years and potentially for up to 30 years[iii].

While gas-generation has played a relatively small part in the National Electricity Market’s (NEM) generation mix, its ability to deliver quick, reliable supply when needed has given it a crucial role[iv]. Along with hydro and storage, gas generation will continue to play a part in managing the variability of wind and solar.

With increasing amounts of renewable generation in the NEM, annual demand for gas-fired power generation (GPG) and with it gas supply, can be expected to become increasingly subject to variations in weather conditions year-on-year.

While more gas generation is likely to be introduced to the NEM it is likely to be predominantly in the form of peaking plants - open cycle gas turbines (OCGT) and reciprocating engines (a more advanced version of this technology was used in the Barker Inlet Power Station built in South Australia, which was covered in depth in Barker Inlet: A new technology responding to the market).

Currently there is more than 13,000MW of gas-fired generating capacity in Australia with more than 9,000MW in the NEM[v] (see list at end of this article). In 2018-19 a total of 23, 971 GWh of electricity was provided by gas-fired plants across the country. A further 845MW (combined cycle gas turbine plant) and 1837MW of OCGT proposed for the NEM[vi] (see figure 3). 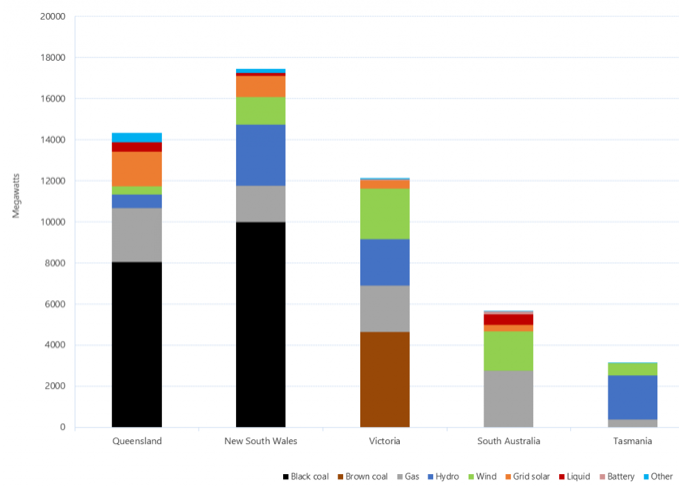 The amount of gas generation (and gas required) is likely to shift substantially year to year and beyond weather events and patterns will be impacted by factors like new transmission, the availability of other plant as well as overall energy demand.

In the first quarter of this year, GPG in the NEM decreased by 566 MW on average compared to Q1 2019, largely due to lower operational demand and increased renewable output in southern regions[viii]. There were large reductions in South Australia (down 266 MW) and Victoria (down 148 MW), while there was only a slight reduction in Queensland (22 MW).

In its latest Gas Statement of Opportunities (GSOO)[ix], AEMO’s longer-term forecasts are for relatively flat gas consumption, with a primary reason lower long-term outlook for GPG (see figure 2). This is based on projections of reduced electricity demand, greater interconnection between regions, and more renewable generation.

AEMO has forecast gas demand for GPG to drop in the medium term, with additional transmission and as a result GPG being less relied on for firm supply. As more coal generation retires in the long term, however, demand for GPG is forecast to grow back to near 2020 levels. 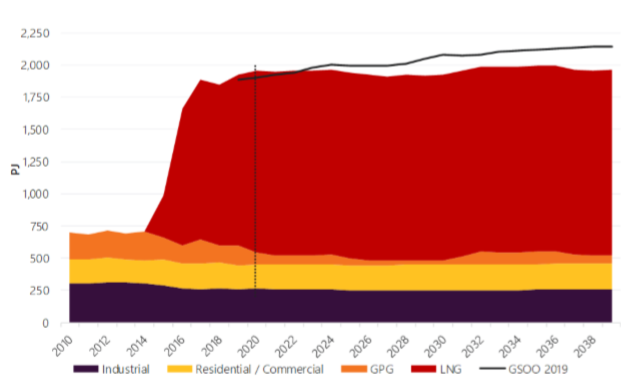 With the demand for gas for generation, LNG exports, residential and commercial use and industrial and manufacturing operations, AEMO has forecast that gas production from only existing and committed gas developments should provide adequate supply until between 2023 and 2025 (depending on the scenario)[x].

AEMO’s GSOO shows gas supply adequacy across the outlook is highly uncertain, particularly between 2022 and 2024 when projected tightness in the east-coast gas supply-demand balance coincides with key uncertainties in the electricity sector that may impact peak day and annual gas supply outlooks.

Factors that could impact gas generation and gas supply include a shift in the timing of forecast new transmission, renewable generation or storage (including Snowy 2.0) developments or if the projects don’t proceed.

Other uncertainties on gas projections include:

[i] https://www.energy.gov.au/publications/australian-energy-statistics-table-o-electricity-generation-fuel-type-2018-19-and-2019 - These statistics cover all electricity generation in Australia, including by power plants, businesses and households.