Barker Inlet: A new technology responding to the market

At the end of 2019 AGL successfully commissioned the 210MW gas-fired Barker Inlet Power Station in South Australia. This major new investment occurred entirely in response to market signals, i.e. without subsidies. The power station employs reciprocating engine technology that has not previously been used in Australia at this scale, and provides remarkable flexibility in supplying on-demand power. Despite being fossil-fuelled, this flexibility will actually help Australia’s transition more rapidly to an almost fully de-carbonised electricity grid.

We take a closer look at the technology and how it supports the transition.

Whilst gas-fired generation has always been a relatively small part of the National Electricity Market’s (NEM) energy mix[i], its capacity and its ability to deliver quick, reliable supply when needed has always been crucial[ii]. 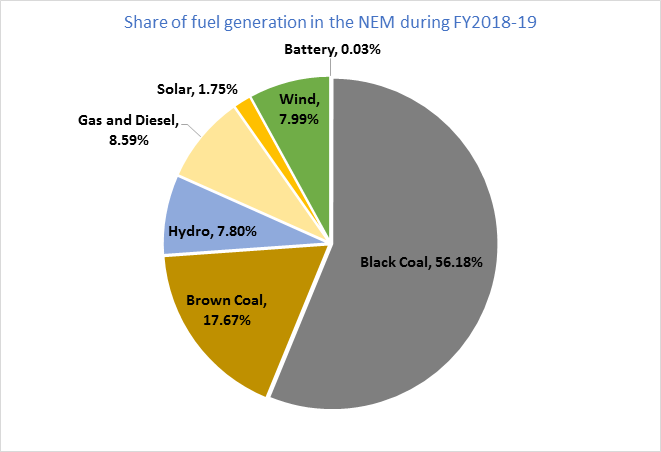 At the time of the first Garnaut Climate Change report in 2008 it was assumed that gas-fired generation would be a “bridging fuel” between coal and zero carbon sources due to its lower carbon intensity (around half that of coal) until eventually new zero carbon sources became commercial (which were then predicted to be mostly the non-intermittent sources of solar thermal, geothermal, nuclear and carbon-capture). During that bridging period, which would last several decades, gas was anticipated to move down the merit order, i.e. to take up much of coal’s energy shares in the chart above. Gas would move from a peaking fuel to a base-load.

These predictions proved false. Partly this was due to a lack of the carbon pricing necessary to make natural gas competitive with Australian coal. But, also unexpected, dramatic falls occurred in the price of wind and photovoltaic solar, whilst the non-intermittent zero carbon sources failed to advance.

However their intermittency has in turn consolidated the future of gas-fired generation in something akin to its historical role – as a form of peaking and back-up generation. Over time coal-fired energy shares in the pie chart above will be mostly replaced with wind and solar, but management of their intermittency will require support from each of hydro, storage and gas.

Whilst the role of storage (battery and pumped-hydro) will grow and provide some of the back-up, realistically it will not eliminate the need for gas anytime soon. Storage is very expensive and only gradually declining in cost. Battery storage will provide frequency control, and a few hours energy after sunset, however during still, cloudy weeks, there appear few practical alternatives to gas once the storage capacity is emptied.

As we lose the firm capacity of coal, the installed capacity of gas will need to grow not shrink, but that does not mean gas fired generation emissions need necessarily grow; they may even decline. It will be providing reserve capacity, not bulk energy. Even in a “net zero carbon” economy expected later this century, it may remain economic to retain gas in this role, offsetting its small emissions with negative carbon sources.

There is a surprisingly diverse number of ways to use the heat from hydrocarbon[iii] combustion to make electricity. The NEM has at least four main types:

1. Steam Turbine: Fuel can be burned in a conventional steam boiler in a similar way to coal with the steam driving a turbine. Like a coal plant, these take several hours to start in order to progressively warm the turbine. They also have a minimum stable output, but which is lower than a coal plant at around 20 per cent of full load.

Examples include Newport and Torrens Island “A” and “B” Power Stations. This is now a legacy technology as by the 1990’s their costs, efficiencies and flexibilities could all be bettered by technologies two and three.

2. Open-cycle gas turbine: This is effectively a stationary jet-engine. Air is first compressed, then heated and expanded by combusting fuel in it, then released through a gas turbine. The “gas” in the name actually refers to the turbine’s working fluid, (i.e. gaseous air) not the fuel. They can operate on gaseous and liquid fuels, but not solid fuels like coal.

These are cheaper and quicker to build than steam boilers. They are also more flexible, with start-up times typically between 10-20 minutes[iv].

Historically they had low energy efficiency, however technological improvements, many from the aviation industry, have improved them to the point they now can now exceed our older steam plants. Whilst they can operate at variable output, their efficiency degrades substantially so after starting, owners prefer to run them at maximum output.

There are numerous examples of this technology across the NEM, and in most power systems.

4. Reciprocating engine: This is effectively a large internal-combustion engine with cylinders and pistons conceptually similar to those used in transport. Thanks to a century of detailed design, these have efficiencies similar to the best open-cycle gas turbines, with similar build times and slightly higher capital costs. Where they really stand out however is in their flexibility, discussed further below.

The NEM already had some smaller examples such as Port Stanvac and Angaston in South Australia (diesel-fuelled) and Appin and Tower in New South Wales (coal-mine methane fuelled) all approximately 50MW each. At 210MW, Barker Inlet is Australia’s first very large-scale reciprocating engine, and unlikely to be the last.

US manufacturers Cummins and Caterpillar are well-known builders of small and medium-scale reciprocating engines and typically supply them for remote power supplies, e.g. mine sites. Finnish company Wartsila historically specialised in marine engines but has moved that knowledge into large, grid-connected power stations. They supplied the Barker Inlet equipment.

Barker Inlet comprises 12 x 17.6MW engines. If, for example, 100MW was dispatched by the Australian Energy Market Operator (AEMO), then only 6 of the engines would start and operate near full load. Being able to quickly start up and shut down individual engines means that at any desired output each operating engine can run close to its maximum efficiency level. And with many small discrete engines, forced outages only affects a small amount of the total capacity at any one time.

But where the reciprocating engine particularly stands out is its rapid start capability. The plant can synchronise to the grid within 90 seconds of receiving a start signal, and reach full load less than four minutes later. And the additional maintenance cost penalty of every start and shut down is very minor. These characteristics mean its operational flexibility approaches that of hydro plant.

The Barker Inlet plant is dual fuel, natural gas and diesel, which provides electricity security in the case of gas supply disruption or economic unavailability. An interesting feature of internal combustion engines is that diesel ignites on compression whereas natural gas requires a spark. Barker Inlet solves this problem by injecting a very small amount of diesel with the natural gas, which the compression will ignite in turn igniting the natural gas. 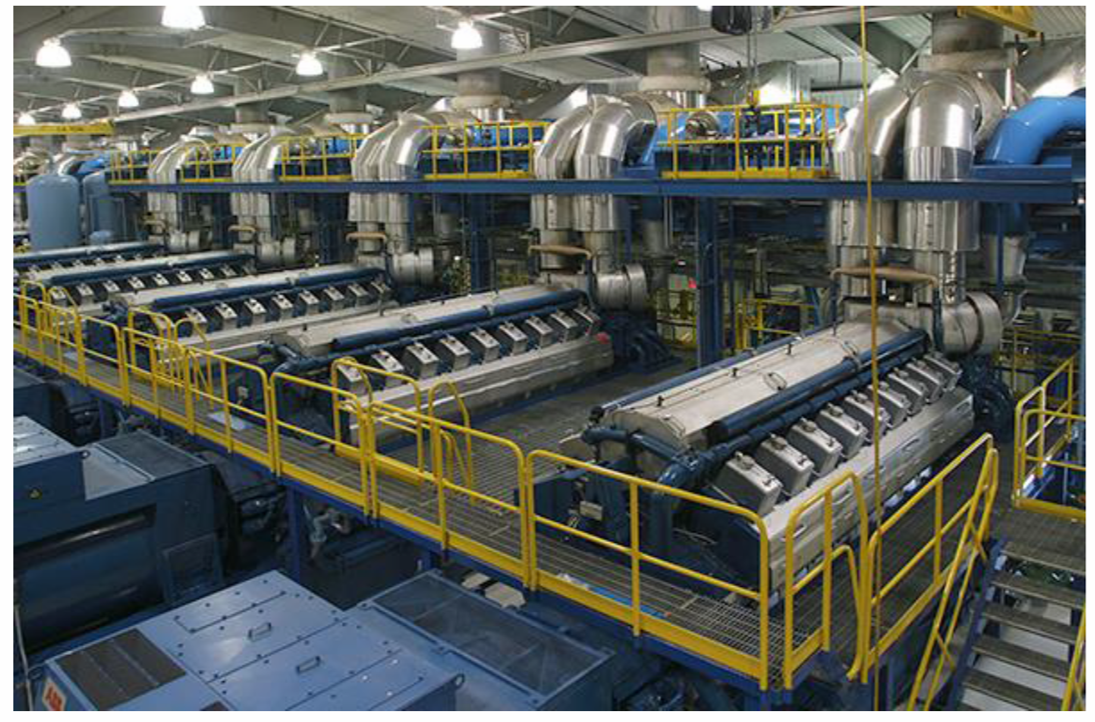 Why it suits the market

Wind and large-scale solar plant are not only intermittent, but are also challenging to forecast, notwithstanding the impressive achievements in AEMO’s Australian Wind/Solar Energy Forecasting System (AWEFS/ASEFS). Events can still occur where a widespread and relatively large change in output can surprise. For example, on the very hot 20 December 2019, Victorian wind output produced 1000MW less than what had been forecast only three hours earlier[vi].

South Australia, with its very high penetration of these technologies has historically been the most volatile NEM region in terms of supply/demand and ultimately price. The introduction of five-minute settlement in 2021 will further sharpen this price signal.

In this market the ideal back-up plant is one which can be easily shutdown at times of surplus and be very quickly re-started in shortfall, and, having started, cleanly follow a variable dispatch level producing only the amount of energy required.

Conventional power system dispatch places the slowest and cheapest plant at the bottom of the merit order, whilst more expensive, flexible plant is used last. AGL has a peculiar challenge in operating Barker Inlet in tandem with their legacy steam turbine plant, Torrens Island, which is both less flexible and more expensive to operate.

[i] Note: Gas-fired generation has always had a much larger share of the energy mix in the Western Australian and Northern Territory grids.

[iii] Hydrocarbon fuels include natural gas and liquid fuels, such as diesel, but exclude solid fuels such as coal and biomass.