Gas and wholesale prices: A market at work

Earlier this month, the oil industry experienced two significant disturbances, firstly as a result of measures to contain the spread of Covid-19, and the expected reduction in consumer and industry demand, and secondly due to the supply side price war between Saudi and Russian oil producers. These disturbances drove a sudden price collapse of more than 30 per cent in the oil and gas markets, and left the Brent Oil forward curve in very steep contango, as seen in figure 1[i]. In August 2019 the Brent oil futures were expected to remain stable around USD$60 for 2020, however now, eight months later, the forward Brent oil price has reduced to the high USD$30s for 2020.

The oil price plunge has weighed heavily on LNG ventures as oil prices flow through into LNG contract prices with a lag of about three months[ii]. The conditions make it harder for new projects, such as Woodside Petroleum's AUD$16 billion Scarborough LNG project in Western Australia and Santos's $7 billion Barossa gas project off the north coast, to go ahead. Santos said it needs a price of approximately $100(currently equivalent to USD$60) a barrel to fund growth projects and to maintain gearing in the absence of asset sales[iii].

Leading Australian gas analyst EnergyQuest said although the impact of the outbreak on Australia’s LNG deliveries has so far been minimal, exporters will feel the impact of current market conditions on their revenue in Q2 2020[iv]. Australia’s two biggest LNG customers are China and Japan, and these two countries’ transport, commercial and industrial sectors have all been affected by the fast-spreading outbreak. EnergyQuest highlights that despite conditions for domestic gas buyers easing as gas demand in China falls, the outlook for gas on Australia’s east coast remains uncertain. 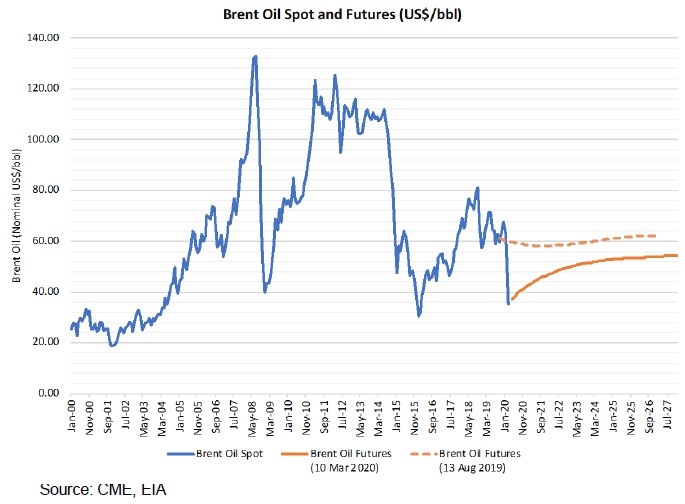 During 2019, the Australian domestic wholesale gas price market hubs at Adelaide, Sydney, Brisbane and the Declared Wholesale Gas Market (DWGM) in Victoria each saw a fall in price in the third quarter. The downward trend is clearly evident in STTM in Brisbane as shown in figure 2. This trend was driven by lower priced offers due to low international gas prices, reduced electricity prices and increased Queensland gas production[v].

Figure 2: Daily ex-post price in STTM in Brisbane in the last two years 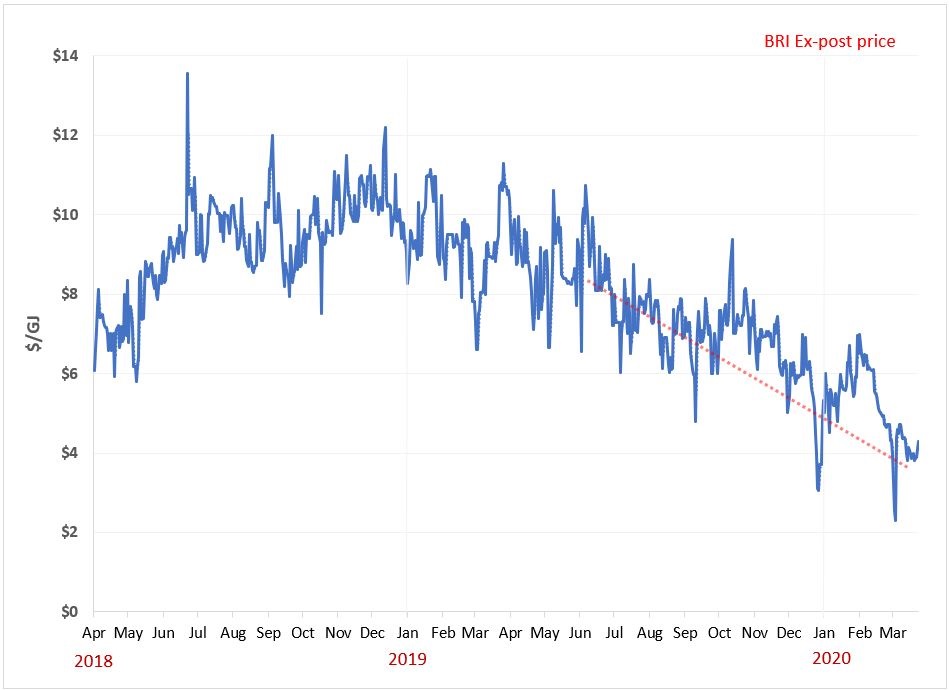 Summer 2019/20 continued to see a decline in wholesale gas price, with an average of $6.23/GJ, 38% lower than the previous summer (Summer period includes December, January and February in Australia. Average wholesale gas price for summer 2019/20 is calculated across STTM in ADL, BRI and SYD and VIC DWGM). Except for the Adelaide gas market, short-term domestic gas prices in February fell to an average of $5.54 per gigajoule (GJ) in Brisbane, $5.92/GJ in Sydney, and $5.87/GJ in Victoria, down from $5.68/GJ, $6.33/GJ, and $6.28/GJ respectively in January. This is also far lower than the short-term prices that were near the $10/GJ mark just one year ago.

Figure 3 shows the historical trend of daily gas price traded across the STTM and DWGM, highlighting the summer period and its average gas price. The domestic gas price generally peaks in winter when householders increase the gas usage for heating. 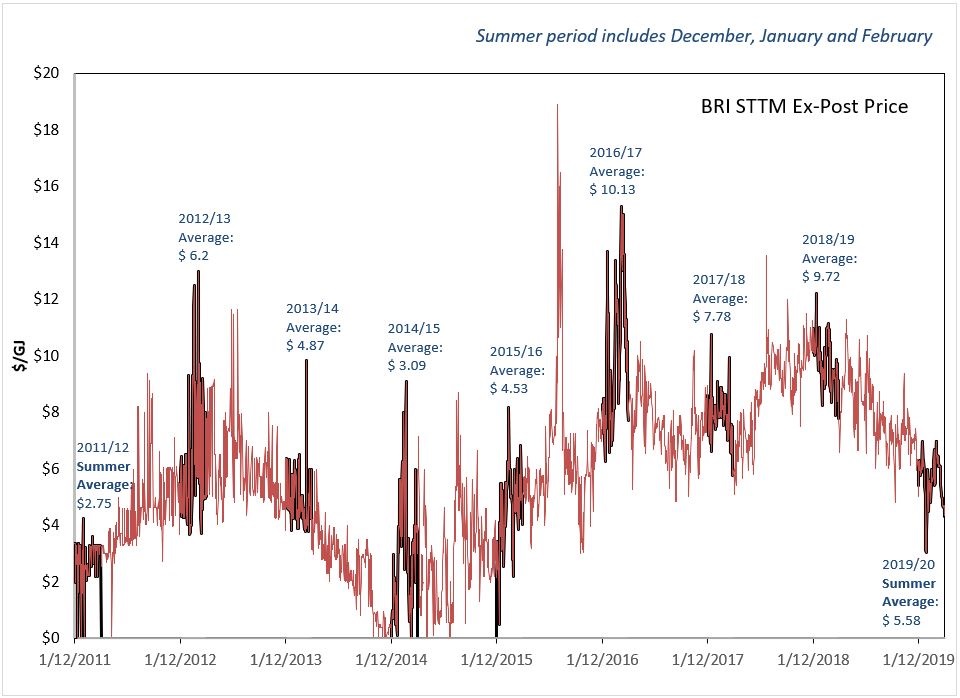 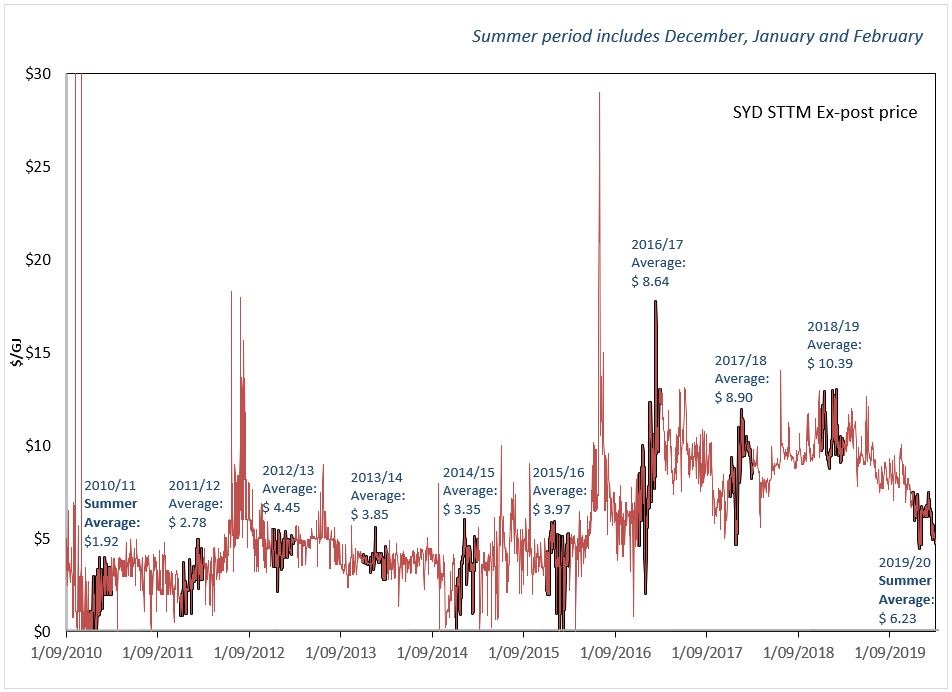 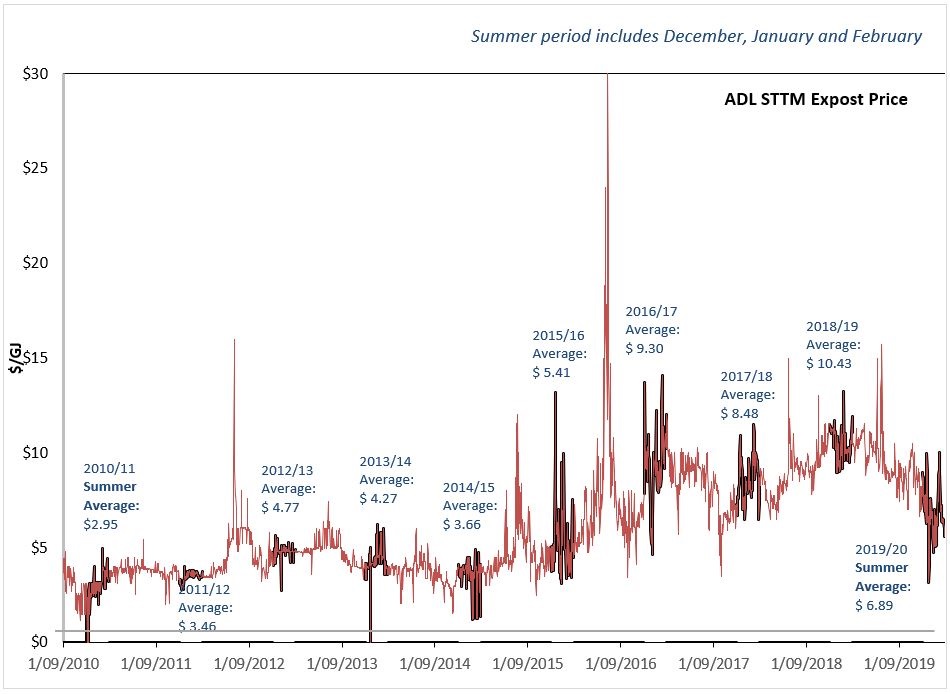 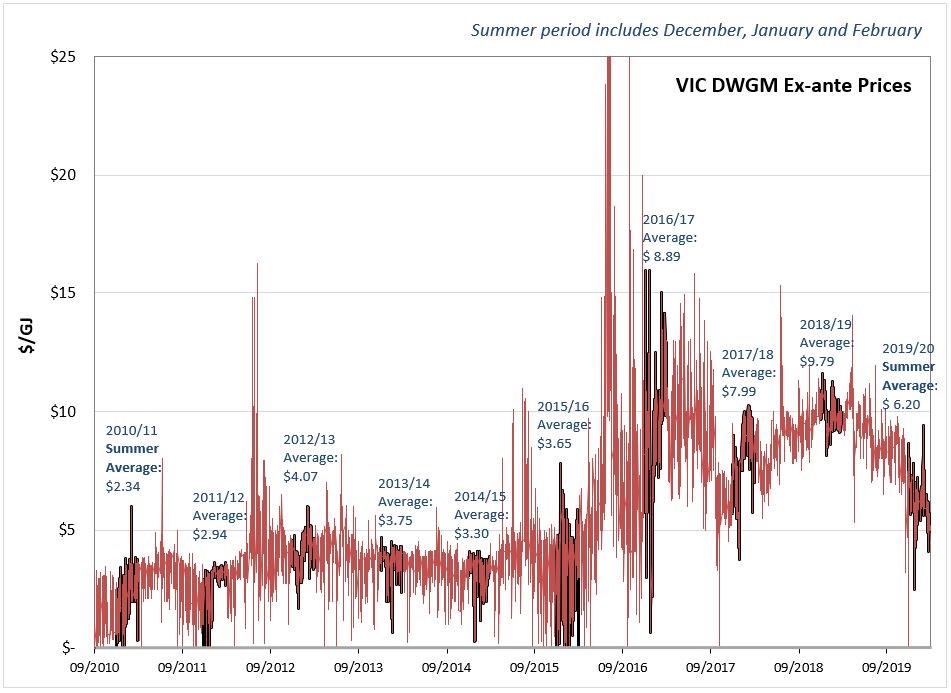 Last week, the Victorian Government announced a removal of the moratorium on gas exploration within the state from July 2021. The announcement was made after confirming that Victoria had gas reserves, which could be extracted without major environmental impacts. This may exert further downward pressure on household and industrial gas prices in future, and create jobs in the Otway Basin and East Gippsland, where gas reserves are located[vi].

2017 saw highly volatile gas prices due to the expansion of Queensland’s liquefied natural gas (LNG) industry that drew an unprecedented volume of gas from the domestic market. In addition, there were large brown coal plant closures (Hazelwood and Northern) plus difficulties for NSW power stations in securing black coal. These events conspired to tighten supply with resulting high electricity prices across the National Electricity Market (NEM) despite electricity demand remaining flat[vii]. 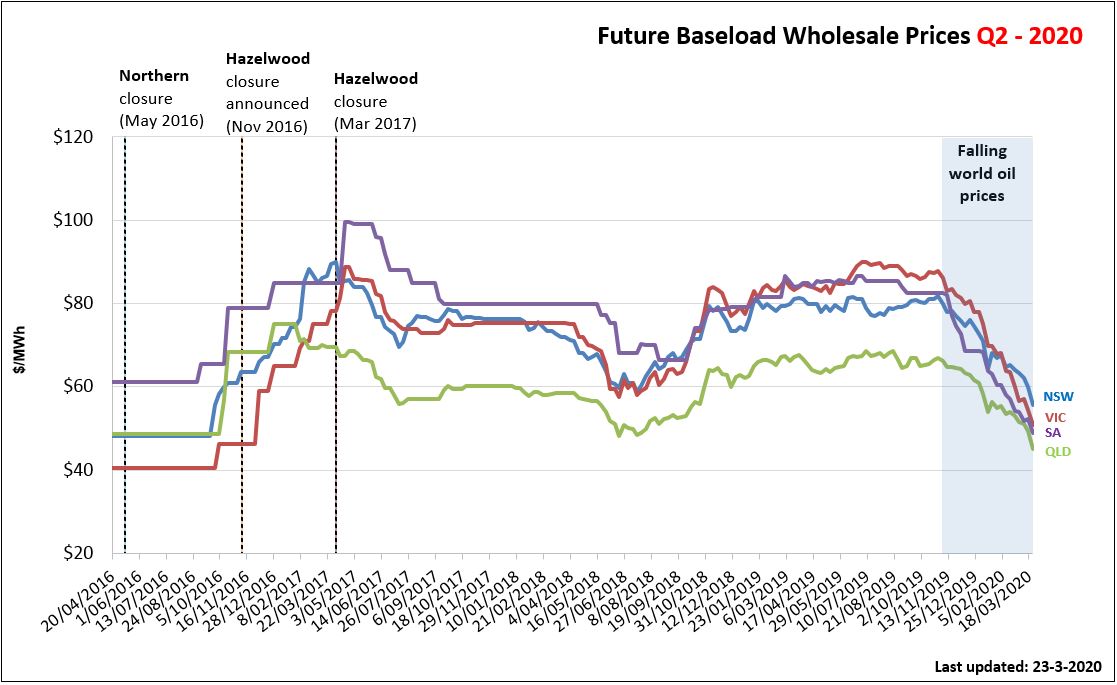 The movements in the electricity price are therefore easily explainable through market fundamentals – higher input costs in 2017 and lower input costs in 2020. After the rise in electricity prices, the Australian Energy Regulator published a well-researched report that unpacked exactly these issues[viii]. In contrast, subsequent reports by the Australian Competition and Consumer Commission[ix] and another by the Victorian Energy Policy Centre[x] each blamed the exercise of generator market power in NSW. At the time, the AEC criticised this interpretation[xi].

Recent dramatic falls in NEM electricity prices followed the domestic gas market which has in turn followed the world hydrocarbon market. This demonstrates these markets working as expected. Given NEM market structure and demand have not changed much since 2017 it is hard to see how it could be suggested that the level of generation competition has had any material impact on electricity price outcomes – either high or low.

As energy consumers, we are always looking at more efficient and cost-effective ways of heating and cooling our homes and workplaces. In the southern parts of the country, gas remains a mainstay of heating as many still think it is cheaper than electricity, which is often not the case. But is degasification plausible?

Aug 19 2021
Read Analysis
GET IN TOUCH
Do you have a question or comment for AEC?