A recent study on the use, limitations and cost of hydrogen blending in the European gas grid shows that adding 20 per cent hydrogen to the grid would increase industry costs by an average of 23.8 per cent across the European Union (EU), and up to 43.3 per cent in Portugal.

Due to smaller user volumes households would see prices, on average, rise 11.2 per cent across the EU, and 15.9 per cent in Portugal.

The report by Fraunhofer Institute for Energy Economics and Energy System Technology (IEE), for the European Climate Foundation, assesses the technical feasibility, emission savings and cost impacts of adding hydrogen to the existing gas transport network, through “hydrogen blending” (which the report defines as, “the blending if hydrogen with natural gas at the level of the gas grid”).

Natural gas currently accounts for at least 22 per cent of the EU’s greenhouse gas emissions. While hydrogen demand in the EU is currently mostly produced by using natural gas or coal (“grey hydrogen”).

The European Commission (EC) wants to make the EU a pioneer in the use of green hydrogen, that is generated using renewable energy. In 2020, the EC presented its hydrogen strategy with an aim to make widespread use of green hydrogen possible “across all hard-to-decarbonise sectors” from 2030 onwards.

The EU, made up of 27 member states, is planning to install 40GW of electrolysers by 2030, which would produce around ten million tonnes, or about 132TWh, of green hydrogen annually. However, to achieve 2050 climate targets (previously covered here) the EU would need to decrease emissions by reducing the use of natural gas in the buildings, industry and power sectors where the fuel currently plays a major role.

To capture the impact of gas demand, the study analysed three scenarios:

According to the study blending 20 per cent green hydrogen - the maximum proportion that could safely be burned in domestic boilers - to Europe’s distribution networks will increase end-user costs by up to 43 per cent due to its complexities. Yet it would only reduce carbon emissions by 6-7 per cent due to the lower heating value of hydrogen compared to natural gas.

Britain’s gas grid is currently preparing to accept a blend of up to 20 per cent hydrogen by 2023 as part of decarbonisation efforts.

Yet the agency argues that other uses of that hydrogen could see greater reductions in emissions and focus should be on “no-regret” sectors. It suggests higher greenhouse gas emission reductions (up to 50 per cent) can be achieved by using it in sectors where there are currently few alternatives for decarbonisation, such in the transport sector and industrial applications, and for the replacement of grey hydrogen.

The report points to the replacement of coal, diesel, bunker fuel, and aviation fuel, which have higher carbon contents than natural gas. It also states industries such as fertilisers, steel, shipping, and aviation, “would avoid lock-in risks, generate greater greenhouse gas savings for the investments made and avoid added costs being put on all gas consumers.”

Figure 1 shows the differing applications for direct hydrogen. It ranks each application’s energy efficiency – increased or reduced energy consumption, and therefore the renewable expansion requirements (covered in more detail below) - alongside infrastructure requirements.

Figure 1: Comparison of efficiency in regard to energy demand by sector (view larger image here) 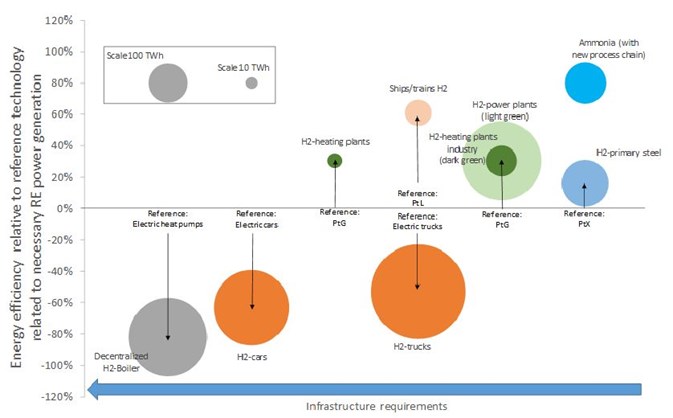 “Blending green hydrogen into the grid indiscriminately instead risks ‘wasting’ hydrogen by having it deployed to sectors like heating where more efficient and cost-effective solutions such as direct electrification using heat pumps are possible.”

The analysis shows that a 5 per cent blending target within the EU scenario would require around 50TWh of hydrogen - a large share of the total green hydrogen (132 TWh) available in 2030 under the EU’s hydrogen strategy. The agency suggests this 50 TWh could instead be used to meet demand in other “no-regret” applications.

“In view of the limited amounts of green hydrogen that will be available in 2030, it is important that these should find concrete applications with high CO2 reduction potential, instead of being ‘poured as if with a watering can’ into the natural gas network where it will offer limited CO2 reduction.”

While the study agrees direct green hydrogen use has “clear advantages” for achieving climate targets, it also warns investment decisions must take “long-term efficiency into account”.

It highlights “technical challenges” of a gas grid that contains 20 per cent hydrogen, including potential issues with the origin of natural gas, transport pipelines, compressors, elastomer seals, gas meters, burners, storage sites and industries that would not be able to function with an H2/methane mix, such as glass and ceramics.

In the medium-term the limiting factor is the availability of green hydrogen – and the development of infrastructure needs to be considered, as additional renewable energy capacity must be built to cover the hydrogen production. Accommodating hydrogen into gas grids requires new investment, which will increase operating costs and impact end-user gas prices in the EU.

There’s also interconnected impacts; according to the agency hydrogen blending “represents a lock-in effect as area-wide adaptation measures would have to be financed that are neither necessary nor sustainable in the long term”.

Figure 2 shoes blending levels up to 5 per cent still results in modest price increases for all customer groups – an introduction in one country means all other countries need to take adjustment measures due to cross-border trade (or gas trade would have to be restricted, if technically allowed).

While it’s clear that hydrogen blending has advantages, the agency highlights that policy makers face a choice of how to cost-effectively deploy the limited amounts of green hydrogen in the medium-term and targeting its application to ‘no-regrets’ sectors should be considered.

According to the report:

“Hydrogen blending is not a no-regrets option towards 2030. It is suboptimal because it does not specifically target end-uses for which hydrogen is generally agreed to be needed and imposes additional costs for lower greenhouse gas savings compared to using hydrogen directly. Therefore, H2 usage should be limited to areas where it is needed and cannot be substituted by electricity.”