European Union plans to get “Fit for 55”

Last Thursday, the European Commission unveiled a suite of new environmental policies under its “Fit for 55” legislative package, which highlights the European Union’s (EU) attempt to meet its 55 per cent net emissions reduction target for 2030.

The package includes policies to phase out all combustion engines by 2035, increase renewable energy generation to 40 per cent by 2030, tax aviation fuel, and introduce a carbon border adjustment mechanism (CBAM). It is this last policy, the CBAM, that has received the most international media attention, including within Australia.

So what might it mean for global efforts to address climate change?

What is a Carbon Border Adjustment Mechanism?

The CBAM is a policy tool that places a levy on certain imports based on the carbon emissions associated with their production. The intent of the levy is twofold: to prevent carbon leakage (the problem of industries transferring polluting production to countries with less stringent climate policies) and ensure European industries are not placed at a competitive disadvantage by ambitious local environmental policies.

The European Commission has produced a Q&A that explains how the CBAM will work. It will initially only apply to those sectors at the highest risk of carbon leakage: aluminium, cement, electricity generation, fertiliser, and iron and steel. From 2023, importers will be required to report the embedded emissions of the above goods (if information cannot be obtained, a default value will be applied) and then from 2026, pay a financial adjustment. This adjustment will be paid through the purchasing of CBAM certificates, the value of which will be calculated depending on the weekly average auction price of the EU Emission Trading Scheme (ETS) allowances.

Importers can avoid paying the CBAM levy if they can prove that their goods were produced in another country with a sufficient carbon price. In this way, it is hoped that the CBAM will incentivise domestic carbon pricing around the world.

How have non-EU countries responded?

Since the policy was floated, it has received sharp criticism from some countries that it is simply a form of protectionism. China, Brazil, India, and South Africa released a joint statement in April 2021 that expressed ‘grave concern’ about unilateral carbon border adjustment policies, describing them as ‘discriminatory and against the principles of Equity CBDR-RC [Common But Differentiated Responsibilities and Respective Capabilities]’.

In Australia, where no carbon pricing policy is in force, Federal Trade Minister Dan Tehan has labelled the CBAM a new form of protectionism that is ‘more about raising revenue than really reducing emissions’. Nonetheless, the EU has defended its policy, saying the CBAM is targeted at industries, not countries, and is an effort to level the competitive playing field between industries that incur carbon pricing and those that do not. Furthermore, the World Trade Organisation has shown sympathy in the past to other domestic border adjustment policies, considering them to be legal.

A second concern is whether the EU has the social legitimacy to enforce a CBAM, given it has the indirect (but intentional) effect of pressuring other countries to introduce carbon pricing (which is then subject to the EU’s interpretation of whether it is sufficient). This is especially true for developing countries. While the carbon emissions of some developing countries are now very high, these countries point out that it is because they are only now industrialising, whereas Europe did so many decades ago (and therefore has a substantial historical trail of carbon emissions, which it never had to pay for). The figure below illustrates the carbon emissions of countries in 1960 compared to 2019.

As can be seen, the EU’s emissions in 1960 were more than twice as high as China and India’s combined. Of course, without getting these developing countries on board, global efforts to decarbonise will be futile. One potential solution to this dilemma is for the EU to use the revenue generated through the CBAM to support the uptake of cleaner production technologies in other countries. This would have the twin benefit of reducing carbon emissions and creating a more collaborative, international carbon trading system.

What impact will the CBAM have?

Figure 2 highlights the top twenty most trade exposed countries to the CBAM.

Figure 2: 20 most exposed countries in terms of aggregated value of exports (billion $) 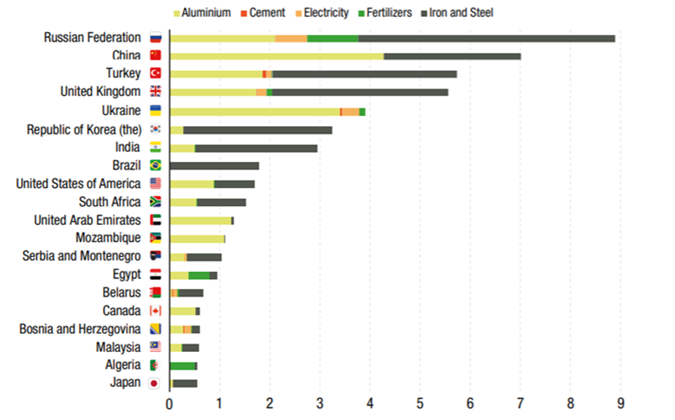 While at this stage it is difficult to measure the projected impact on trade, Russia has forewarned that its companies stand to lose over $7 billion under the levy. Closer to home, the EU is not a major importer of Australian goods so the impact on Australian exports should be minimal, even more so now that the CBAM has decided to exclude “scope 2” emissions from calculations (i.e. the carbon emissions released from the electricity used to make a product). Nonetheless, there may be some flow-on effects for Australia if tariffs are imposed on trade-exposed industries in places like China, which rely on Australian coking coal to make and then export their iron and steel to the EU.

Arguably more importantly, preliminary modelling from a United Nations Conference on Trade and Development report indicates the CBAM will drive only meagre carbon reductions. If this proves correct, it may give credence to earlier concerns that the CBAM is more style than substance. But, it also may end up overlooking the CBAM’s true impact: the precedent it sets in terms of international norms for addressing climate change. Already, the proposal is seemingly wielding influence on climate policy in other countries: the US Democrats are now proposing to introduce a border carbon adjustment tax as part of a broader $US3.5 trillion plan to reduce greenhouse gas emissions. Meanwhile, both Japan and Canada have indicated an early intent to explore the feasibility of their own carbon border adjustment mechanism policies.

Despite the initial fanfare, it will be some time before the true impact of the CBAM on international trade and carbon emissions is known. Paradoxically, the biggest sign of the CBAM’s success may ultimately be its own demise: if it can incentivise countries to introduce domestic and sufficient carbon pricing, then the CBAM will become superfluous. Until that day comes, however, border adjustments are likely to be an increasingly used tool in international efforts to mitigate climate change.