Energy prices: A look at the AER and ABS

The Australian Bureau of Statistics (ABS) December 2015 statistics show annual decreases in the Electricity Consumer Price Index (CPI) across three of Australia’s eight capital cities[i].  And data shows a 0.1 per cent annual fall in energy CPI across Australia. Despite these results the ABS is still expected to review its coverage and pricing strategy to include market offers, with over two thirds of customers on electricity and gas market retail contracts in New South Wales, South Australia and Victoria. The Australian Energy Regulator’s (AER) recent retail performance report includes market offers in their findings, which differ to the results released by the ABS especially in the deregulated states.

The energy price falls vary across the cities: Adelaide experienced the largest decrease in electricity prices, followed by Canberra and Sydney. One factor behind the decrease in Sydney, Adelaide and Canberra is the change in network prices due to AER determinations. Figure 1 shows annual changes in electricity prices for each capital city as of December 2015. Adelaide saw the largest decrease of 8.1 per cent annually, then Canberra and Sydney, which fell by 4.6 and 4.5 per cent respectively. On the other hand, Perth and Hobart experienced increases of 6.1 and 1.9 per cent respectively.

As at December 2015 gas prices had increased across Australia by 1 per cent for the 12 months prior. Figure 2 shows the annual movements in gas prices across Australia. The decline in gas prices in Sydney is primarily due to the Independent Pricing and Regulatory Tribunal (IPART) decision to reduce regulated retail gas prices by an average of 3.9 per cent across NSW from 1 July 2015[iii]. This was largely due to the AER’s recent decision to significantly reduce network prices for those customers in the Jemena gas network, the largest network in NSW[iv]. 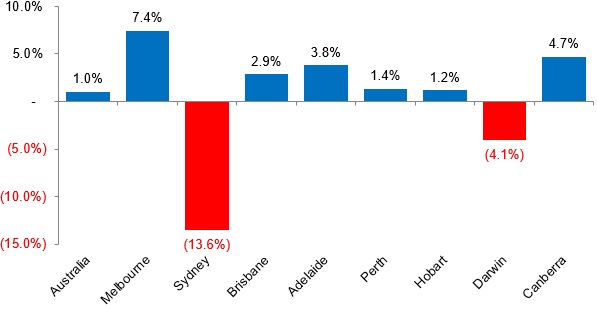 Currently ABS data produces seasonally adjusted estimates at the state level for some economic statistics but does not perform seasonal adjustments for the CPI. The original CPI electricity and gas series at state level does not, therefore, include adjustments due to seasonal impacts on estimates.  The ABS is currently reviewing its coverage and pricing strategy and its main challenge is the availability of data for market offers.

One source for electricity and gas prices data could be the AER. In their recent annual report on the performance of the retail energy market in Australia the AER used both median market and standing offers in each jurisdiction. The AER uses median, rather than a simple average, in order to ensure the analysis is not skewed by a small number of very cheap or very expensive offers.

According to the analysis by the AER, customers on standing offers made considerable savings by switching to a market offer. In jurisdictions where electricity market offers are available, the median market offer was between 5 and 20 per cent cheaper per year than the standing offer[vi]. The potential savings were slightly smaller for gas market offers at 16 per cent.

What does the Australian Energy Regulator report show?

Between June 2014 and June 2015, electricity bills decreased by between 3 and 15 per cent in most jurisdictions, with the exception of Queensland, where bills increased by 4 per cent. Gas bills decreased in Victoria and the ACT, and increased in New South Wales by 7 per cent. Queensland and South Australia also had small increases. Over this period the primary reason for the decrease in energy bills was the removal of the carbon tax.

Australian Energy Council analysis shows that electricity bills fell more in the Victorian and South Australian deregulated markets than the price changes reported in the ABS data. Figures 3 and 4 shows the difference between the data for electricity and gas respectively. The difference for ACT gas prices is partly due to median market offer for gas being cheaper than the median standing offer, whereas in previous years it was the opposite. This is likely to be due to the emergence of competition and use of conditional discounts. [vii] Source: AER,ABS Note: Comparing AER and ABS data we have assumed bills and prices movements have minimal difference and City and State data is predominantly dependent on the distributors so we have used States across both for simplicity.

[viii] Source: AER, ABS Note: Comparing AER and ABS data we have assumed bills and prices movements have minimal difference and City and State data is predominantly dependent on the distributors so we have used States across both for simplicity.