Electric vehicles (EV) represent an opportunity at many levels of the Australian environment and economy.

In its Net Zero by 2050 paper the International Energy Agency (IEA) envisions a world where by: 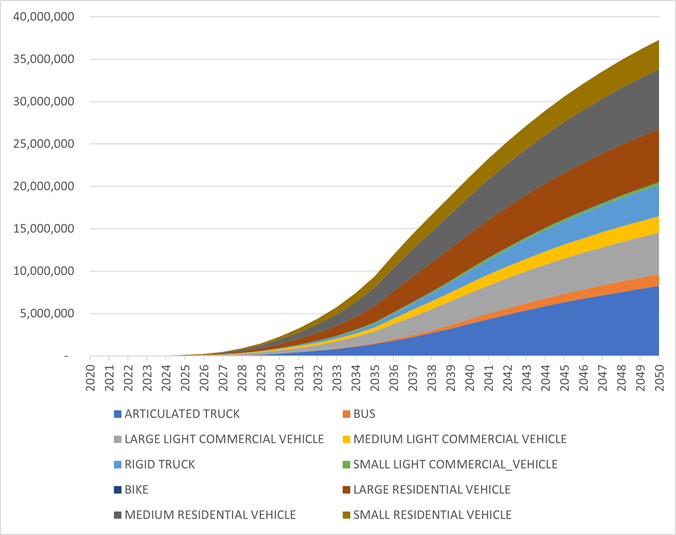 These seem like optimistic targets for Australia. EVs are expensive; about half of the EVs sold in Australia in 2020 were Teslas, which at the time cost from $73,000 to $144,000. Australia doesn’t offer the generous tax breaks and subsidies that other developed countries use to incentivise people to look at EVs as a truly competitive option to internal combustion driven vehicles.

According to CarsGuide.com.au, in a market that buys around one million new cars a year, approximately 20,000 EVs have been sold in Australia in the last decade. EVs accounted for just 0.7 per cent of the overall market in 2020 compared to 10 per cent in the EU and UK.

Sales of electric cars represented 4.6 per cent of total car sales around the world, and the availability of EV models expanded.

A key factor in their take-up is government policies to support the technology and according to the IEA for EVs to reach their full potential, “the 2020s will need to be the decade of mass adoption of electric light-duty vehicles” and specific policy support and model expansion for the medium- and heavy-duty vehicle segments will be crucial.[i]

The initial take-up of electric light-duty vehicles was supported by financial incentives via direct subsidies and/or vehicle purchase and registration tax rebates with Norway leading the way in the 1990s.

Further encouragement for the take up of EVs has come from the gradual tightening of fuel economy and exhaust (CO2) standards for conventional vehicles with the IEA estimating that more than 85 per cent of car sales worldwide are now subject to these kinds of standards.

Some jurisdictions, such as California and China, are employing mandatory targets for EV sales. More than 20 countries now have electrification targets (see figure 2) or internal combustion engine bans, while net zero emissions targets are also be expected to push increased electrification of vehicle fleets.

Aside from direct targets, overcoming issues like range anxiety remain important. Convenient and publicly accessible chargers are likely to be increasingly important to an increase in EV numbers. How this achieved and the role of government remains subject to debate. 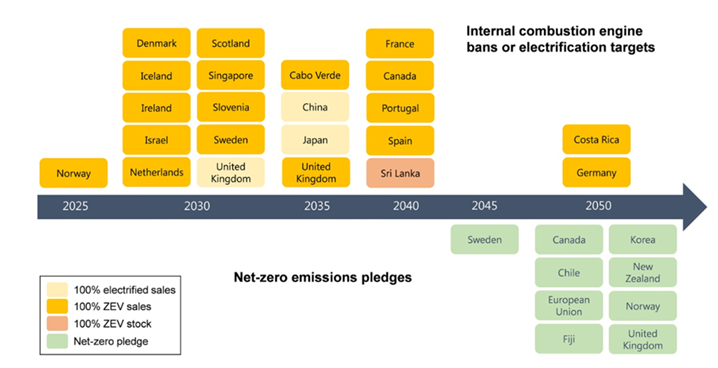 There are other disincentives to buying an EV too. Like this one.

In May this year the Victorian Government passed a law called the Zero and Low Emission Vehicle Distance-based Charge Bill 2021.

The Victorian Government expects it to raise about $30 million a year.

In an effort to stop the Bill prior to its rubber stamping in the ALP and Greens controlled Victorian Parliament, in open letter to Victorian MPs signed by 25 organisations which included the likes of Uber, Volkswagen as well as think tanks, and environment groups did not hold back in its assessment of the Victorian state government’s plans.

"Going it alone will mean Victoria has the worst electric vehicle policy in the world."

The letter said no other jurisdiction had introduced such a targeted tax on electric vehicles without significant incentives to balance it out.

"Every other state and territory in Australia has ruled out or delayed plans for a premature new tax on electric vehicles," the open letter said.

"This new tax means the world's manufacturers are far less likely to send Victorians their best, most affordable, zero-emissions vehicles."

Maybe the letter signatories hadn’t been paying attention to energy policy when they expressed their collected outrage over a state government going it alone on policy that should cut across borders? It would not have surprised many in the energy sector.

In February, the Federal Government released a long-anticipated discussion paper on electric vehicles.

To the disappointment of the EV manufacturers there was no discussion regarding financial assistance for motorists to purchase electric cars, targets for new electric car sales or minimum fuel emissions standards. There is hope in the sector though a final strategy to be released mid-year will include some of these.

The calls for subsidies are growing, most loudly from the global manufacturing giants who want government to stump up financial incentives for people to buy their electric vehicles.

"We're really not keeping up with the rest of the world. We are certainly viewed as laggards relative to other developed nations around the world," Mr Lester said.

"Those jurisdictions that do take a proactive approach with regard to EVs and incentivising the uptake are certainly going to get the lion's share of the volume."

The German auto-behemoth Volkswagen has also been a prominent critical voice of Australian policy towards EVs. Its GM in Australia explained to the ABC why the company is not importing its EV fleet into Australia.

"We are a Third World dumping ground in terms of automotive technology,” said Michael Bartsch.

But Volkswagen’s diesel scandal remains fresh in the minds of consumers and policy makers so many, including the Federal Energy Minister, think VW’s criticism is a bit rich.

In response to VW’s call for carbon targets Angus Taylor’s office told the ABC, "We will not be lectured about vehicle emissions by a car manufacturer that has a track record of deceiving motorists and violating clean-air laws."

To meet the targets envisioned by the IEA, Australia will need a major policy shift in a short period of time. In 1965 there was a shock which revolutionised the music world when Bob Dylan went electric, do we need to change our tune?