Down, down, are SA Prices down?

There have been reports that over the past few months that South Australia’s wholesale electricity prices have been below those in Victoria and NSW, a consequence of “steps taken by the Australian Energy Market Operator and the Weatherill government to ease the state’s energy reliability problems”[i].  Is this a reasonable assessment?  We take a look at the data.

Since March it is correct to say that South Australian prices have been reducing (see Figure 1).  October’s volume-weighted average monthly price was about 4.5 per cent lower than Victoria’s, the next closest mainland state – but this only shows part of the picture. 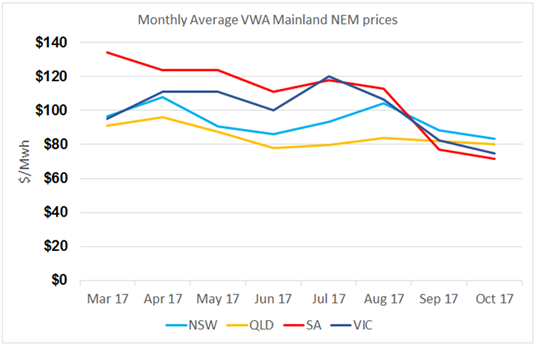 In fact, if this year’s March to October period is compared with the same period last year (Figure 2), SA prices are in fact higher than last year (after excluding the significant increases in June and July 2016 during the Heywood interconnector upgrade). 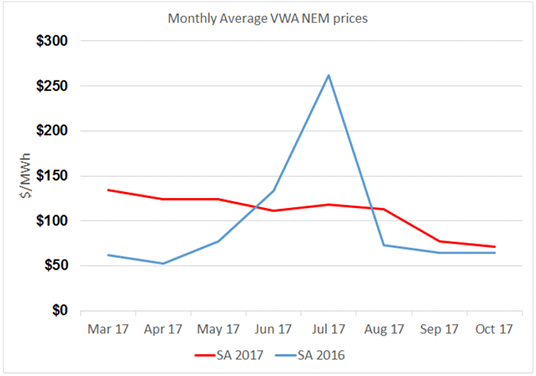 If a longer snapshot of SA’s prices over the past 22 months is considered (Figure 3), it can be seen that there is significant variation, which reflects the myriad variables which interact to determine market prices. 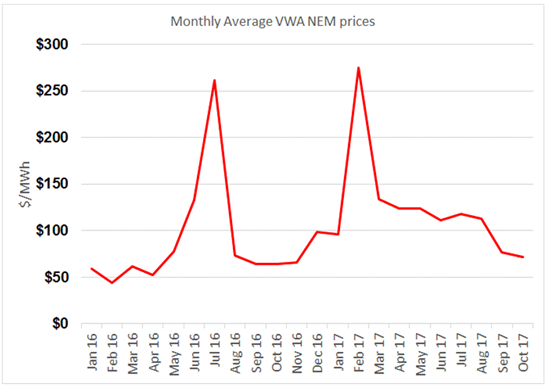 Spring is typically a period of low prices, as wind resources increase and demand reduces due to lower heating loads, so the prices shown in the charts are not unexpected.  In fact, the additional wind farm generation often leads to periods of excess generation when interconnectors reach their export limits, and as a consequence the South Australian prices fall below zero, and sometimes to the market floor price of minus $1,000 per MWh.  Whilst this does reduce the monthly average somewhat, it is not a healthy indicator, symptomatic of the volatility of the region.

During periods of very low prices, occurring when there is high wind output, thermal generation can’t recover its costs and understandably wishes to shut down.  Yet to maintain power system security AEMO needs certain services from these synchronous power stations, and AEMO directs thermal generation to continue operating.  Since March this year, AEMO has directed market participants to stay online 16 times.  AEMO compensates the directed generators and this has resulted in additional costs of more than $2 million being passed on to SA consumers.  (These costs are not part of the wholesale price and are not reflected in the graphs).

Of course excess wind is not always the case, and there is significant fluctuation between months.  Figure 4 shows the monthly wind farm capacity factors for SA wind farms, which shows wind output varies not only day by day, but also month by month.  The power system needs to adjust around these variations, and prices are one indicator of this. 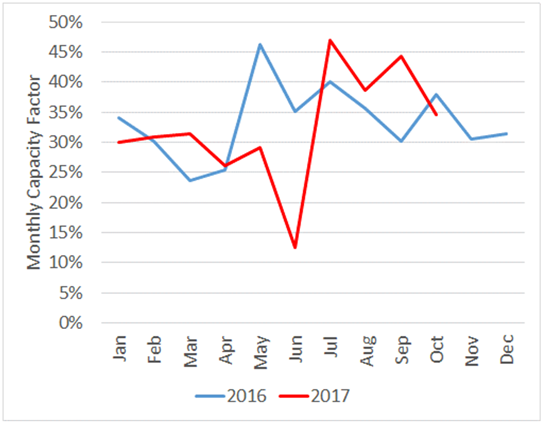 The news article suggested that “steps taken by the Australian Energy Market Operator and the Weatherill government to ease the state’s energy reliability problems” have reduced prices in SA.

According to the SA Government’s Our Energy Plan[ii], the projects are:

While these plans are currently being implemented, apart from a minor 561MWh generated by the diesel-fired generators while testing, all of these measures are yet to operate, and so cannot be linked to recent price outcomes.  Nor do they seem to be affecting the market’s view of the future as seen in the contract market.  Figure 5 is a graph of SA Q1 2018 $300 cap prices, which shows that prices are rising as summer draws closer. 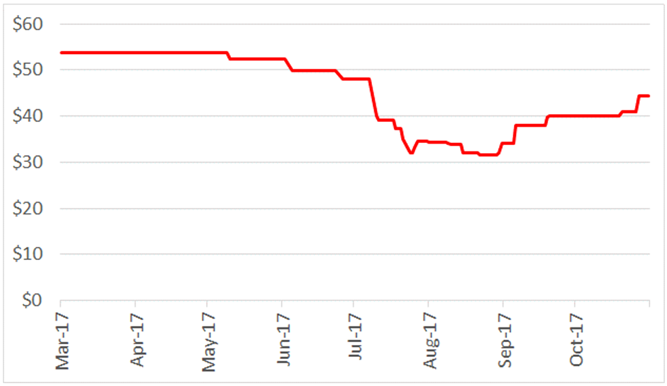 Furthermore, these cap prices, as shown in Figure 6, remain higher than the other mainland National Electricity Market (NEM) states, putting paid to the misapprehension that SA prices are cheaper than other states.  This relationship, in which SA exhibits prices higher than the other mainland NEM states, holds true for other derivative products as well. 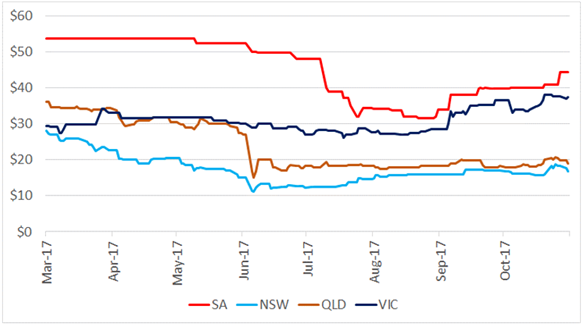 There is no indication in the data that SA’s prices have declined for any reason other than natural variability, heavily influenced by seasonal conditions, and the contract data suggests that there is no change to the outlook that SA is likely to remain the region with the highest prices on average.

Victoria's Energy Fairness Plan was introduced via press release just days before the 2018 state election. While the Plan was an election commitment, the Victorian Government has not made the case for the alleged benefit the parcel of these reforms will bring energy consumers.

Following a fire at Callide C Power station on Tuesday 25 May, a series of events resulted in multiple generators disconnecting and 2,300MW of demand being interrupted. This was the most severe event in the NEM since SA's black system of 2016. Like all serious power system incidents, there was a complex chain of issues that will take some time to unpick.

South Australia could borrow a slogan from another state based on recent vagaries and challenges thrown up by its energy grid. One day it experienced spot prices exceeding $5000/MWh six times between 6pm and midnight and two days later it was reporting near-record minimum demand, which required the step of curtailing rooftop solar to ensure grid stability.

May 20 2021
Read Analysis
GET IN TOUCH
Do you have a question or comment for AEC?