At a time when the media and industry reports are questioning whether Australia’s retail energy markets are sufficiently competitive and are beneficial to consumers, the Australian Energy Market Commission’s (AEMC) 2016 Retail Competition Review Report has given the thumbs up to the effectiveness of competition in the deregulated markets. According to the AEMC customers typically saved between $140-$380 when switching from an electricity standing or default offer to a competitive market offer. Furthermore, the recent Energy Consumers Australia (ECA) Energy Consumer Sentiment Survey Report found that consumers in deregulated markets were also much more satisfied with the level of competition in the energy market.

What is the point of competition?

Retailers are selling a product that is, on the face of it, homogenous, and whose physical delivery is carried out by another party (the network operator). However, the customer proposition for electricity is different from many other goods and services. Subject to the physical constraints of their connection, customers can consume as much as they like, when they like. So the retailer has an important role in procuring electricity efficiently for customers who do not have to pre-determine their consumption patterns. Crucially, competitive retail markets support effective competitive wholesale markets, as each retailer needs to get the best deal they can and choose the best procurement strategies (a combination of own generation, long term contracting, shorter-term contracting and trading, demand response, customers’ own distributed energy resources and potentially some spot market exposure) to ensure it is not higher-cost than its rivals. This puts more effective competitive pressure on wholesale suppliers than if retailers could pass through wholesale costs because they had no competitors.

Thanks to government policy, retailers must also competitively procure large and small renewable energy certificates and in some cases energy efficiency activities. Again the competitive pressure to manage costs means that these policy goals are delivered more efficiently than if there was a single central procurer (eg the government) of these. Retailer must also manage billing and customer queries as well as debt management for customers struggling to pay. Recently, the procurement of metering services has been added to this list.

One area where retail competition has had less impact is on network costs as these are regulated monopolies. Their revenue is determined by the Australian Energy Regulator (AER) and tariffs must be offered on an equal access basis. The advent of competitive metering and the availability of digital meters allow for more cost reflective network tariffs to be offered by the networks and retail competition will be an important driver in uncovering those which are best for consumers’ needs.

Competition is also about choice, and this manifests in a diversity of retail offers with: differences in the fixed versus variable mix; payment options; special discounts such as the “hour of power”[i] and free Saturdays[ii], partner offers such as cinema tickets[iii] and discounted footy memberships[iv], different levels of access to usage information, tariffs or retailers that are presented as “environmentally friendly” and so on. Competition is further enhanced by the emergence of new energy services such as rooftop PV and battery storage. While these are often offered by parties other than traditional retailers, many retailers do participate in these markets.

According to the AEMC, customers who shop around in deregulated markets can make substantial savings on their electricity bill. Figure 1 outlines the savings customers made by simply comparing offers and switching to a better offer.

Figure 1: Typical savings customers made switching from an electricity standing or default offer to a competitive market offer annual savings[vi] 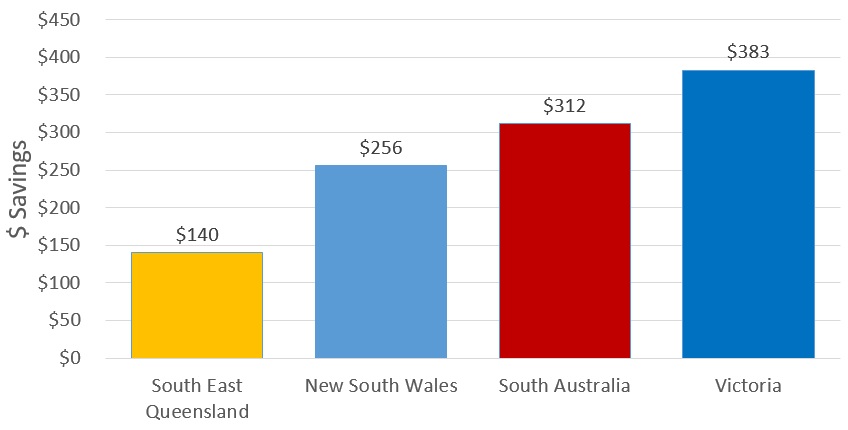 It is therefore no surprise that in the recent Energy Consumers Australia (ECA) Energy Consumer Sentiment Survey report[vii], states where prices are deregulated also contain consumers who are much more likely to be satisfied with the level of competition in energy markets.

Across Victoria, South Australian and New South Wales around half of consumers were satisfied with the level of competition. Customers in these states were also likely to say the market is working in their interests and/or that it could provide value for money in the long term. Figure 2 shows the consumer survey’s findings.

Figure 2: How satisfied are you with the level of competition in the energy market in your area? 0-10 scale, 0 = ‘not at all satisfied’, 10 = ‘very satisfied’

The AEMC identified four electricity retailers, and three gas retail businesses in the ACT and found that competition was not effective in this market, which still has regulated gas and electricity prices. This contributed to households in the ACT being the second least satisfied with the levels of competition in their jurisdiction (23 per cent) only behind Tasmania.

In principle, competition can occur under a price cap, as long as it is sufficiently "loose". In practice it is impossible to know that this is the case. Price caps are set on a forward looking basis and so do not take account of how costs may change during a period. They are typically based on building up a "cost stack" of the different components for a "typical" customer. The problem is that apart from the regulated network tariff component, the costs aren't known, they can only be estimated, and not all customers are "typical". The same problems face any independent analysis of retail margins. Accordingly, such analyses cannot be considered definitive. The impact of price caps in Australia can be seen in the lack of retail competition for households in areas such as the ACT and Tasmania.

Even after price caps are removed, retailers often face a myriad of regulations that, whatever their underlying rationale, can collectively act to inhibit competition. This may be through creating  barriers to entry for new retailers or by inhibiting or outright banning innovative service offerings that customers may value.

The U.K. provides a good example of the challenges of "regulating for competition". Attempts there to encourage more customers to actively engage in shopping around by sharply reducing the number of offers each retailer could make and constraining the shape of the tariff resulted in retail margins actually increasing. Additionally some customers lost access to specific tariffs that suited their circumstances[viii].

Effective competition requires both sellers to actively seek out customers and consumers to seek out offers. Retailers have a variety of marketing channels to both existing and potential customers. These include various forms of direct marketing and partnerships with other organisations, such as One Big Switch, price comparison websites and activist groups such as GetUp! which is paid commission for using its campaigns to encourage customers to switch to their preferred supplier[ix]. When you alternatively compare a person’s day wage to cover the cost of an average day’s electricity consumption, Australia is lower than the UK and among the lowest in the world. The Organisation for Economic Co-operation and Development (OECD) figure which uses average annual wages in US dollars (on a PPP basis) to calculate an affordability rate for electricity shows that Australians use only 2.27 per cent of their daily wages to meet their power bills with the average daily income calculated at US$140.13. This is amongst the best affordability ratings when compared to the other 29 countries shown.

Figure 3: Portion of a day's wages needed to buy the average day of electricity usage[x]

[viii] Littlechild, S, 2015, “Regulation of retail energy markets in the UK and Australia” for the Energy Supply Association of Australia

Energy retailers: What do consumers think?

The latest assessment of consumer sentiment shows record levels of satisfaction with energy retailers and a “growing belief that consumers are getting better value for money”. The data released by Energy Consumers Australia shows a steady improvement in the satisfaction trendline since December 2017.

Jun 03 2021
Read Analysis
GET IN TOUCH
Do you have a question or comment for AEC?