Cost of coal: “Most important, but overlooked” factor in power prices

Two reports landed this week that provide some good insight into the state of coal-fired and renewable generation in the National Electricity Market (NEM).

The reports from BloombergNEF (BNEF) and EnergyQuest offer insight into the factors at work.

BNEF’s report, 2H Australia Power Market Outlook, shows that the cost of coal power generation in the NEM has doubled from 2016 levels, in line with seaborne thermal coal prices.

BNEF notes that with black coal accounting for around 54 per cent of the NEM’s generation mix (compared to 51 per cent in 2016) the increase in the cost of coal generation “is one of the most important, yet overlooked, factors driving up power prices”.

Black coal generation is producing more power following the closure of several brown coal plants, including Hazelwood in Victoria and Northern in South Australia, which has forced operators to source more fuel at spot market prices that have risen.

According to BNEF’s lead author Ali Asghar the result is that they have to charge more for their power and thousands of megawatts of coal capacity that had been offered at $20-40 per megawatt hour (MWh) during most of 2016 was now available at $40-60/MWh, which is shown in Figure 1 below. 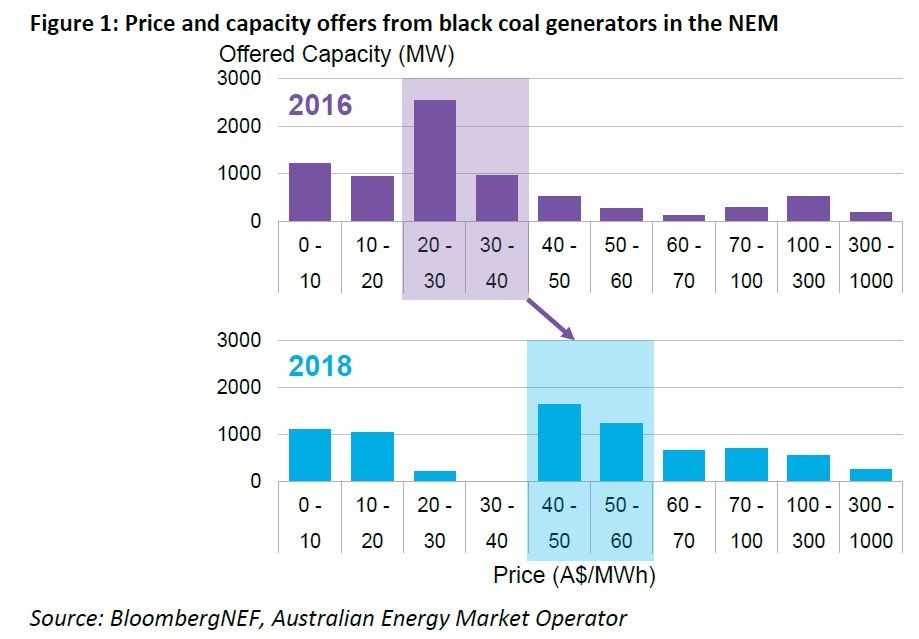 With black coal-based generation making up a large proportion of the NEM’s energy mix it is often setting the average base for power prices in the NEM. The increase in generation from coal is the major factor behind the 60-100 per cent increase in average wholesale power prices over the past two years, according to BNEF.

A key factor in the higher coal price is the demand for Australian coal in Asia. BNEF reports that depending on the grade seaborne thermal coal prices have gone from A$55-75 per metric ton in early 2016 to A$90-160/ton in August this year (that can be seen in figure 2 below). 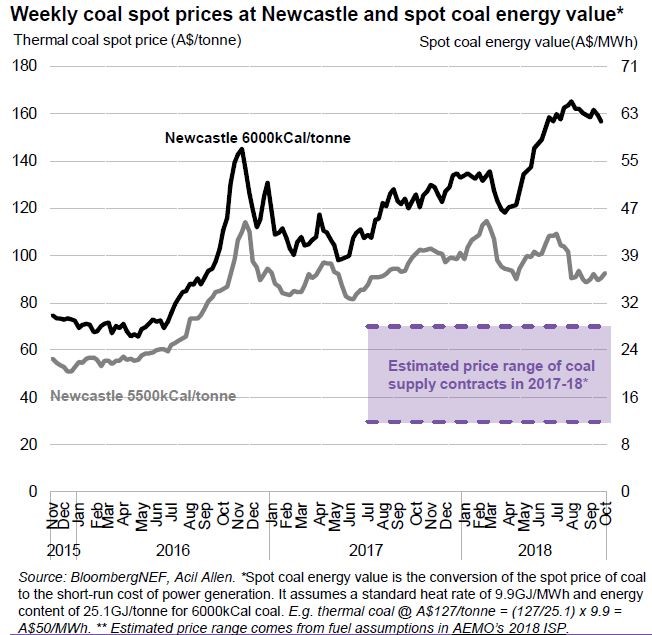 Thermal coal prices at the Newcastle hub have been steadily rising over the past three years. BNEF points to increased international coal prices having a knock-on effect in the NEM.

This can result from most coal generators without a “captive” source of supply potentially being partially exposed to the coal spot market. While most feedstock is through long-term supply contracts, occasional spot purchases may be need for marginal generation.

With the closure of coal power plants like Hazelwood and Northern there has been increased generation from the remaining fleet “requiring coal consumption above their contract supply”. The extra coal supply is linked to the spot price.

BNEF’s report comments that coal-fired power stations’ price setting bids have increased by 50-150 per cent this year relative to 2016, which is in line with the changing prices for export grade black coal at the Newcastle hub over the past two years. It is most notable for rail-linked plants which are more exposed to export markets, while mine-mouth plants continue to dispatch at low <a$20 mwh=""></a$20>

This is in fact exactly how the NEM, or any other commodity market for that matter, is supposed to work. Competing producers change their prices in line with their marginal costs. In the case of those generators using export linked black coal, they are “price makers”, and are rationally reflecting these higher costs into the sale prices of their products. The mine-mouth generators in this case are “price-takers”, and, as with price takers in other commodities, during these times of higher prices they are naturally more profitable than at other times. If this is sustained, it should encourage new investment.

BNEF argues that the silver lining is the increased competitiveness of solar and wind and its model shows that the levelised cost of electricity (LCOE) of new wind and solar PV plants in some cases is now lower than the current short-run marginal cost of thermal coal bought on the spot market (see figure 2). This comparison of course doesn’t consider the variable nature of these sources which tend to earn less in the market over time – another intended NEM outcome. Nevertheless, the implication is that the owner of this sort of black coal might wish to retain its capacity for “firming” purposes, whilst considering installing solar and wind as an alternative to buying expensive marginal coal.

Figure 3: Short-run cost of coal versus levelised cost of electricity of wind and solar 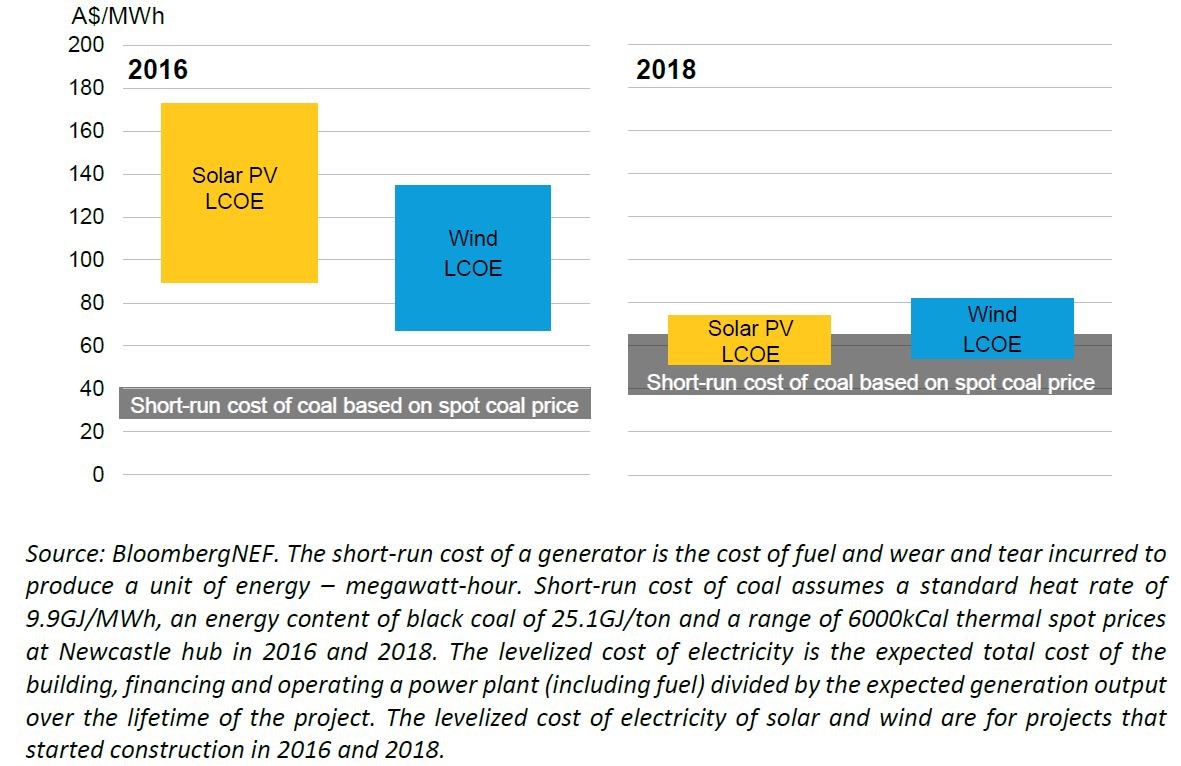 The third quarter saw record use of solar (up 38.3 per cent) and wind (up 16 per cent) for electricity generation, while hydro power was at its highest level in more than five years. Renewables, excluding hydro, increased 23 per cent quarter-on-quarter and made up 13.2 per cent of NEM output. 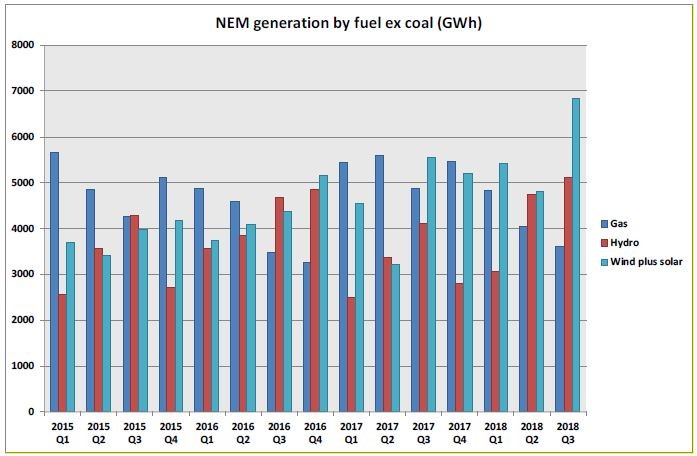 Source: AEMO, Department of the Environment and Energy, EnergyQuest, 2018

The two reports highlight that ongoing dominance of coal in the NEM. BNEF’s highlighting of coal costs reinforces the issue flagged in the Australian Energy Regulator’s December 2017 assessment of NSW wholesale prices[i] with coal costs and their impact on the costs of generators who purchased coal under short-term contracts highlighted.

Greenwashing: Don’t get taken to the cleaners

As the world transitions to a cleaner energy future, many high-profile companies have pledged to reduce their emissions and align themselves with a net-zero future. Making a pledge is not the same as meeting a pledge, and this can give rise to claims of greenwashing. What does the law say about greenwashing? And what does it mean for the energy transition?

Putting some momentum in inertia

The AEC has published a new report by MarketWise Solutions on the introduction of an Inertia Market into the NEM. For some time industry has been aware of the need for a mechanism to recruit inertia to support the NEM as it transitions. We look at what it is, it’s challenges, and four different approaches on how this missing market could be filled.

The challenge posed by falling minimum demand was again in the spotlight with the release of AEMO's latest supply assessment. The 2021 Electricity Statement of Opportunities highlights the major impact the increasing amount of distributed PV is having on managing the grid.

Sep 02 2021
Read Analysis
GET IN TOUCH
Do you have a question or comment for AEC?