The Australian Energy Market Operator’s (AEMO) recently appointed Chief Executive Officer, Daniel Westerman, received some headlines last week when he flagged the market operator’s goal of delivering a capability for the grid to manage 100 per cent renewables at any moment by 2025.  The announcement was generally well-received although, unfortunately, initially misreported as targeting the running of the National Electricity Market (NEM) entirely on renewables by 2025.

Industry participants may well ask themselves why AEMO would be indicating a 100 per cent renewables capability by 2025 as a goal? After all, AEMO does not determine investment in generation in the market, however its intentions do send signals to would-be investors about what opportunities (and challenges) may lie ahead.

Which is not to say that progress towards a lower emissions market isn’t welcome. The Australian Energy Council has endorsed the goal of net zero emissions by 2050 and in the meantime aims to promote sensible policy to help guide Australia’s electricity system to a lower emissions future.   As a representative body for generators of all kinds – renewables, hydro, coal, and gas - the AEC approach is technology neutral when considering energy market reforms and their likely impact.

What is ‘sensible policy’? From the AEC’s perspective, this means policy that balances the community’s expectation of climate change action with its equally important expectation of not paying excessive amounts of money for their electricity.  In this way, the AEC’s goals mirror those outlined in the National Electricity Objective, which guides the work of the market operator.

So, in principle, AEMO’s goal to prepare the grid for increasing volumes of renewable generation is wise, and we can all agree that the market operator should prepare the grid for the decarbonised future we are all working towards.  But to achieve 100 per cent capability by 2025 is, as noted by AEMO, ‘uncharted territory’.

The 2025 goal for 100 per cent renewables capability in the NEM is an acceleration of the central scenario in AEMO's Renewables Integration Study (RIS), which was only released in April 2020.  That report found that based on a central scenario the grid could ’potentially’ be able to accommodate 75 per cent instantaneous renewables at times subject to ‘recommended actions’ being taken. It anticipated that the NEM would only be able to handle a maximum instantaneous penetration of wind and solar of between 50 per cent and 60 per cent by 2025 if those actions were not taken.  Beyond 2025, the report stated that AEMO had not identified any insurmountable reasons why the NEM cannot operate securely at even higher levels of instantaneous wind and solar penetration, especially with ongoing technological advancement worldwide.

This Stage 1 report also noted its limitations and is clear that it did not seek to investigate the costs of proposed actions or mechanisms.  It was an analysis of technical system security limitations.  Apart from careful technical analysis it will also require cost benefit analysis to accurately understand the potential impact on customers and expected market benefits. This would ensure activities are consistent with the National Electricity Objective (NEO) to "promote efficient investment in, and efficient operation and use of, electricity services for the long-term interest of consumers of electricity with respect to price, quality, safety and reliability..."

The market operator has indicated that costs would be considered as part of its Integrated System Plan (ISP) and other mechanisms such as the Energy Security Board and Australian Energy Market Commission reform processes.

Since the release of the RIS there have been further developments, such as NSW’s Electricity Infrastructure Roadmap, which will drive further investment in renewables. The market operator has completed consultation on the next ISP’s methodology and inputs, assumptions and scenarios and expects to publish reports on these by the end of this month, which will inform modelling on the ISP 2022.

Perhaps the ISP will provide some better clarity on costs, but it is undoubtedly an important part of understanding the market benefits or otherwise.  It is an unfortunate fact of life that energy policy has become increasingly ideological - there is no middle ground - and when debating these issues you’re either seen as ‘for renewables’ or ‘for the big emitters’. It would be preferable if we could all be ‘for customers’ and focus more on the issue of cost and necessity. The reality is that more renewables will come into the grid, but our system is still heavily dependent on coal-based generation (around 64 per cent). The step change scenario in AEMO’s ISP 2020, which would see a more rapid shift to renewables, highlighted its expectations of retirements of thermal generation as shown below. 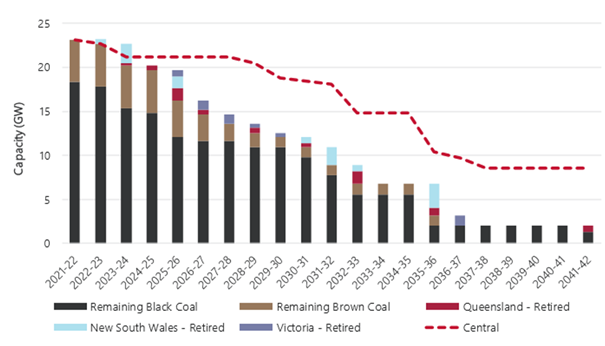 We are moving away from coal plants, and it is difficult to imagine the business case to build new ones in the current climate. That’s ok – it’s always been expected that these plants will be replaced by renewables, supported by batteries and hydro and probably some gas plants as well as they come to the end of their operational life. The risk in changing the operating dynamics for these plants in a very short timeframe is that they may be forced out earlier than their lifespan would suggest. Coal plants were not designed to quickly ramp up or down which is what a grid that can accommodate 100 per cent renewables at times will demand. The disorderly exit of dispatchable generation from the NEM in this way would not assist either the market or the consumer.

There is a lot of reform happening in the NEM at the moment. The Energy Security Board is working on recommendations for market design that will support the post-2025 grid at the same time as its participant jurisdictions are intervening in the market with policy and investment likely to create more uncertainty for private investors and potentially oversupply the market.

Coordination will be critical to managing the delicate requirements of our electricity system. Uncoordinated investment risks an overbuilt and very fragile system which must be paid for, with consumers and/or taxpayers ultimately footing the bill.

What the market operator has done is flag the serious and rapidly looming challenge of our changing power system. What we now need to do is ensure measures to accommodate more renewables on the grid dovetail with the proposals and reforms from bodies like the Energy Security Board and Australian Energy Market Commission. Operational solutions will need to fit within the context of this wider reform work.

That is why we will continue to advocate for sensible, detailed, cost-benefit analysis of where and when new generation is needed.  And the timeframe for its delivery should be considered against that objective consideration so that customers are not left short-changed.