There have recently been media reports that accuse the electricity retail sector of market gouging in the South Australian energy sector, which resulted in high spot prices in July 2016.[1] However, the findings from the Australian Energy Regulator’s (AER) report[2] on electricity spot prices has a different story to tell.

AER’s ‘Electricity spot prices above $5000/MWh South Australia’ report found that elevated electricity costs on this day were caused by South Australia’s reliance on wind and gas-generated power, coupled with planned outages to upgrade the Heywood Interconnector to Victoria.[5]

The AER report explains that the closure of the coal-fired Northern Power station in May 2016 has increased South Australia’s reliance on gas and intermittently available wind. The available capacity from thermal generators during the first weeks of July remained relatively consistent. However, on this particular day, gas-fired generators were faced with limited gas and transport capacity that resulted in the scheduling of the limited fuel being problematic. This was in addition to planned outages at Pelican Point power station and at Torrens Island B3 unit power station.[6]

Given this uncertainty, the constrained generators were careful not to commit plant too far in advance, and therefore adjusted output as market outcomes became more certain. 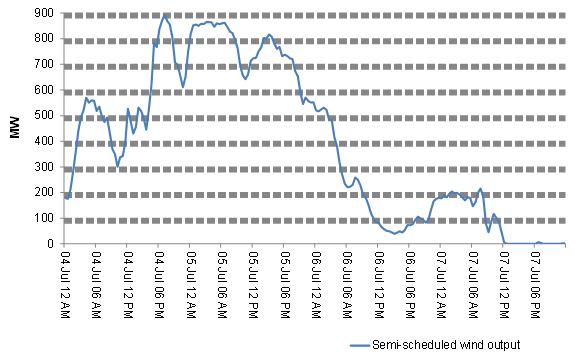 The combined effect of low wind availability and the limited capacity from thermal generators affected electricity prices on the day. Figure 3 clearly shows the installed generation capacity in South Australia versus the actual availability on the day. The red line (at around 4100 MW) shows the total scheduled and semi-scheduled generation capacity installed in South Australia. The purple line shows that slightly less than 2500 MW was available after the removal of Pelican Point power plant, and this descends another 200 MW after Torrens Island B3 unit is removed. Torrens Island A1 was also not offered into the market until 4pm. The figure demonstrates South Australia’s large dependency on gas and wind for its electricity supply.

AEMO also released a report[12] on South Australian spot market volatility which supports the AER’s findings. The AEMO report states that the high electricity spot prices in July was a result of a number of factors including; 'high wind variability and low solar production, planned transmission outage impacting interconnector flows between Victoria and South Australia, availability of thermal generating units and cold weather', which increased gas and electricity demand that resulted in higher than average gas and diesel prices.[13] Figure 4 shows the variety of events that contributed to high spot prices.

These reports clearly demonstrate that the high spikes in South Australian electricity prices were structural, and not a result of market gouging. The AER noted that there was no significant rebidding of capacity from low to high prices that contributed to the high priced outcomes.[14] In fact, in response to actual high prices, participants were prompted to rebid capacity from high to low prices, demonstrating that competition between available generators was working as intended.

Furthermore, a Frontier Economics report for AEMO[15], released in April 2015, forecasted that high price spikes would be linked to days of low wind production and that an increase of intermittent renewable generation would lead to greater volatility on wholesale electricity prices.

The AER report found that energy demand had been constant several days prior to the price spike and that average demand levels were similar to last winter. The lack of wind generation and the interconnector shutdown was the primary cause of limited energy availability.[16]

These findings dispel the claims of abuse of market power, lack of competition or gaming of the electricity system to obtain high spot prices.

Given the South Australian Government’s commitment to sourcing 25 per cent of its electricity from dispatchable renewable energy providers, which was announced in July this year, the government is now searching for options to mitigate spot market volatility.

The South Australian Government has already undertaken measures to drive down spot prices in the short term by persuading Engie to restart the Pelican Point power station.

On September 8, the South Australian Government announced medium term measures to address the power shortages and to drive down high energy prices through increasing energy market competition.[17] This includes a plan to procure 75 per cent of its long-term electricity needs designed to introduce a new competitor in the market. The South Australian Government will also provide $24 million to incentivise further gas supply in South Australia, and is supportive of a national market-based emissions reduction scheme.[18]

The South Australian Government is right to recognise the importance of locally based dispatchable firm generation being available to support the security of the power system. Greater firm dispatchable generation within South Australia will increase its capacity to manage upcoming heat waves and cold snaps. Such generation also has the capability to provide ancillary services including frequency control, inertia and potentially system restart, all of which are critical services to maintain power supply security.

In particular, gas will play an important part in the energy mix especially as a transitional form of energy generation as Australia transitions to reduce its carbon emissions. Gas will support renewables by providing flexible dispatchable power to stabilise the electricity system as the uptake of renewables technologies increases.

While is it important to investigate the option of a new interconnector, it is unclear if a new interconnector will alleviate South Australia’s power security challenges over the long term. While the point of the regulatory investment test for transmission, is to determine if an interconnector is a credible option that maximises the present value of net economic benefit to all those who produce, consume and transport electricity in the market, there is a lot to consider in evaluating the net benefits. The benefits of an interconnector into South Australia are largely based on there being low cost, dispatchable power from neighbouring Victoria and NSW, i.e. coal-fired plant. As Australia transitions to a decarbonised economy and as Victoria, in particular, chases a 40 per cent renewable target by 2025, these coal-fired generations plants will exit the market. However, consumers will continue paying for a regulated interconnector regardless of whether it is still delivering value.

The South Australian Government’s decision to support additional local dispatchable electricity generation to help manage the state's supply challenge appears to be a step towards more firm generation in South Australia. Longer term, the State requires a plan to manage the implication of its large volume of intermittent generation.