Today the Australian Energy Market Commission (AEMC) published its draft determination on a Wholesale Demand Response Mechanism (DRM). The concept first emerged in the AEMC’s ground-breaking Power of Choice (PoC) Review in 2011, and was subsequently developed, assessed, rejected, re-emerged and is now on the verge of being imposed on the market. We take a look at what all the fuss is about that has kept it in, and out, and back, in play for so long.

Demand Response (DR) is an excellent resource for power systems such as those in Southern Australia subject to extreme “needle-peak” heat waves and variable supply sources. It can provide capacity at very low capital cost compared to generation, although it usually has a very high operating cost and complex managerial challenges.

In the NEM, each customer has one “Financially Responsible Market Participant”, which we call a retailer. They take on all the market settlement responsibilities for that customer.

In this construct, the financial benefit of demand-response is simple and obvious. If the customer reduces consumption, the retailer will have to pay less to AEMO, but will also receive less from the customer. Whenever the wholesale spot price exceeds the customer’s retail tariff, there is a benefit to the retailer in encouraging the customer to consume less. Of course, the customer would presumably be doing something useful with the electricity, so it would need to be a very high margin (i.e. a time of high spot price) to compensate for the inconvenience.

Importantly, this incentive is unaffected by the Retailer’s broader business. Irrespective of whether the Retailer has contracts with, or directly owns a generator, the retailer will improve its financial position by activating the DR. Even if the retailer already has a “long” position, i.e. is receiving more from its generators and contracts than it is paying out for its customers, activating DR from one of its customers will make it even longer. This means, at the margin, when prices are high, exercising DR is always beneficial for the retailer no matter what’s going on in the rest of its business.

So retailers look to exploit such opportunities with their customers, and, in order to compensate for the inconvenience, provide various incentives to the customers who do respond. Sometimes retailers engage a third-party expert to investigate and setup ways to maximize the response from customers. This we call a “Demand Response Service Provider” (DRSP). They will earn a fee, but they won’t be involved in the actual market settlement.

Customers, being rightly focused on matters other than electricity, don’t always respond in exactly the way anticipated. Unlike generators, customers are not slaves. And, if the DR turns out to be less than expected it remains a matter for discussion and resolution between the retailer and the customer – no other party is affected.

So what’s the problem?

The NEM is often criticized for failing to fully exploit DR potential. But this claim can never be fully quantified, because:

Nevertheless, critics of the current arrangements remain unconvinced that retailers are fully exploiting their customers’ DR capabilities. They argue:

There was also another, more valid, concern expressed at the PoC review that if the DR requires a significant set up, it may not be worth it if the retailer’s customer contract is short. For that reason the AEC proposed a rule change to install a DR register to allow DR arrangements to survive a change of retailer. The draft determination has instead chosen a less minimalist path.

Those who consider the retailer to be an obstacle have continued to advocate a scheme, adopted from the US, where DRSPs activate DR during high prices and receive the benefit of doing so from AEMO. Meanwhile retailers have to keep paying AEMO as if the DR never happened.

The following diagram represents the financial flows with some indicative amounts.

This proposal has proven highly controversial to the industry for two main reasons:

When the DRM was studied from 2012-2015, it was ultimately rejected for the above reasons. However it never quite died. In 2017 the Finkel Review recommended[iii] its re-investigation, followed by the AEMC Reliability Frameworks Review[iv] and ACCC Retail Electricity Price Investigation of 2018[v].

The scene was set and a coalition of parties re-submitted the proposal in late 2018 as a rule change[vi]. These parties have kept the pressure on, with media coverage on an otherwise complex and arcane matter. Media stories have tended to present a “David vs Goliath” narrative[vii].

Today’s decision went against the industry’s preference in recommending that the DRM progress. The AEMC undertook consultation, including a technical working group that explored three rule changes at once. Importantly it has proposed some significant implementation features. These are: 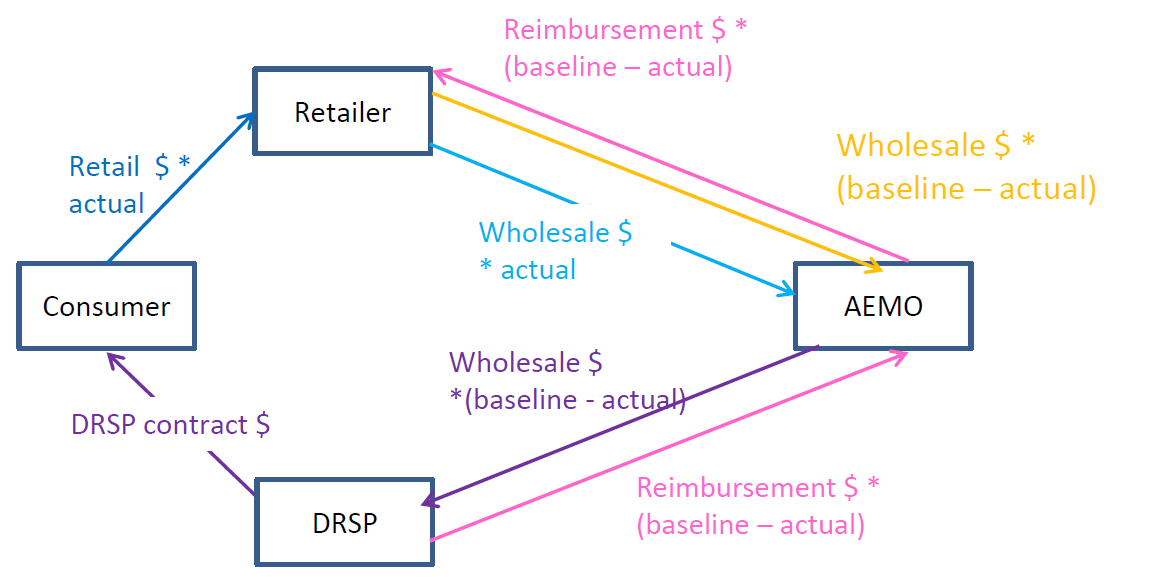 The significant change in the proposed design are in three new arrows above:

This “reimbursement” price cannot be the actual retail tariff, as that is confidential and if used would be revealed to many parties. Instead the AEMC is suggesting it be an indicative current price for the wholesale component of retail tariffs, set by the AER. So, it’s a valiant attempt, but even after a lot of work by the AER and presumably contested argument with industry, it will never be exactly the tariff needed to make the retailer whole.

Given the pressure from many sides, it is perhaps not surprising that the AEMC was minded to make the draft rule. However they have also realised the significant implementation challenges and have attempted to ameliorate this with the implementation features described above.

The reimbursement arrangement certainly adds complexity to an already complex settlement arrangement. Yet, in proposing it, the AEMC may well be correct; that it could actually lower implementation costs for retailers and the proposal thereby be improved by it.

However unpacking such complexity reveals the trouble with the overall DRM concept. Whilst supportive parties such as Finkel and the ACCC rightfully wish to support DR, it is unclear whether they have fully grasped just how complex and unintuitive the DRM concept is, or whether they have been influenced by the “David vs Goliath” narrative run by its supporters.

[ii] AEC, Electricity baseliners: Not as accurate as a Barty forehand, 27 June 2019

[iii] Commonwealth of Australia, Independent Review into the Future Security of the National Electricity Market, June 2017

Following a fire at Callide C Power station on Tuesday 25 May, a series of events resulted in multiple generators disconnecting and 2,300MW of demand being interrupted. This was the most severe event in the NEM since SA's black system of 2016. Like all serious power system incidents, there was a complex chain of issues that will take some time to unpick.

South Australia could borrow a slogan from another state based on recent vagaries and challenges thrown up by its energy grid. One day it experienced spot prices exceeding $5000/MWh six times between 6pm and midnight and two days later it was reporting near-record minimum demand, which required the step of curtailing rooftop solar to ensure grid stability.

May 20 2021
Read Analysis
GET IN TOUCH
Do you have a question or comment for AEC?