Electricity baseliners: Not as accurate as a Barty forehand

Demand response is attracting increased attention as a contributor to the power system and as a way by which electricity users of all sizes can participate in the wholesale electricity market.

The catalyst for reconsideration of demand response (DR) was the release of the final report of the Australian Energy Market Commission’s (AEMC) Reliability frameworks review [i]. That report included the following recommendations to increase the scope for demand response:

Under current arrangements all wholesale energy is settled with AEMO by the retailer. This means that if a customer can reduce their load at a time of high wholesale prices, the retailer’s costs reduce. The current construct assumes the retailer will find a way to share the benefits with customers. This occurs through four main approaches:

Subsequent to the AEMC’s reliability review three separate rule changes were put forward and are now being considered each with varying levels of ambition and additional costs and complexity. These changes seek to introduce:

A wholesale demand response register – this has been proposed by the Australian Energy Council and is the most minimalist of the three proposals, having no impact on settlement systems and therefore only very minor costs. It creates a framework where parties can negotiate agreements to facilitate DR. It would create a new category of market participant – the Demand Response Aggregator (DRA) which would apply to the parties that control demand response and behind-the-meter generation at a connection point. Settlement of the actual load would however still occur via the retailer, however  the DRA activities could, if desired, be registered, and if the customer changes retailers, there would be a requirement for the new retailer to seek to continue the DRA arrangements.

A wholesale demand response mechanism – this is a joint proposal from the Public Interest Advocacy Centre, Total Environment Centre and the Australia Institute and is largely a repetition of a scheme that was previously considered and ultimately rejected by the AEMC in 2016[ii]. This would create a new category of market participant, called the demand response service provider (DRSP) and involve transferring the value of wholesale DR from the existing retailer to a DRSP, who might be the customer or a third party service provider used by the customer.  The proponents argue that there are commercial barriers to developing the required partnerships between retailers and demand response providers.

Under this mechanism retailers would not be able to opt out and would be required to change their billing and settlement systems to accommodate bills on baseline energy use. The retailer would be settled on the customers’ baseline level of consumption, while the DRSP would earn the spot price for the difference between the baseline and the customers’ actual consumption.  They would then pay customers for their demand reduction, based on whatever commercial arrangements they’d struck.

A separate wholesale demand response market – the creation of an additional market has been proposed by the South Australian Government specifically for demand response and operated outside the wholesale market by AEMO. Retailers would continue to be settled on customers’ actual consumption under the existing spot market, but the additional market would require baselines for customers to be set, and payments made based on demand response provided.  Retailers would bear the costs of the new market, and these would be passed on to customers.

While the attraction of DR is obvious, measurement is considerably more complex because it seeks to quantify the absence of electricity consumption, rather than reading how much was actually consumed.  Measuring an absence is, by its nature, complicated, and using assumed quantities such as baseline volumes exposes parties all the way along the supply and settlement chain to risks of inaccuracies, inappropriate treatment of quantities, and possible gaming. You are trying to measure how much was not used at a particular time rather than what was used.

If a baseline is set too high, customers will receive a benefit to which they would not otherwise be entitled and, if the retailer is settled on the baseline, it will be paying more than it should for the customer’s expected consumption.

If the baseline is set too low, there will be little benefit to the customer from reducing its consumption, and the retailer will obtain minimal benefit from the value of demand response in its portfolio as well. 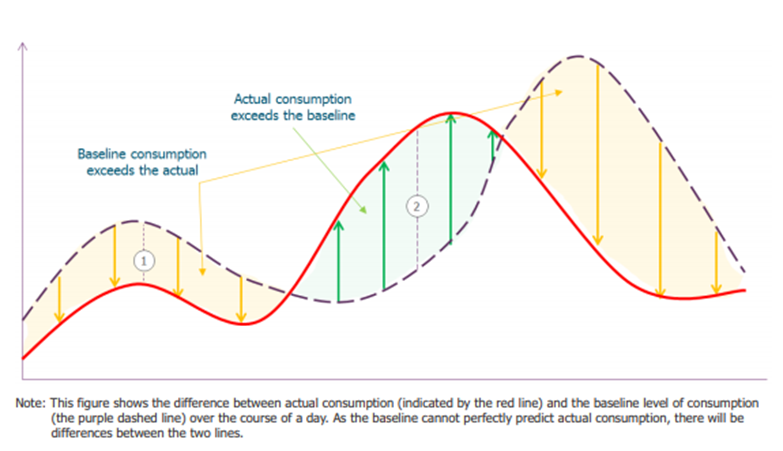 Different approaches to baselines are:

Setting or managing them centrally. According to AEMC’s consultation paper, centrally determined baselines raise concerns about the extent to which they may be “gamed”. Apart from setting them centrally they can also be administered centrally – this occurs in Singapore’s energy-only market where DR aggregator’s submit a baseline to the market operator, who then administers it.

Disaggregated - agreed by two or more market participants. This is what occurs now.Under this an end-user who wants to receive a specific payment for exercising demand response, achieves it through negotiation with their retailer. The retailer gets the benefit of reduced AEMO settlements, and can package the saving into a specifically itemised customer payment.  Any errors in calculation will be contained to the two willing parties and not passed onto others not involved in the arrangement.

This potential was highlighted by the report produced by the Brattle Group for the AEMC when it considered DR in 2015.  Brattle reported that in the US:

“In the case of Lincoln Paper and Tissue LLC, a paper mill in Maine, FERC[iv] determined that Lincoln increased its baseline by reducing its use of on-site generation during the initial baseline period and instead drawing additional power from the grid. Lincoln then offered demand response into ISO-NE’s DALRP[v] on a daily basis at the minimum offer price, which almost always cleared in the market, and replaced the artificially high level of power it had pulled from the grid during its initial baseline period with power from its on-site generator. FERC found that Lincoln had violated the Commission’s regulations and provisions of the Federal Power Act which prohibit energy market manipulation, and directed Lincoln to pay a $5 million civil penalty and disgorgement of over $0.3m, plus interest.”

Another example involved the Baltimore Orioles baseball stadium in Maryland. “Enerwise Global Technologies, a demand response service provider participating on behalf of the Maryland Stadium Authority, reached a settlement with FERC after an investigation into allegations that Enerwise attempted to achieve artificial baseline inflations at the stadium. The Orioles stadium lighting was turned on after PJM declared an emergency event scheduled to start two hours later, even though no baseball game was played that evening, thereby increasing its load in the pre-event hours and potentially increasing the baseline that could have been used to assess DR during the emergency event.” The case was settled with Enerwise agreeing to pay a civil penalty.

Irrespective of attempts to increase the baseline, establishing accurate demand response baselines can also be challenging simply due to factors, such as changing weather, changing business practices, and other fluctuations in load during an event. While no perfect solution exists to completely address the challenges of establishing demand response baselines, some markets have taken steps to reduce the possibility of miuse.

In Singapore, for example, because of concerns around gaming in the use of centrally determined, historical baselines, its Energy Market Authority requires the DR provider to submit its own baseline through a bidding process and it then faces penalties if the customer uses less than the baseline when not called upon. The DR is subject to a penalty if its load falls below 95 per cent of its baseline bid. The Brattle Group notes that the downside to  enforcement via penalties is that it has discouraged participation[vi].

Demand response is a tool which can improve power system reliability and, with the appropriate market signals, reduce customers’ bills.  There is significant difficulty in establishing what customers’ consumption would have been had they not participated in demand response, and any framework established must ensure the bargain struck between the customer and the demand response provider is equitable for both parties.