What are the implications of a distributed energy future?

Western Australia is in the midst of a “significant transition” according to the WA Economics and Industry Standing Committee's recent report, with Horizon Power also describing the transformation as “being driven by the combined forces of the three D’s: decentralisation, digitisation, and decarbonisation[i].”

The Implications of a Distributed Energy Future – Interim Report aims to provide a snap shot of distributed energy resources (DER) in WA, and context for the Final Report’s subsequent consideration of the challenges, opportunities, enablers and barriers for microgrids[ii].

In its Interim Report, the Committee says that this shift to more localised energy has created an opportunity for a range of new energy management technologies that are increasingly cost competitive and can deliver a range of benefits, such as increasing the efficiency of existing network infrastructure, opportunities for new jobs and economic diversification, as well as the export of intellectual property, services and products globally. They can also help to reduce the carbon intensity of WA’s energy sector.

However the implications of increased DER penetration are significant. We recently covered the key technological considerations and customer implications of DER development in the context of WA’s electricity reform in previous EnergyInsider articles. The report also notes that there are a range of commercial and operational challenges, particularly associated with a higher proportion of unscheduled generation on WA’s power systems, saying “WA’s ability to capture the benefits offered by microgrids is contingent on the complex interplay between physics, technology, markets and regulatory structures.”

Figure 1: Schematic of a larger microgrid 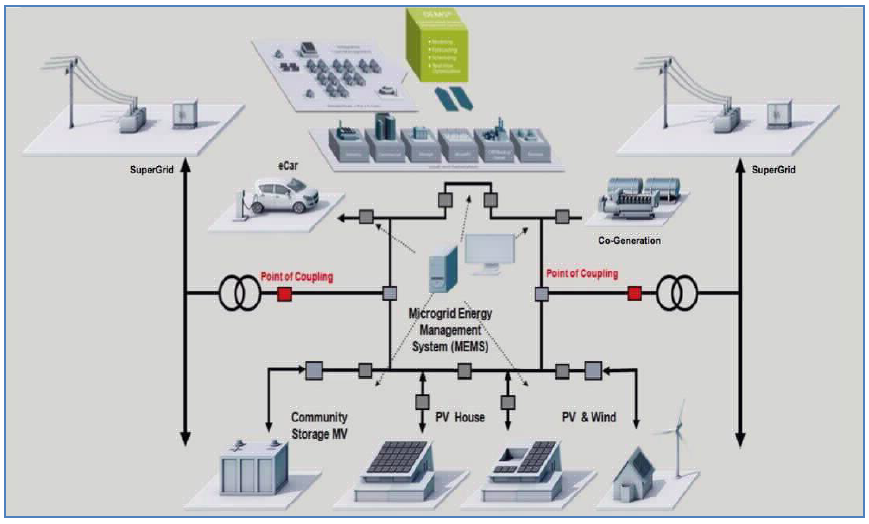 According to the report, microgrids have been well received within the state’s power industry, which is backed by the Clean Energy Council’s statement that WA “is leading the nation on the use of microgrids. Trials in WA have already demonstrated that microgrids can supply electricity more cheaply, more safely and more reliably than the traditional ‘poles and wires’ approach.”[iv]

WA energy utilities are leading the way in facilitating changes and developing large and small-scale renewable energy projects. Innovators across the state’s energy sector are exploring local co-operatives and block-chain platforms for energy trading, there are entire subdivisions and communities aiming towards more sustainable energy solutions, and local renewable generation and battery technologies are being combined with traditional grid sourced power. Some examples of projects discussed in the report include:

- The Kalbarri microgrid project: Kalbarri is “on the end of an enormously long 140-kilometre distribution line”[v] from Geraldton that is impacted by storms and interference causing extended outages. Western Power aims to construct Australia’s largest microgrid to help establish a stable energy supply for the town. Shown in figure 2, it will include a utility scale battery as its centrepiece charged by a combination of network, wind and solar sources. It will be able to supply 5MW of peak capacity with at least 2MWh of energy storage[vi]. The project is expected to be completed by mid-2019. 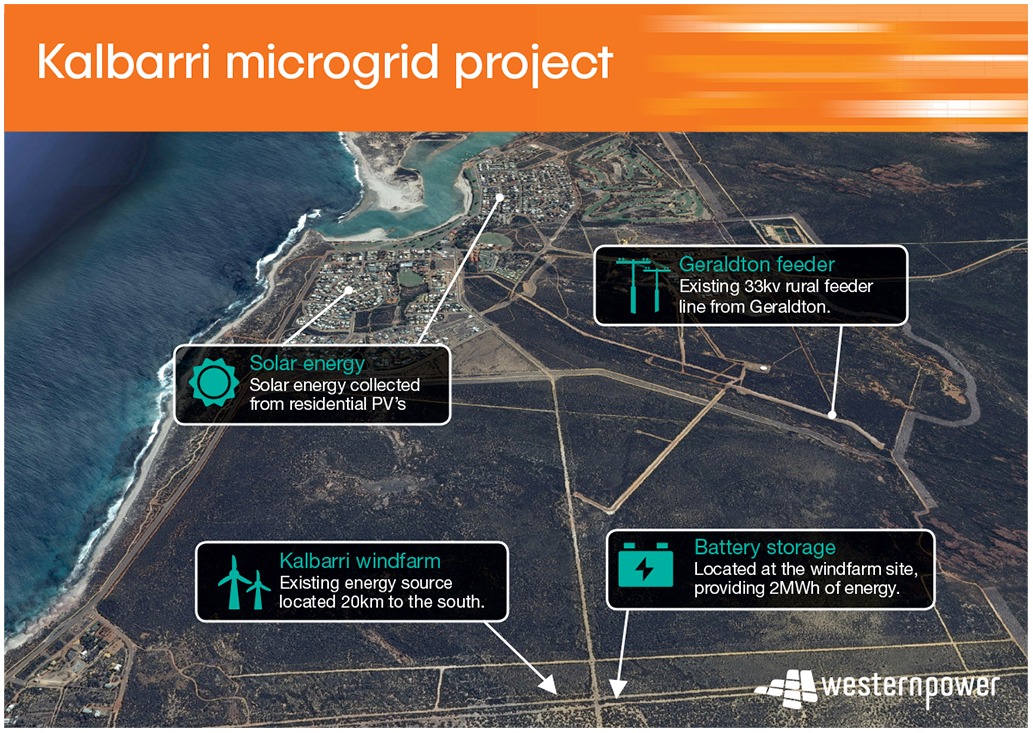 PowerBank: Grid-scale battery technologies, such as Synergy and Western Power’s PowerBank trial in Mandurah, have the potential to offer households with access to energy storage where they may otherwise struggle to afford individual household-scale batteries. One in four homes in Mandurah have solar panels installed – making it Australia’s second highest solar suburb. In this national-first trial to integrate bulk solar battery storage into the existing grid, the 105kW (420kWh) community battery allows 52 households to each store up to 8kWh of excess solar energy from their own PV panels, at a cost of $1 per day. They can then draw down on this energy at night. The battery will also support the region’s grid during periods of peak demand.

SPS stage two: In 2016, Western Power tested the suitability of Stand-alone Power System (SPS) technology across six rural properties. Results showed that customers experienced “significantly fewer” power interruptions than customers on the same network and the SPS were robust enough to survive extreme weather events[vii]. Stage two of the trial will see a further 58 SPS units installed in regional areas across the SWIS. The locations for stage two were chosen not only because they are located at the fringes of the grid, but also due to the age of the assets. According to the report, Western Power said that the SPS units would give the customers “a reliability factor that is as good as metro”. The trial will last for three years. 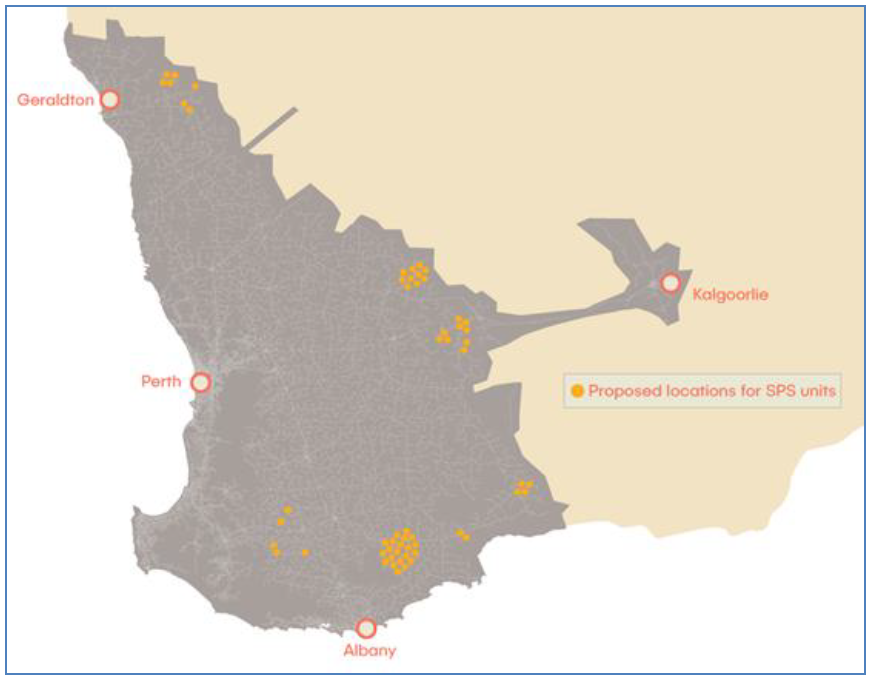 Beyond the immediate application of microgrid technologies to the supply of electricity, there are also significant opportunities for WA along the DER asset value chain. According to the report, the state has a set of global competitive advantages: it is replete with the raw material inputs for battery manufacture; has a mature and sophisticated mining industry; well-established transport links; and a politically stable environment in which to do business. Pursuit of the value chain opportunities in DER could generate employment opportunities throughout the state and deliver significant economic growth.

WA’s most obvious prospects lie in commodities production, according to the Committee, but there are chemicals processing, component manufacturing and assembly opportunities as well. The report notes that battery technology will be key to the success of microgrids and vital to the development of electric vehicles (EVs) – and this presents an opportunity for many of the raw commodities and components used to power EVs to be sourced or produced in the state. 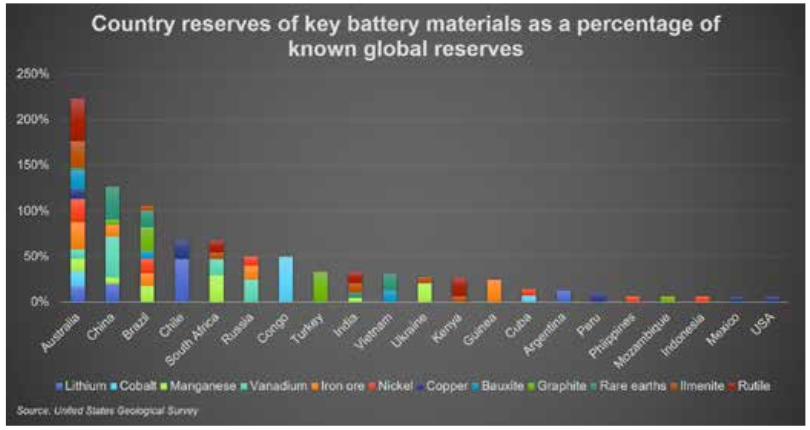 Shown in figure 5, the development of projects to refine the lithium and move along the lithium-ion battery value chain could provide the state with tens of thousands of new jobs[viii]. And the rapid development of lithium exports from WA over the past five years places it in a position to supply about 60 per cent of the world’s annual consumption. 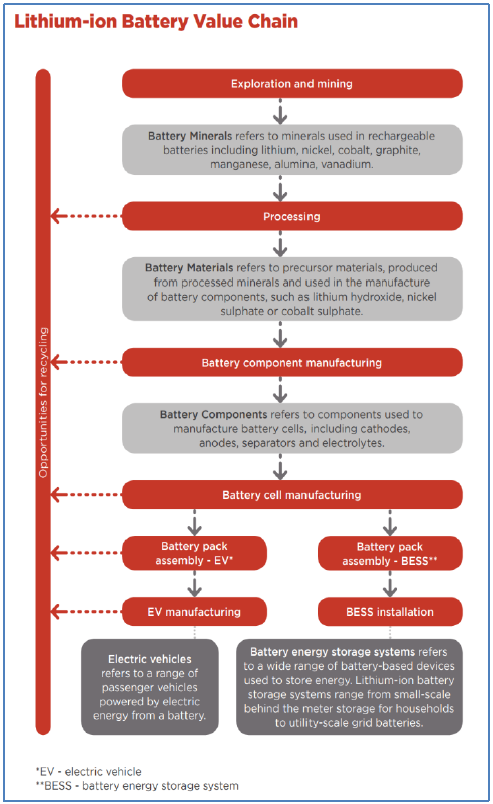 While the report notes that the uptake of EVs in Australia has been slow, it also points to the Clean Energy Finance Corporation’s (in conjunction with ARENA) Australian Electric Vehicle Market Study report, which finds that EVs could represent 90 per cent of all cars and light commercial vehicles on Australian roads by 2050. And while the Committee states that WA is arguably yet to acquire the scale required to move into the later stages of battery production, a number of global battery industry participants are currently deploying capital into WA and considering further investment along the value chain. In January 2019, the WA Government released its Future Battery Industry Strategy in an aim to capture the benefits of a growing global demand for battery technologies. The State Government has also sent signals into the market through its support for the Future Battery Industries Cooperative Research Centre, in close collaboration with industry and the research community.

The Final Report, expected to be tabled on 31 May 2019, will examine the implications of a distributed energy future and will outline the major operational considerations, discuss regulatory, policy and market frameworks that affect microgrid technologies and consider key enablers and  barriers to their further expansion. 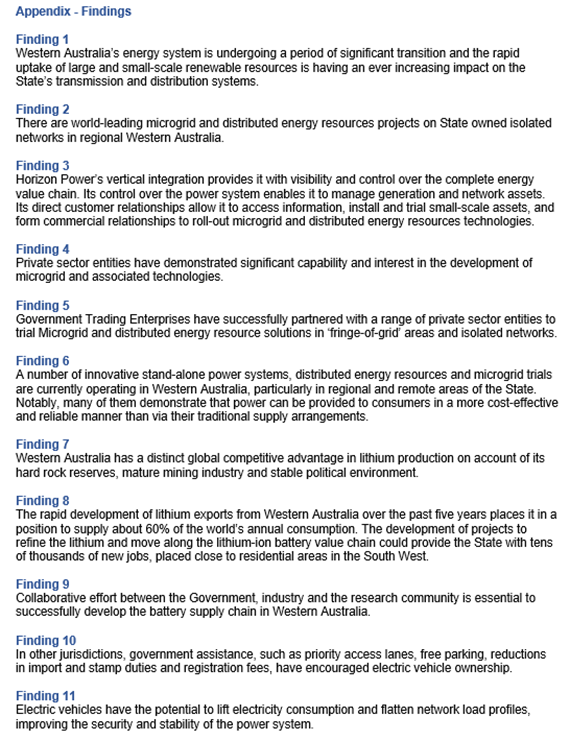 A complete copy of the interim report may be found here.

[ii] The Report notes that the US Department of Energy’s definition of a microgrid is increasingly accepted as industry standard: characterised by multiple, individually metered prosumers, consumers and producers within an electrically defined segment of the wider legacy grid, often also within identified geographic boundaries (e.g. local government area, suburb, subdivision or industrial area). However, it also states that this definition of ‘microgrid’ should be distinguished from Stand-Alone Power Systems (SPS), Embedded Networks, Virtual Power Plants, and Non-Interconnected Systems.

[iii] The SWIS includes Perth and spans from Albany (south), to Kalgoorlie (east), up to Kalbarri (north).