This week the Victorian Government announced the outcome of its renewable energy reverse auction scheme, which had targeted 650MW of renewable generation projects. The government announced that the auction actually attracted 45 per cent more generation (928MW) after the goal was “smashed”[i].  The auction guarantees output price for project developers via 15-year contracts, however it appears this only applies to 669MW of the 928MW of capacity being built, whilst the other 259MW will be exposed to the market[ii]. Total capital investment in both forms of capacity is $1.16 billion.

The original target was made up of 550MW of large-scale “technology neutral” renewable energy and up to 100MW of large-scale solar. In the end there was 254.6MW via three solar farms and another 673.5MW in wind farms (full details of the winning projects can be found here and their locations are shown below). 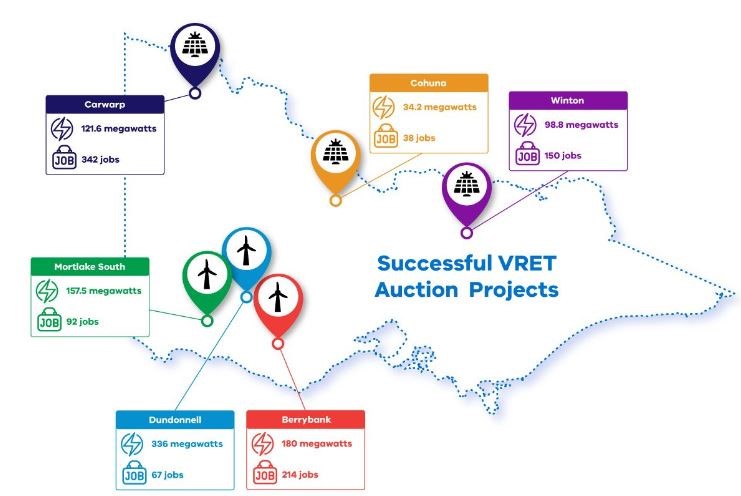 Assuming financial close and that all conditions are met, construction of the projects is expected to begin early next year with the solar projects to be operational by early 2020 and the wind farms to start generating by the end of September 2020.

The reverse auction is broadly aimed to help achieve the Victorian Government’s legislated renewable energy target (VRET) which is targeting 25 per cent of all generation by 2020 and 40 per cent by 2025, however there is no clear material as to exactly how the target’s accounting is performed and to what extent these projects would achieve it.

The price achieved was based on contracts for difference (CfD) that provide the project proponents with prices of between $53.06-$56.85/MWh[iii]. There is also an undisclosed fixed price payment, which is intended to reflect the guaranteed revenue required by proponents to support the project in addition to the certainty provided by the CfD[iv]. So, we can’t really be sure what the total price of energy is from these plants, although directionally they seem to confirm the impressive falls in technology costs that have been reported elsewhere.

The large scale generation certificates (LGC) created by the projects under the Federal Renewable Energy Target will transfer to Victoria with any value recouped from them going into state revenue[v]. However the LGC forward curve suggests there will be little value in these when delivered[vi].

The CfD were “on budget” meaning their costs will fall on Victorian taxpayers rather than electricity consumers - a change from previous environmental subsidies. To borrow from Jean-Baptiste Colbert, perhaps that goose was hissing too much as a result of its previous pluckings.

The Victorian Government has not committed to further auctions at this stage stating that it will determine the need for any additional bids to meet its VRET target “based on market and national policy conditions”.

What is difficult to assess is the full exposure of Victorian taxpayers under the auction scheme given the CfD design and undisclosed amount of the fixed price payment, additional transmission costs, and the impact on longer term system reliability. Each project was required to bid a minimum payment cap which is undisclosed.

Strike prices in the mid $50s per MWh are actually lower than the average Victorian price at present, so this might at first seem like a good deal for the government. However the story is more complex. The forward curve already shows prices are expected to fall back in the next few years, noting that as recently as 2014-15 the wholesale price averaged only $30.36/MWh in Victoria.

But more significantly, the amounts owed under the CfD will be determined for each 30-minute trading interval multiplied by the actual output of the plants[vii]. With more renewable generation entering the market it is likely that during periods of high wind, and especially high wind and sun, there will be periods of surplus supply when (as we see in South Australia presently) the price is below the strike price and close or below zero. Conversely in periods when intermittent generation is low there is likely to be a spike in wholesale prices. So the generator output -weighted price against which the Victorian Government will pay out will be considerably lower than the average price that customers pay.

The South Australian “wind-weighted” price graph below shows an example of this effect. As the penetration of wind in that region has grown, the discount that wind generators earn from the average or “time-weighted” price has grown. 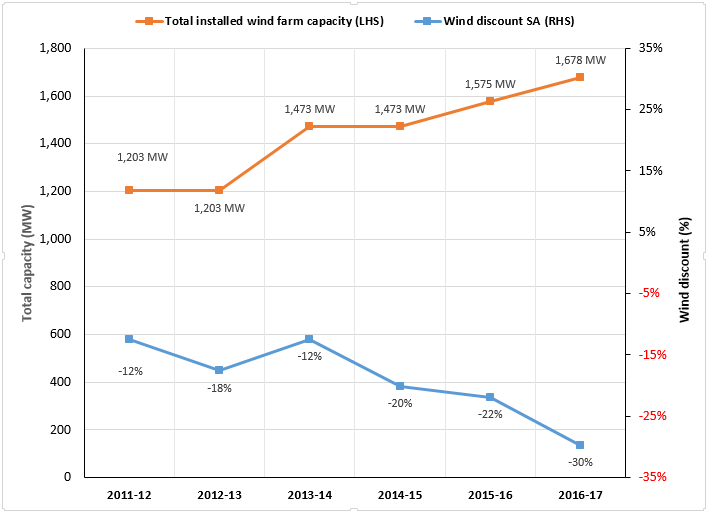 This effect has only started to emerge in Victoria, but in time may be proportionally worse because Victoria is dominated with brown coal plant that was not designed to switch on and off like South Australia’s gas plants do when the wind varies. Brown coal cannot “get out of the wind’s way” so in time all Victorian generators may face long periods of negative price during high wind and sun.

A CfD design with a government has other strange effects. It removes all market incentives from the generator except one – maximising bulk energy output. For example, wind and solar farms can buy cheaper equipment that cuts out in extremely hot weather, and as that happens for only a few hours a year in Victoria, it only very marginally reduces their annual energy output. For most generators, the very high prices that occur in hot conditions justifies investing in better equipment, but the CfD removes this incentive.

Another feature is that the CfD effectively leaves the government with a “long” contract position. This form of contract is usually sought by retailers, to offset their naturally “short” position from having to pay the Australian Energy Market Operator (AEMO) for their customers’ consumption. Typically retailers would include contracts with renewable generators amongst a portfolio of other options in order to balance their position. Yet having a large new participant, the state government, effectively taking on a large uncovered long position which it does not then transfer to retailers seems likely to unbalance the broader Victorian contract market.

The siting of the projects was driven by the concentration of the solar and wind resource, according to the government, as well as access to terminal stations to link them to the transmission network[viii].

For some years AEMO, as Victorian transmission planner, has been warning of challenges created by the connection of renewable energy in the west of the state, an area that was not designed as a generation centre. The operator is attempting to address this with planning processes, including a long-running Western Victorian Regulatory Investment Test for Transmission (RIT-T)[ix], which has been dealing with a moving feast of numerous connection proposals. Exactly what investments it will recommend is unclear, but its most ambitious option included a 500kV project costing up to $1.1 billion. These are costs paid by Victorian customers.

We will never know exactly how much the VRET will increase Victorian transmissions costs – the RIT-T will take these as well as non-VRET projects into account in its calculations. It appears that the Mortlake South and Dundonnell windfarms will connect to the existing 500kV system which does have some remaining spare capacity, and the Winton solar farm is in the relatively uncongested North-East. However Carwarp, in the far North-West, is located in an area known to have a very thin, weak and high-loss network.

The government claims that the diversity of supply resulting from the additional renewable projects will improve Victoria’s energy reliability. This seems a counter-intuitive claim. As well demonstrated in South Australia, there is risk in pushing significant amounts of renewables into a system with funds external to market signals.

The government has also emphasised that the additional renewable energy will drive down prices[x] . While additional supply will, in the short-term at least, push down wholesale prices in the hours that the wind is blowing, the risk is that it could impact on the business case for existing generators and thus lead to earlier closures than currently anticipated which will ultimately lead to higher wholesale prices.

“The initial growth in renewable generation appeared beneficial for consumers in South Australia. It reduced greenhouse emissions and suppressed wholesale electricity prices as a result of the excess supply created. Reliability and power quality were not compromised because the dispatchable fossil fuel plant was still available to provide energy and grid stability when required. But some of this thermal plant located in South Australia has subsequently become uneconomic as the cost of repair and refurbishment exceeds the reduced margins from weaker wholesale electricity prices.”[xi]

Higher price variability in the South Australian wholesale market also led to an increased cost of managing risk with electricity derivatives, used to offset generators’ and retailers’ exposure to market volatility, increasing in price.  The volume of derivatives decreases as firm generators leave the market and intermittent generators and peaking generators are not able to offer baseload contracts.