The US Energy Information Administration recently released its latest Annual Energy Outlook 2018 (AEO), which projects key trends likely to affect the US energy markets over 2017-2050.

The US has been a net energy importer since 1953, strong domestic production coupled with flat energy demand are expected to spur the US to become a net energy exporter by 2022[i]. This change occurs even earlier in some of the report’s ‘sensitivity cases’, which assume larger growth in natural gas production.

The AEO’s projections are modelled on different assumptions, as future market events cannot be confidently predicted.

The report includes sensitivity cases (e.g. Low and High Economic Growth; Low and High Oil Price; Low and High Oil and Gas Resource Technology), which include different assumptions to reflect possible future events in the US energy markets, changes in technologies, and developments in resources.

Here, we mainly focus on the report’s baseline – or ‘reference case’. The reference case assumes trend improvements in known technologies. It does not predict future energy policy and acts on the assumption of current laws and regulation (therefore the phasing out of current solar and wind policies are included within its projections). More information about the report’s assumptions is available here.

US energy consumption increases an average of 0.4 per cent per year, totalling around 13 per cent by 2050 (less than the annual rate of expected population growth of 0.6 per cent). Projections show that the consumption mix shifts over 2017-2050; natural gas is a standout performer and has the greatest growth rate on an absolute basis (figure 1).

Non-hydroelectric renewable consumption grows the most on a percentage basis (figure 1). The report predicts that a combination of reductions in technology costs, coupled with state and federal policies to encourage the use of renewables, is expected to reduce the costs of renewable technologies, which in turn will support their wider adoption. 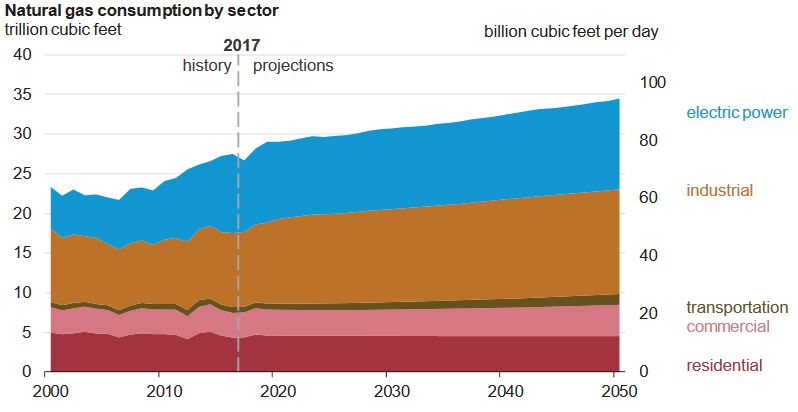 Energy-related carbon dioxide (CO2) emissions remain mostly flat through to 2050 (figure 3). Natural gas emissions grow at 0.8 per cent per year, while coal emissions decline at a rate of 0.2 per cent. 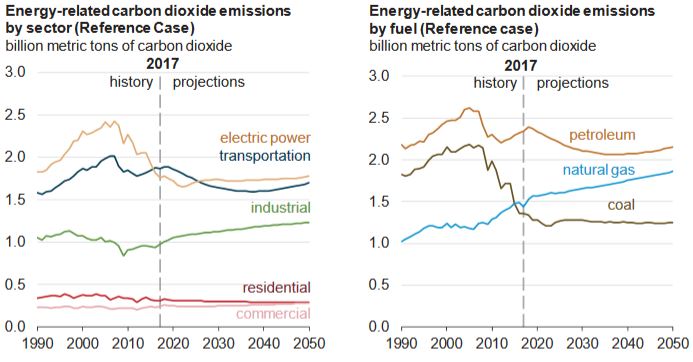 Mirroring consumption trends, emissions from the industrial sector increase the most (0.6 per cent annually), which can be explained by the relatively low cost of natural gas prompting an increase in usage and emissions.

For the electric power sector, emissions remain predominately flat to 2050. This is expected to be a result of a good natural gas market and government policies that encourage the uptake of renewables. 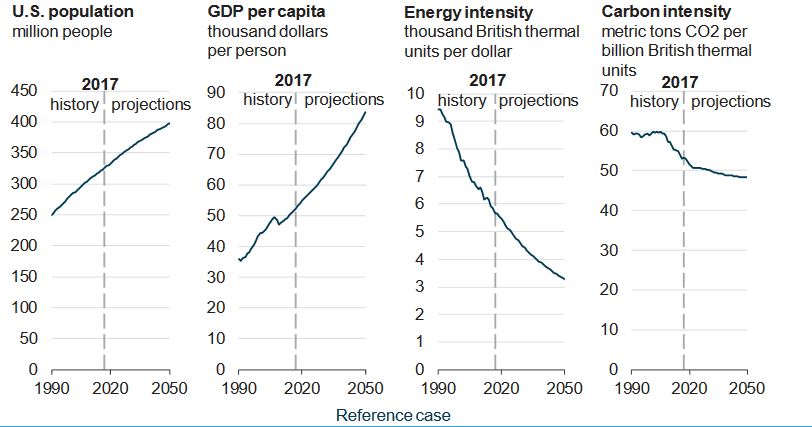 While both the country’s population and economy are projected to rise through to 2050, there is a decline in energy and emissions intensity “as energy efficiency, fuel economy improvements, and structural changes in the economy reduce energy intensity”.

By 2050, energy and carbon intensity are expected to be 42 per cent and 9 per cent lower respectively, when compared to 2017, which is expected to be due to the changes in the energy mix (figure 4).

US energy production is projected to increase at a rate of 0.8 per cent annually, reaching around 31 per cent by 2050. This is led by increases in the production of non-hydroelectric renewables, natural gas and crude oil (figure 5). 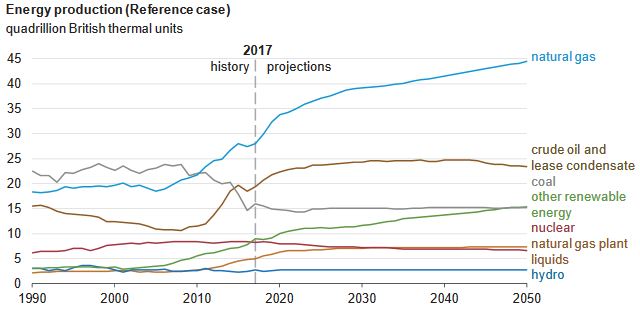 While US natural gas consumption grows, production surges at a higher rate. Natural gas forms the largest share of country’s total energy production, at almost 39 per cent by 2050. It is expected that shale gas and tight oil will account for more than three-quarters of natural gas by 2050.

Wind and solar generation grow the most on a percentage basis, accounting for 64 per cent of the total electric generation growth through 2050. Hydro, nuclear power and coal production remain relatively flat.

Increases in energy efficiency has tempered US electricity demand, with the country experiencing flat growth for the past decade. Demand growth was negative during 2017, but it is projected to slowly increase through to 2050. 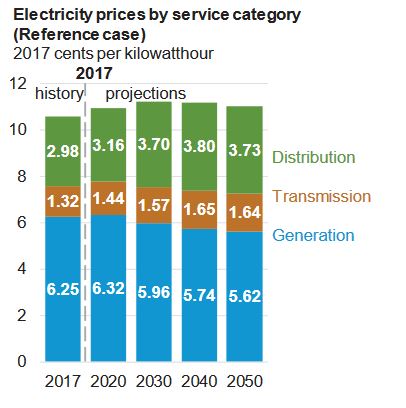 When compared to 2017, the generation cost component of electricity prices is expected to decrease by 10 per cent by 2050, due to low natural gas prices and increased renewable generation (figure 6). Transmission and distribution cost components increase by 24 per cent and 25 per cent by 2050, respectively. The report states that this reflects the need to replace “aging infrastructure and upgrade the grid to accommodate changing reliability standards.”

Natural gas prices are projected to remain lower than $5 per million British thermal units through to the end of 2050. While the costs associated with adding new renewable electricity generation capacity are expected to steadily decline, especially for solar PV systems[iii].

As such, it is expected that the generation mix will be susceptible to the price of natural gas and the growth in electricity demand.

The US energy mix is projected to increase in the use of low, or no, carbon fuels. In the near term, fuel prices are anticipated to drive the share of natural gas and coal-fired generation.

The higher natural gas prices in the Low Oil and Gas Resource and Technology case leads to increased levels of coal-fired generation. 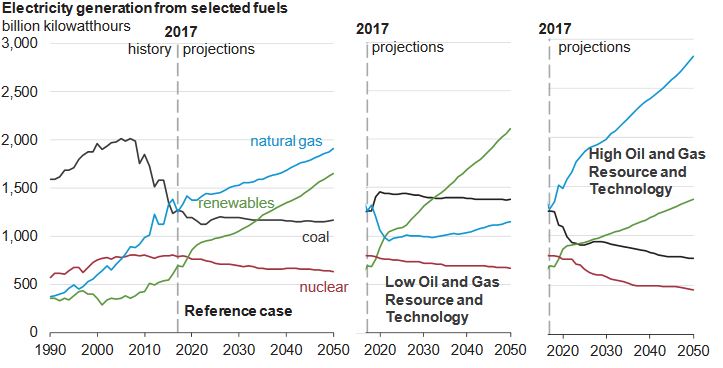 In the longer term, the AEO projects that the relatively low cost of coal will determine the decline of coal-fired generation. Coal capacity falls by 65 GW between 2017 and 2030, before levelling off to near 190 GW through to 2050. The report projects that high gas prices could slow the pace of coal retirements, and conversely, retirements are likely to increase if gas prices fall.

Cheap gas is also expected to trigger the retirement of 20 per cent of nuclear capacity. In the reference case, if natural gas prices decrease, nuclear capacity reduces from 99 GW in 2017 to 79 GW in 2050, with no new plant additions after 2020[iv].

The AEO replaces coal and nuclear with natural gas, wind, and solar capacity. Low gas prices could limit the growth of renewables, but across all cases, they are still expected to steadily rise. Renewables are expected to grow 139 per cent, reaching 1650 billon kilowatthours by 2050. Wind and solar generation form 94 per cent of this growth. 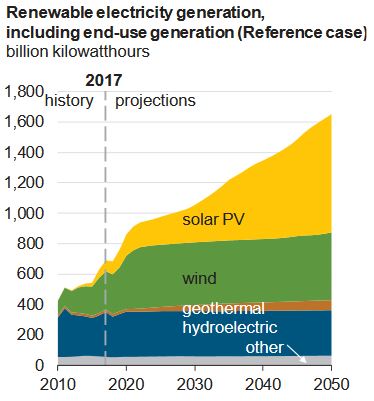 Another strong trend identified by the AEO is the growth of battery powered vehicles, which we looked at in a previous article, found here.

The AEO’s energy market projections are subject to much uncertainty, for example, its reference case projections do not include the Obama administration’s Clean Power Plan, as there is a plan to dismantle it (the report does, however, look at the Clean Power Plan as a side case). As such, the future of the US energy markets will be highly susceptible to changing government policy over the projection period, as well as changing developments in technology and resources.