US and Australian energy challenges: Same, same but different

Just after arriving as the new US Energy Secretary, Rick Perry asked the US Department of Energy (DOE) to consider the US electricity markets and their reliability.

That report – Staff Report on Electricity Markets and Reliability[i] – has just been released and highlights that the US is facing similar “unprecedented change” to Australia.  It points to a record-high amount of generating capacity retiring, a need to consider reliability and resilience of the grid as more renewables enters the system, and exposure to gas price risk related to availability “growing concern in several regions”.  Demand growth has continued to slow and is roughly flat. Sound fairly familiar?

One significant difference between the US and here is the more significant role of gas in that market and the report notes that with a sustained drop in the natural gas price (largely due to shale gas developments) combined cycle gas turbine (CCGT) plant is now a less costly source of baseload generation than coal or nuclear power in many regions of the states. Figure 1 shows retirements and new builds in the US. The growth in gas and renewables in the mix is evident below. 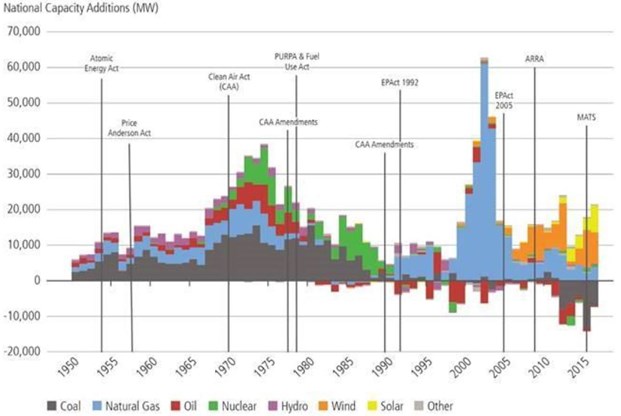 Source: Staff Report to the Secretary on Electricity Markets and Reliability

The DOE notes that power plant retirements have accelerated since 2011 and most plants are closing or threatening to close because they can’t compete against primarily low-cost, gas-fired generation and, to a lesser extent, subsidised and mandated renewable energy in a low electricity demand environment.

The DOE report notes that many of the plants that closed between 2002 and 2016 were used for baseload generation, but were no longer operating in the same role because of changes in the dynamics and changing mix.

The report notes that renewable sources, such as wind and solar, are beginning to serve more of a minimum load and the proliferation of renewables has led to grid operators in some regions placing an increasing premium on flexible generation, such as CCGTs, to help balance the variability of renewables. It notes that there is concern being expressed about the trend of retirements of firm generation and its impact on reliability and resilience[ii].

In its conclusion the DOE found that market designs may be inadequate given potential future challenges – as occurred in South Australia it notes that renewables at high penetration will lower wholesale energy prices and put additional economic pressure on revenues for traditional baseload resources, requiring careful consideration.

As in the National Electricity Market (NEM) it noted that system operators are working toward recognising, defining and compensating for things that enhance reliability and resilience of the grid (such as frequency control) but what was needed was to quickly establish the way to value them or the regulatory framework to provide them.

The DOE report includes an assessment from the North American Electric Reliability Corporation (NERC) on the implications of the energy mix on reliability and grid resilience which is outlined in the panel at the end of this article.

The department also notes that generation from renewables can change widely over the course of a day, which requires dispatchable or firm generation to be operated more “nimbly” and if there is over-generation from renewables during the day it will push prices to zero yet require quick ramping assets when renewables subside – this is putting a premium on flexible output rather than the traditional steady output. While the flexibility in the system normally comes from generators, other areas like flexible demand, increased transmission and energy storage technologies are being explored as ways to improve system flexibility.

Recent severe weather events had also demonstrated the need to improve system resilience with the system needing to be designed to handle high-impact, low probability events.

Ultimately, the continued closure of traditional baseload power plants calls for a comprehensive strategy for long-term reliability and resilience with states and regions accepting increased risks that could affect future reliability and electricity supply to consumers.

The report concluded its key findings with the comment that: “Hydropower, nuclear, coal, and natural gas power plants provide ERS [Essential Reliability Services] and fuel assurance critical to system resilience.  A continual comprehensive regional and national review is needed to determine how a portfolio of domestic energy resources can be developed to ensure grid reliability and resilience.” 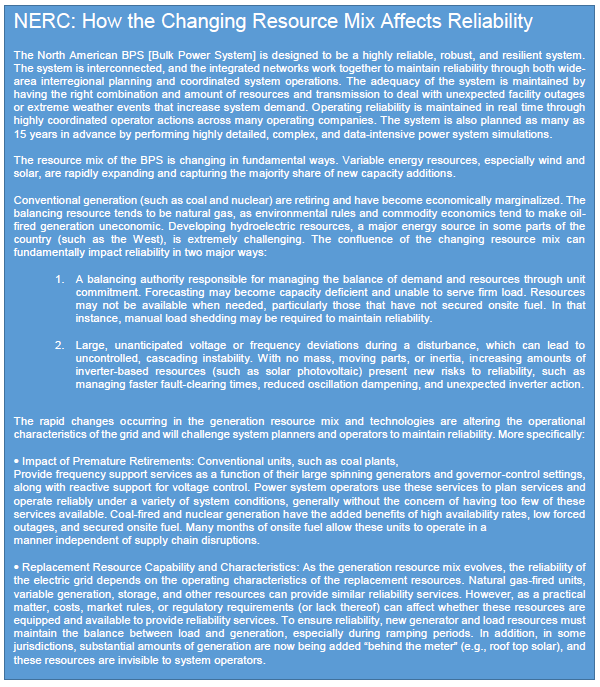 [i] Staff Report to the Secretary on Electricity Markets and Reliability, U.S. Department of Energy