Turning it to the right frequency on renewables

In late 2015, during a planned outage of part of the Heywood interconnector between Victoria and South Australia, the Australian Energy Market Operator (AEMO) purchased additional Frequency Control Ancillary Services (FCAS) in South Australia. AEMO’s decision was based on the need to keep the power system stable in the event that the remaining interconnector tripped and this resulted in very high FCAS costs.

AEMO procures FCAS to ensure that the power system remains secure if there are unexpected events, such as the loss of a generator or an interconnector. The efficient procurement of FCAS will be an essential part of the process of managing the integration of highly variable renewables to the National Electricity Market (NEM) because they assist AEMO to balance the grid and mitigate the risk of outages.

It is the intermittent nature of new renewable electricity that creates challenges for systems and markets that were designed around dispatchable generators such as hydro, nuclear or fossil-fuelled plants. These conventional plant types also have characteristics that allow them to contribute to the stability of the grid, including keeping frequency and voltage levels consistent and being able to restart the system after a major blackout. Solar is not designed to contribute in this way, and while wind can (in limited cases) assist, its intermittency precludes its use as a reliable source for grid stability[i].

At current levels, the intermittency (particularly from wind) is having a material impact on South Australia’s electricity market, as well as the security of the electricity grid. The challenge of integrating renewables is likely to require AEMO to procure more stabilising services such as FCAS to ensure a secure power supply and avoid blackouts, at the same time as the supply of FCAS will decrease. 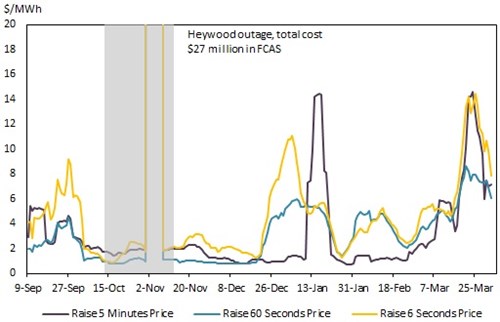 The increase in renewable generation, like wind and solar PV, which are highly variable will in turn reduce the amount of dispatchable generation that provides FCAS[ii]. As potential suppliers of FCAS decrease, it is likely that the price of FCAS will increase, if all else is held constant.

AEMO estimated that normally costs for the total quantity of FCAS required in the NEM between October and November 2015 would have been around $500,000. The actual cost during the Heywood outage was approximately $27 million[iii]. The majority of these costs will eventually be charged to consumers after being recovered from market participants in South Australia[iv].

On 9 May 2016, Alinta’s Northern and Playford power stations were closed (Playford had previously been mothballed), removing stabilising synchronous generation from the South Australian region. In the period of time since the closure, South Australia has been reliant on wind for 60 per cent of generation[v]. The impact of this change in supply and higher penetration of renewables is seen in the prices for FCAS on the day of the closure, and shortly after, as AEMO and the market adapted to the exit.

Figure 2: SA FCAS price during May 2016, around the Alinta plant closures 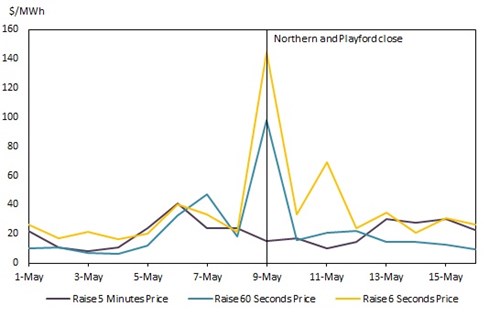 AEMO has relied heavily on power system-stabilising services provided by fossil fuel generators which have been relatively abundant and low cost[vi]. As renewables become a larger share of the energy mix the supply of power system-stabilising services will fall. At the same time, higher amounts of renewable energy will increase the need to stabilise the power system and increase demand for FCAS. AEMO’s current measures to address stability are sufficient. But as the power system continues to evolve, there will be a need for changes to market arrangements or infrastructure to continue to meet security and reliability expectations.