While there’s been much debate about how to make the transition to Net Zero, a new report aims to quantify the potential risks and financial implications if Australia’s path to decarbonisation is delayed.

The CSIRO report - Exploring Climate Risk in Australia - looks at the economy’s exposure to climate-related transition risk, and aims to be a “first step” to identifying which industries will have greater risks if the transition to Net Zero is delayed.

The CSIRO in collaboration with KPMG and Energetics, contrasted a ‘Current Policies’ scenario - a “business-as-usual” approach with current policies and rising global greenhouse gas emissions - with a ‘Delayed Transition’, where decarbonisation begins in earnest from 2030, resulting in a more rapid transition towards Net Zero emissions over the final two decades.

It says while Australia’s target of Net Zero emissions by 2050 provides an economic signal for decarbonisation, the current 2030 target of 26-28 per cent reduction on 2005 emissions could result in significant decarbonisation in the final two decades, leaving some sectors and states exposed to increased challenges. When compared to the business-as-usual approach, Australia’s CO2 emissions would have to drop around twice as much under a delayed transition scenario.

Emissions intensive sectors decline in the delayed transition scenario due to the slowed but then rapid growth in renewables, electrification, and negative emission technologies during the final two decades to 2050. The report notes the key drivers include:

While the analysis shows elevated risks to emissions intensive industries under the delayed approach scenario - particularly coal and to a lesser extent gas - the most exposed industries such as coal mining, fossil fuel dependent electricity generators, agriculture, and manufacturing, have greater exposure and the most to lose if they postpone action.

Some of the report’s other key findings include:

The report notes the impacts on industries like coal mining is “reasonably understood”, but there is less focus on other heavily affected industries, such as agriculture and emissions-intensive manufacturing. And while declines are shown in industries across mining, mineral processing, and agriculture, the sectorial impacts are “nuanced” - for example, according to the report:

The analysis also potentially understates some of the opportunities in emerging industries, such as hydrogen and commodities to facilitate low carbon industries. According to Dr Stuart Whitten, lead author of the report, the report “undersells” the physical risks of climate change, like extreme weather and climate-change events because they are difficult to predict. But it’s clear they will have negative economic consequences, with the latest Intergovernmental Panel on Climate Change (IPCC) report predicting that Australia can expect more hotter days, extreme fire weather, and heatwaves.

According to Dr Whitten there needs to be more awareness of how different risks interact with each other, especially when looking at connections across the globe, and says it’s worth highlighting the range of decarbonisation options already available:

“For example, increased electrification across the economy drawing on growth in renewables. Or reducing agricultural emissions through a range of crop and livestock practices. As more and more of these emerging technologies mature and are adopted by different sectors across our economy they will catalyse an even greater range of new opportunities that can make a material impact on emissions reduction.”

Impacts of delay: Across the states

Delaying action to Net Zero will leave the nation’s economy smaller according to the report, with the increased sectoral risks due to rapid decarbonisation flowing to households through increased cost-of-living. 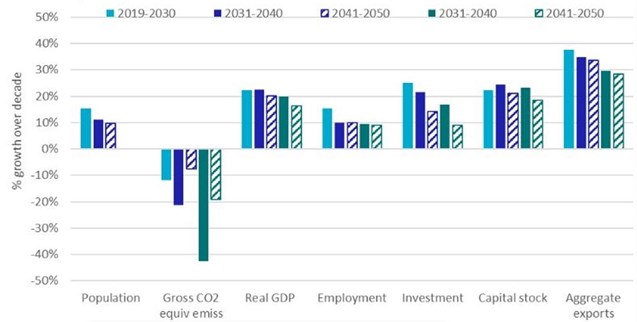 Impacts will vary across the nation, with some states more exposed than others. As a major supplier of thermal coal and gas, Australia is especially exposed to potential drops in export demand.

With a delayed effort, the need to rapidly decarbonisation between 2030-2050 would hit Queensland’s coal industry hardest with a “substantive” decline in exports due to the relative size of its export coal industry compared to the wider state-wide economy. New South Wales is similarly exposed, but coal exports form a smaller part of that state’s economy. Conversely, Western Australian iron ore and other mining are projected to grow.

However, the report notes:

“These impacts could be mitigated. Higher short-term decarbonisation targets coupled with domestic policy certainty could assist to smooth the transition, avoid shocks, allow coordinated transition plans to be developed for the most vulnerable industries, and enable higher confidence to attract investment in emerging low emissions industries and technologies.”

By 2050, GDP per capita would be 5 per cent lower and there would be 1 per cent fewer jobs, under the delayed scenario. Relative to current levels, the overall economic impacts on household income and consumption are highest in New South Wales and Victoria. For example, higher input prices under the delayed transition scenario would hit the food manufacturing industry flowing through to higher cost-of-living for consumers.

While a lot of the public debate around Net Zero emissions has focused on changes to Australia’s electricity system, the report notes some challenges show less influence on the nation’s Net Zero trajectory.

The modelling shows Australia may not be as exposed in some areas, as first thought. According to Dr Whitten electricity generation had the clearest transition roadmap towards Net Zero, but industries such as mining and other emissions-heavy industries like mineral processing, are more exposed to risk:

“In the electricity sector, for example, we already have a strong transition plan … But in general, we can say that a faster transition will be a harder one for those fossil fuel intensive industries.”

Climate risk is complex, and according to the report the variability in results from its “relatively limited analysis” shows the importance of considering risks more generally and highlights the need for a more comprehensive transition risk assessment.

Regardless of the path taken towards Net Zero, the transition to decarbonise the economy would come at a cost - but the report claims a slower, orderly transition may cost less and improve future economic outcomes. And a lot of this risk could be mitigated:

“Higher short-term decarbonisation targets coupled with domestic policy certainty could assist to smooth the transition, avoid shocks, allow coordinated transition plans to be developed for the most vulnerable industries, and enable higher confidence to attract investment in emerging low emissions industries and technologies.