After 18 years of the Renewable Energy Target (RET), with the large-scale target about to be met, one might assume we no longer have to think much about the price of Large-scale Generation Certificates (LGCs) whose value should naturally trend to zero as intended by its designers. However, even now LGC trading keeps observers entertained with unexpected twists and turns.

LGC prices represent the premium required above normal electricity prices to build new renewable energy plant. As build costs change only progressively, and surplus certificates can be banked, their price should not be particularly volatile. However, this decade has seen some wild swings, most recently more than halving in late 2018. 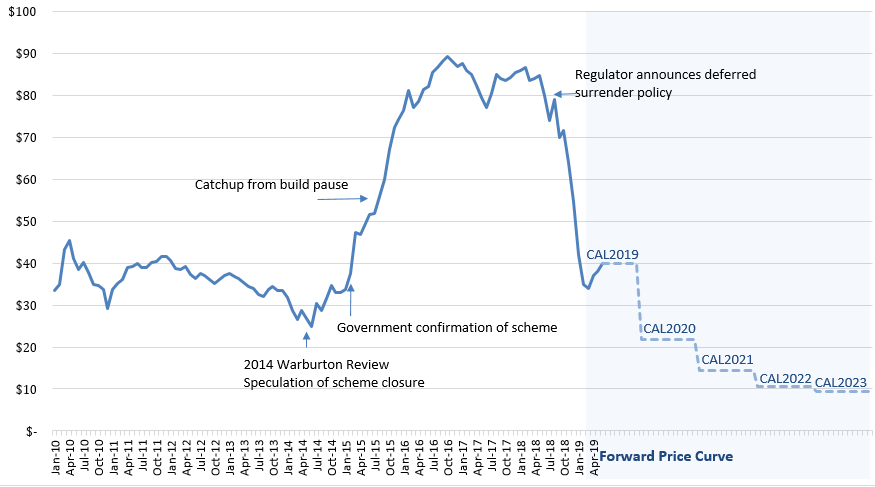 Price volatility in commodity markets is normally a healthy thing. It allows changes in supply and demand to be quickly responded to. For example, if a drought sends up the price of wheat futures, it immediately encourages rationing and extra planting. As any historian can attest, free markets are the best way to prevent famines.

However, LGCs don’t represent something physical like wheat – they have only abstract value through government regulations, so their value is, in turn, prone to political sentiment and regulatory decision. Every price change causes wealth transfers, with resultant risks, so one would hope they only happen for good reason. If price changes due to an unexpected change in government policy, it represents regulatory risk, an unnecessary dead-weight on the industry, ultimately costing consumers. LGC price history shows this has indeed happened in the RET.

The large-scale RET works through the Clean Energy Regulator (CER) setting a percentage of retailers’ energy sales that must be surrendered to it in the form of LGCs[i]. That percentage grew through the life of the scheme and levels off in 2020. LGCs are created by large-scale renewable energy generators built after 1997 plus any generation from older renewables above their historical average output (baseline).

The designers recognised that the build rate might fall behind from time to time, and so to avoid the price becoming astronomical at those times, a price capping system was included. If retailers fail to surrender more than 10 per cent of their quota in any year, they must pay the “shortfall charge”, which will be returned to them if they make good their shortfall in the next three years.

Price capping is an entirely sensible idea, but the shortfall charge had some strange features:

Neither feature seems to have a good economic rationale.

The latter arose from a perception at the time that paying the shortfall charge in lieu of surrendering LGCs would be inconsistent with the scheme’s intent and therefore improper. Hence it was to be treated similar to a non-compliance penalty, which companies may not tax-deduct. But:

Two decades on, tax complexities keep arising due to this unusual design feature.

As seen in the figure, price was fairly stable in 2011 and 2012, falling in 2013 to a trough of about $25 mid-2014. Prior to the 2013 election the then Abbott opposition had stated its intention to review the RET, which the market perceived as a risk of its abolition. This risk was priced in, with the price of LGCs falling to about half what was necessary in 2014 to fund a new renewable plant. Unsurprisingly, the build pipeline paused.

However, following the Warburton Review[ii], the government ultimately re-affirmed its commitment to the RET. Once that happened, it seemed that the build pause’s fallout meant there would be insufficient LGC creation to meet the target in a few years’ time. LGC prices switched from bust to boom, and, in turn, the build pipeline switched from pause to rush. The CER now predicts the 2020 target will be well and truly met[iii].

Whilst the government did not ultimately repeal the RET, changing perceptions triggered a bust and boom cycle which echoes today. The sudden rush back into renewables after 2015 caused numerous connection, loss factor and congestion challenges as the industry struggles with such an unprecedented build rate. These are examples of how the inefficiencies of regulatory risk manifests.

Even during the LGC shortage, it was clear that the restarted pipeline of generation projects would eventually swing LGC’s back into over-supply, and therefore the futures prices of LGCs traded at a heavy discount to current spot prices, i.e. the forward curve was in severe backwardation.

This meant it would be commercially rational for retailers to borrow LGCs from the future if they could. The price cap design appears to intend for exactly this: a retailer can surrender the shortfall charge now, which is returned (without interest) when the LGC is made up in a few years’ time. This would seem to be a sensible design, as it would smooth the market out over time and lessen boom-bust cycles. It should, in theory, limit the backwardation slope to the time value of an interest-free loan to the CER.

However in 2016 the CER held a view[iv] that such a trading strategy ran counter to the RET’s intent. It would name retailers who took this strategy in a negative manner, resulting in a likely affect to their brands. Use of it remained rare, although some retailers did pay the shortfall[v].

In October 2018 the CER reversed this position, stating that it had

“… no objections to the use of the shortfall in the expectation that clients would true up these positions with large-scale generation certificates (LGCs) in a subsequent year, as allowed for under the law.”[vi]

This acceptance by the CER of the shortfall mechanism being a commercial response to the status of the market led to a major realignment of prices, as retailers realised they could now borrow LGCs from a cheaper future without fear of negative implications to their brand[vii]. Spot LGC prices halved within a few months.

However as the $65 shortfall charge is not tax deductible when paid to the CER, this then opens more tax questions regarding the return leg in a few years’ time: the retailer will hand over a LGC and the CER will hand back $65 cash. One would expect it would be treated symmetrically, which means the $65 refund of the charge would be not be assessable to tax.

That sensible conclusion is what the market is assuming given the current level of backwardation. Indeed, an outcome that results in the refund of the shortfall charge being assessed to tax would be inconsistent with the purpose of the shortfall mechanism and lead to greater uncertainty and price volatility. However this is all new and untested ground to be broken. The ATO intends to consult with industry over the next few months before providing some clarity in these matters. Hopefully there are no further inequitable and regulatory-driven price shocks to come.

[i] Clean Energy Regulator, About the Renewable Energy Target: How the scheme works, May 2018