The Queensland state election will be held on Saturday. Based on the political pundits it is likely to be close, with One Nation potentially holding the balance of power. Energy policy has been prominent.

The focus on energy was intensified in the lead-up to the formal declaration of the state poll when the Queensland Labor Government gave electricity retailers a few days to pledge to pass on the full savings from government price relief measures or be publicly “named and shamed”. The Premier, Annastacia Palaszczuk, also restated that the government would create a state-owned retailer.

Since that time most parties have argued that their policies will bring down energy prices and ensure supply. Given this atmosphere, how do the parties’ energy policies compare? We take a look.

There was consensus between the ALP and the Liberal National Party opposition on one issue – the introduction of a third generator – although the approach to achieve it is very different. The LNP has proposed to restructure the existing generators (CS Energy and Stanwell) into three companies – six years after the Bligh Labor Government consolidated its three state-owned generators, CS Energy, Stanwell and Tarong, into the two existing businesses. The ALP is proposing to investigate the restructure of Government owned generators and the establishment of a publicly-owned CleanCo to invest in and own renewable generation and storage assets.

The clear distinction between the ALP and the LNP is their respective approaches to new generation capacity – the LNP has committed to supporting a new coal-fired power station in North Queensland, while the ALP has reaffirmed its commitment to more renewable generation. The LNP has suggested Collinsville in the LNP-held electorate of Burdekin, which has notionally become a Labor seat following a redistribution.

While the ALP has recommitted to its 50 per cent renewable energy target, the LNP has indicated it will scrap the target. Both the coal-fired power plant and state-based RET have attracted substantial commentary. There were media reports that indicated “secret” modelling showed a coal-fired power station could be viable. (More details can be found here.) And earlier this week a report[i] from the Australian Institute for Progress was released and raised the spectre of power plants closing to allow the Queensland Government’s 50 per cent target to be met.

Both major parties are committed to retaining the Solar Bonus Scheme, which is expected to cost $3 billion over the next decade. Opposition Leader, Mr Tim Nicholls, said the LNP would honour the solar contracts rather than leave taxpayers exposed to a large compensation claim[ii].

One Nation, which could potentially hold the balance of power in the new Parliament, supports the idea of a new coal-fired power station in North Queensland. It goes further than the LNP (which says it would work with a private industry) and argues that government funding should be used to develop the new plant. It has proposed scrapping funding for the $4.5 billion Cross River Rail project in Brisbane and using those funds to invest in coal-fired power[iii]. Pauline Hanson wants a new State Government to invest $1.5 billion in the power plant and for the Federal Government to provide an additional $1.5 billion. Senator Hanson insists the project be built by the State Government and says One Nation won’t support either of the major parties unless they commit to the plant[iv].

One Nation has committed to returning dividends to the state-owned power companies to push energy costs down by 20 per cent “immediately”[v].

Consistent with the Greens, One Nation does not believe there is a need for a profit to be made in energy.

The Greens, under their “Power for People” policy, are advocating that power companies be non-profit. Its document states that it would “force energy companies to stop making profits and paying massive dividends and put the $3 billion back into making our bills cheaper”. It would “scrap private retailers”. All generation would be under public or community ownership. It has nominated a 90 per cent RET by 2030, noting[vi] that it is a “slightly more conservative approach than that laid out in the Beyond Zero Emissions Report that called for 100% RET by 2020”.

A major part of Katter’s Australia Party’s energy policy is support of the Copper String project, to link the North West Minerals Province to the National Electricity Market. It also advocates the introduction of competition to regional Queensland by allowing any retailer to deliver the state subsidy currently only available to Ergon.

Table 1 below outlines key areas of each party’s energy policies: 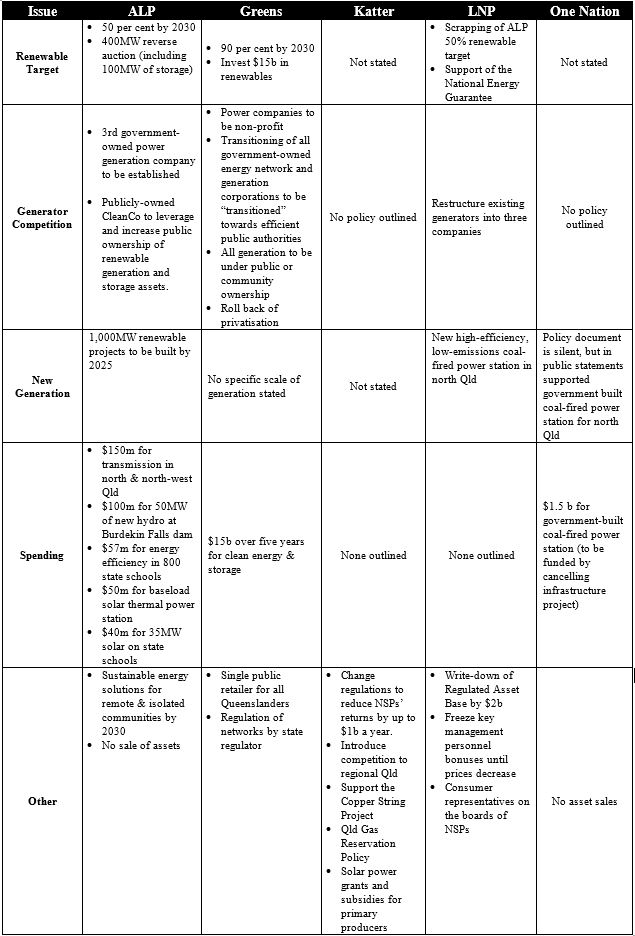 So what does the contract market say about future Queensland wholesale prices (and implicitly the industry’s view on which party will win)?  Figure 1 shows the prices for Q1 2018 $300 caps since July last year.

The major fall in prices in June this year was a result of the Queensland Government’s Powering Queensland Plan, which included directions to Stanwell Corporation to return the Swanbank E gas fired generator to service by 1 January 2018 and  “to undertake strategies to place downward pressure on wholesale prices”[vii]. Since that time prices have increased a little, but the change has been negligible, so industry is of the view that there are no major changes anticipated.

Queensland is a microcosm of the broader debate underway about the future of Australia’s energy supply. The NEM’s role is to be a longer term investment and dis-investment signal to generators - sustained high wholesale prices signal demand for new generation capacity, while sustained low wholesale prices signal oversupply and encourage marginal generation to switch off, mothball and eventually close. That role has been gazumped by political imperatives with governments and parties of all hues eager to show that they can control what happens with energy and energy prices.

At a time when COAG is grappling with implementation of a national energy policy, Queensland’s major political parties are continuing to advocate state-based approaches - policies that are likely to have implications beyond the state’s borders. For that reason, this election promises to be interesting for both the political outcome it produces and consequently the direction of Queensland’s electricity system.

[v] One Nation’s list of demands: Party preparing for balance of power,  The Australian, 29 October 2017