The Finkel Review: What about WA?

While the Finkel Review was focused on the future security of the National Electricity Market (NEM) it did also suggest that the West Australian and Northern Territory governments should consider adopting the Panel’s recommendations for their individual electricity systems.

The Finkel Review highlights the changing nature of the grid, as large-scale, fossil fuel-fired synchronous generators retire and are replaced by new and emerging generation, storage and demand management technologies. In addition, energy efficiency improvements are changing the pattern of electricity consumption, and future demand may be affected by the adoption of electric vehicles and the replacement of gas space heating with electric heating.

The key outcomes sought by the Finkel Review are:

It seeks to achieve these outcomes via the three key pillars of:

So what are some of the implications of the recommendations if applied to Western Australia’s South West Interconnected System (SWIS[i]), which delivers electricity to the majority of WA households? The West has already embarked on some market changes to bring it into closer alignment with the eastern states. In initial responses the WA Energy Minister Ben Wyatt appeared to back national solutions as the most effective emission reduction strategies[ii].

Taking a look at the supply outlook for the NEM and the SWIS, the Australian Energy Market Operator (AEMO) forecasts a potential supply shortfall in Victoria and South Australia in the NEM for the FY2018 summer. AEMO and governments are implementing a number of measures to reduce the potential for energy supply problems and the Finkel Review has recommended a third party review of AEMO’s short-term demand forecast techniques used for the FY2018 summer.

In contrast, AEMO’s 2017 Electricity Statement of Opportunities for the West Australian Wholesale Electricity Market forecasts no shortfalls, although the margin of excess capacity reduces significantly over the coming years due to the closure of the Muja AB power station units and other Synergy assets by September 2018[iii], as shown in the following table[iv].

Unlike the NEM, the WEM has a separate capacity mechanism that can be used to support new capacity. For the first few years of its operation, it did so all too well, leading to the excess capacity levels seen in the 2016/17 column above. A range of reforms have been carried out over recent years to reduce the costs of the capacity mechanism and investors will want to be confident that the revised rules will sustain for several years before committing to projects on the basis of their capacity revenues.

With increasing penetration of variable renewable electricity generators, the Finkel Review has identified that the rules and market frameworks must be revised to ensure essential security services can be sourced from a range of technologies. It is also necessary to ensure that new generators have appropriate capabilities, and the Finkel Review recommends implementing Energy Security Obligations to ensure generators have appropriate technical capabilities.

In WA, from 1 July 2018 there is an intention that the wholesale energy and ancillary service markets be reformed[v], to allow for:

However since the Public Utilities Office recommendations were published, the government has changed and their status is unclear.

If they are implemented, they would seem to address the main points of the Finkel Review’s recommendations.

The Finkel Review discussed the ability of gas-fired generation to complement variable renewable electricity generation, but identified its constraints to do so due to higher gas prices and tighter supply availability. To improve gas supply and affordability, the Finkel Review suggested gas market transparency be improved by:

In WA, there is adequate domestic supply for the foreseeable future. The state Government’s domestic gas reservation policy (15 per cent of an LNG export project’s gas, must be made available to the domestic market), has helped ensure that export projects have not unduly disrupted domestic supply, although gas reserves allocated to domestic production decline in 2023, as shown in figure 1 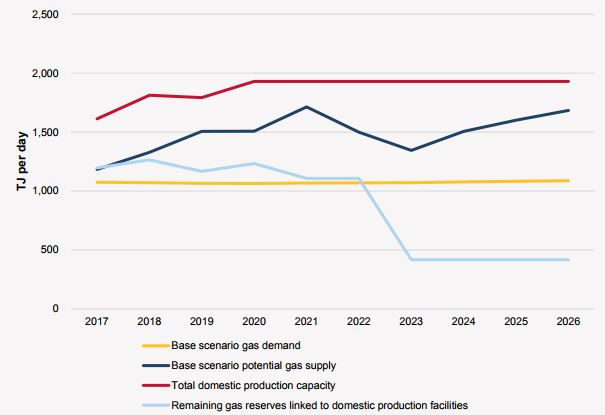 Therefore Finkel Review recommendations have little application in the West Australian context, although there is scope for transparency of gas supply contracts for gas-fired generators to occur.

The Finkel Review suggested a more strategic approach is required for the coordination of generation and transmission investment in the NEM, and recommended that there be:

AEMO took over the operation of the WA Wholesale Electricity Market in 2015 and is consulting with Western Power on these matters. Some of the considerations of Western Power include[vii]:

As WA has no interconnections with the rest of the NEM, and there is a single transmission network service provider – Western Power - for the South-West Interconnected System, some of the recommendations have limited utility. However, there is an ongoing connection “queue” of generators wanting to connect to the transmission network that Western Power is unable to keep up with. So this is an area that could potentially benefit from improved co-ordination of generation and transmission planning.

The Finkel Review recommended that consumers should have easier access to their individual data, and should be empowered to take advantage of distributed energy and demand response technologies – and rewarded accordingly for their role in improving the reliability and security of the electricity system.

WA has a large proportion of its meters that are in need of upgrading. Depending on the specification of new meters, these could facilitate easier customer access to their usage data.

At present metering is the responsibility of state-owned distribution and transmission business Western Power. The cash-strapped government may be reluctant to fund a rollout of digital meters. If so, this is an opportunity to look at alternative options.

Distributed energy technologies are already popular in WA, with the state rivalling South Australia and Queensland for take-up of rooftop PV. Retail tariffs for small customers are set directly by the government. This one-size fits-all approach may not be the best framework to encourage innovation and appropriate rewards for distributed energy resources. The new Labor Government has shown some interest in transitioning towards full retail competition over time, which could allow greater diversity of tariff offers to match the growing diversity of customer needs and wants.

To improve governance, the Finkel Review recommended that an Energy Security Board involving AEMO, the AER and the AEMC, along with two independent members, be established. It would provide a single point of responsibility and accountability, drive the implementation of the Finkel Review’s recommendations, and release an annual Health of the NEM Report.

Finally the Finkel Review recommended a policy package to achieve an orderly transition to a low emissions future for the electricity sector, thereby providing stability for investment decisions which impact system reliability. This package included:

In WA, the generation fuel type mix is shown in Figure 2 below. Of the 5,188MW of scheduled generation, 437MW (8.4%) is expected to retire by October 2018, thereby reducing the market’s surplus capacity. 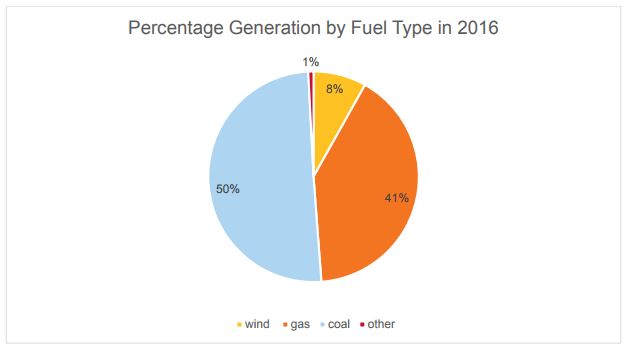 Source: AEMO, May 2017: Renewables Influence on the Generation Mix and Gas Demand in Western Australia, p. 5

According to the Clean Energy Regulator’s Designated Generation Facility Data 2015-16[viii], WA had an emissions intensity of 0.73t/MWh in 2015-16. The Federal Government is yet to agree to a CET and there has been much debate in the press regarding what the appropriate threshold should be. It has been suggested that 0.6t/MWh[ix] could be appropriate. If this were the case, 42 of the 77 reporting facilities would need to purchase offsetting certificates. It has also been reported that some WA MPs have raised concerns that there has not been consideration of how a proposed CET would impact electricity prices in the West[x].

Given the lack of interconnection to other systems, it is critical for the SWIS that the generation mix can support system security and reliability. Accordingly, the GRO may be a critically important safeguard for the SWIS as the proportion of dispatchable synchronous generation declines.

While the West Australian market differs from the NEM, there are enough similarities that the Finkel Review has relevance. Market participants in WA should be mindful of the Finkel Review’s measures being implemented, particularly the Clean Energy Target – something which may have serious ramifications for generation in the state.

[i] The SWIS wholesale market covers an area from Kalbarri in the north to Ravensthorpe and Albany in the south and as far east as Kalgoorlie. The rest of WA is supplied by Horizon Power, which is responsible for generating, distributing and selling electricity outside the SWIS.