The crowding out of coal

BP recently released the 66th Statistical Review of World Energy 2017[i] (the report). It showed that global energy consumption grew by 1 per cent, a similar rate to 2014 and 2015, and almost half the average growth rate of the past decade.

According to the report, energy growth is getting slower and demand is shifting to fast-developing economies (China and India). Global energy markets are adapting to short-term price challenges, while a longer-term transition continues.

This transition was particularly noticeable in the contrasting decelerated growth of coal and oil, and the accelerated growth of gas and renewable power. The report highlighted changes in the fuel mix, the rise of renewables, and coal’s increasing challenge as the energy market shifts, in both global and domestic markets. In Australia, we mirrored this global trend, as seen in Table 1.

The decline of coal

“The turnaround in the fortunes of coal over the past few years is stark: it is only four years ago that coal was the largest source of energy demand growth,” writes Spencer Dale, BP Group Chief Economist.

On the supply side, global coal production fell by 6.12 per cent, which to date, is the largest decline on record (Figure 1). The report suggests that coal and oil have peaked and are moving towards an ongoing decline. 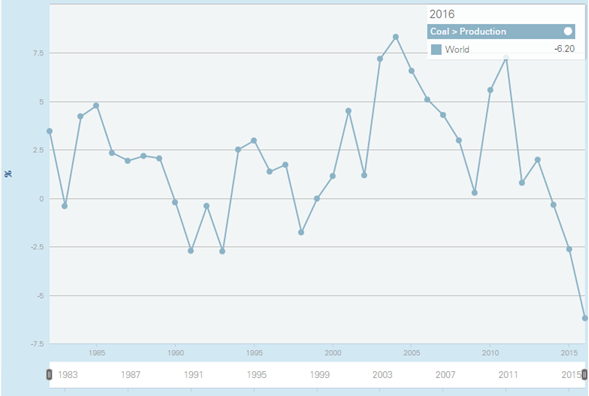 Australia followed this trend, with coal consumption falling by 0.68 per cent and production dropping by 2.4 per cent in 2016 (Table 2).

The rise of renewables

In 2016 renewable energy again grew rapidly. As Bob Dudley writes in the report: “Of course, the energy mix is shifting towards cleaner, lower carbon fuels, driven by environmental needs to grow and prosper, while also reducing carbon emissions.”

In Australia renewable consumption (except hydro) increased by 12.5 per cent, with the majority of renewable power from solar. Hydroelectric power consumption grew by 27.7 per cent.

Figure 2: Renewable (except hydro) consumption and production by region, 2016 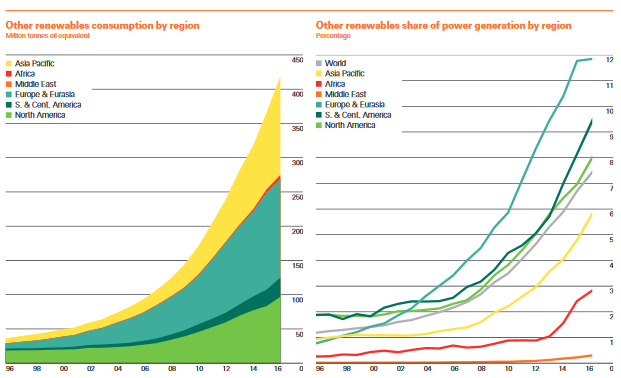 Yet despite high growth rates, renewable power represents only 8 per cent of global power generation.

The future of gas

Global natural gas consumption increased by 1.5 per cent, lower than the previous decade’s average of 2.3 per cent growth.

While global production had its weakest growth in 34 years, it is estimated that 2016 was the first year of a “growth spurt” with world liquefied natural gas (LNG) supplies expected to increase by around 30 per cent by 2020 – which, accordingly to the report, is the equivalent to a new train coming on stream every two to three months for the next four years.

While Australia’s natural gas consumption declined by over 4 per cent, the nation’s production of LNG was the global “standout performer” with a supply increase of 25.2 per cent due to new facilities coming on stream in 2016 (Figure 3). Global LNG imports/exports grew by 6.2 per cent, which was likely driven by Australia’s increased output.

With the changes in the energy mix, LNG may emerge as a growing flexible transition fuel. Spencer Dale writes in the report: “As the importance of LNG trade grows, global gas markets are likely to evolve quite materially. Alongside increasing market integration, we are likely to see a shift towards a more flexible style of trading, supported by a deeper, more competitive market structure.”

The report predicts that coal consumption has probably peaked and it is currently in steady decline (alongside oil). It shows evidence that the fight for coal may be a losing battle, with much of the future growth likely to come from natural gas and renewables. Another important driver is the extent to which electric vehicles take off – this would see oil lose share and gas and renewables (as electricity fuel sources) increase further. It also remains to be seen whether the much touted “hydrogen economy” takes off.

For the world’s power grids, a key challenge will be maintaining security and reliability of supply given the different characteristics of coal-fired power and the renewables that are predicted to be its main replacement. As Bob Dudley writes: “As we know from history, one set of challenges is likely to be replaced by another, as we learn to operate in ever-changing markets to harness the opportunities afforded by the transition to a lower carbon environment.”