The 2020 ISP: A Lonely Planet guide for transmission

On 30 July the Australian Energy Market Operator (AEMO) published its biennial Integrated System Plan (ISP), which recommended about $10 billion of interconnect projects be developed over the coming 20 years.[i]  There have been many summaries written about its 631 pages and megabytes of supporting spreadsheets, but is there something the press has overlooked? We investigate further.

What the ISP reported

According to the ISP, the Optimal Development Path is shown in the following diagram:

Figure 1: The Optimal Development Path for the National Electricity Market 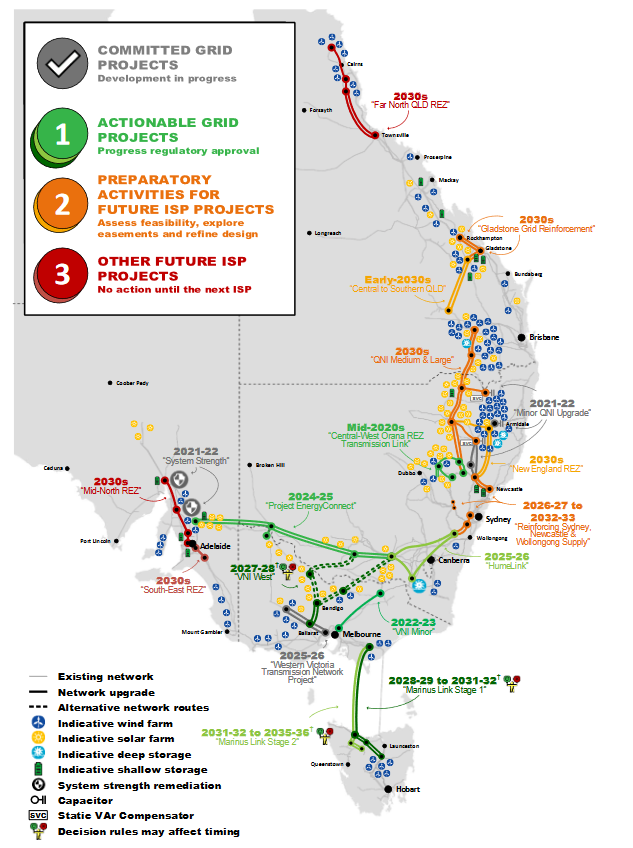 Under the Central Scenario, the additional interconnector capacity installed by 2036-37 is in the order of 6GW. In common with its predecessor, the 2018 ISP,[ii] the 2020 ISP does not present an easily accessible summary of the optimal development path’s improvement in transfer capacity (and their associated costs), so the Australian Energy Council (AEC) compiled the following table from Appendix 3:

As can be seen from the table above there is a wide range of costs for all the projects listed.  The fundamental assessment of projects’ viability is reliant on benefits exceeding costs, and when there is such a broad range, there is increased risk projects cannot be justified and, given there are dependencies between projects, subsequent projects should not be recommended either.

A prime example of the difficulty in obtaining a firm cost estimate is Project EnergyConnect.

Based on a capital cost of $1.53 billion, on 24 January the AER determined the Regulatory Investment Test for Transmission (RIT-T) for the project was satisfied.  The ISP has modelled the cost at $1.99 billion (more than 30 per cent higher) and ElectraNet has announced that updated cost estimates will be available by September.[iii]

AEMO is to be applauded for the significant consultation it conducted in the development of the 2020 ISP.  However, the breadth of material to review and the time commitment needed to participate in the process and scrutinise the inputs, assumptions, specialist reports and draft findings may well have deterred all but larger market participants from contributing to the debate.

This suggests the Australian Energy Regulator (AER), which is already involved in the scrutiny of the ISP via its Guidelines to make the Integrated System Plan actionable,[iv] and also the RIT-T Application Guidelines,[v] should become involved in the review of the ISP prior to publication to ensure:

The AEC suggests that the AER is the best body to consider these issues.

Conclusions based on weighting scenarios and sensitivities

The AEC has been critical in the past of scenario weightings unreasonably skewing conclusions,[vii] since extraordinarily high (or low) scenario outcomes can, even with small weightings, have a disproportionate effect on the choice of the best development path.

While it’s common practice in analysis to include sensitivities to show how quickly results would change if a single, key assumption changed, the sensitivities included in the ISP have been treated as scenarios, with their combined weighting being 40 per cent in the derivation of the weighted nett market benefits.

In order to determine what transmission is justifiable, the ISP must model a least-cost generation future and, as a result of the planned closure of older power stations, the ISP identifies a need for as much as 11.8GW of new dispatchable capacity by 2039-40.[viii]  A lack of new coal and combined-cycle technology was to be expected in a high renewable energy future.  What was particularly surprising was that none of the generation scenarios included new peaking gas-fired technology.

This modelling result comes about mainly due to a competition between the price of new gas-fired peaking plants versus the cost of storage, in particular what the ISP describes as “shallow” battery storage; that which can hold 4 hours of energy, i.e. enough to cover an evening peak when the sun goes down.  AEMO consulted heavily on input costs and received very optimistic views on the present and future cost of batteries.[ix]  AEMO explains how these compete with gas in the following simplified chart. 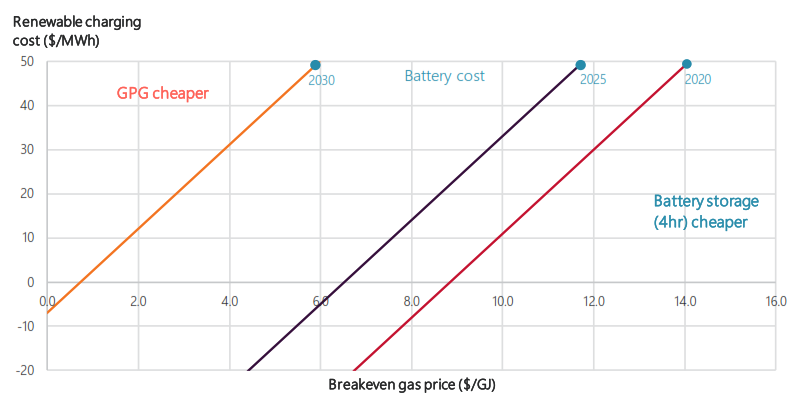 This suggests that if you can store zero price surplus renewable energy, it is already cheaper to invest in a battery to meet a 4 hour peak than to build a peaking gas plant fuelled by $9/GJ gas – which is not far above today’s gas prices.  And, by 2030, battery storage will be cheaper at any price of gas.

This is a surprising claim and seems at odds with the current market that is still investing in peaking gas.[xi]  The ISP’s results depend entirely on the quality of the input data and, whilst these inputs were openly consulted, the outcome of that consultation still needs to remain grounded in defensible observation rather than aspiration.

Note that despite these optimistic views on storage, the ISP models the NEM’s existing large gas fleet to remain largely in place through the scenarios’ planning period, and actually increases its generation compared to today (See figure 3).

Figure 3: Projected GPG Generation across a range of reference years 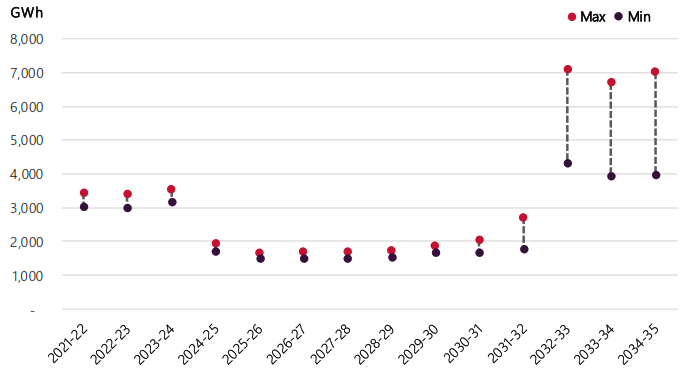 In the end, however, modelling of the forms of dispatchable capacity is just that – a model.  It will be up to market investors, paying real costs for technologies, to decide what is truly the best way to supply customers during lulls in renewable energy, and the death of new gas peakers may yet be greatly exaggerated.

The AER is currently consulting on Guidelines to make the Integrated System Plan actionable, and published its draft decision on 15 May.[xiii]  The guidelines set out the cost benefit analysis and forecasting best practices which AEMO should conduct when developing the ISP, as well as how projects identified in the ISP may expedite their assessment under the RIT-T.

The AEC is supportive of streamlining assessment processes by removing duplication and unnecessary steps, but, as previously expressed,[xiv] it is important that rigorous assessment of nett benefits be continued by the AER, to ensure that the likely market benefits outweigh the cost to consumers.  It is also essential that a fair playing field exists between new generation and regulated transmission, for the confidence of market investors, whose returns may be otherwise impaired.

The 2020 ISP is a monumental work by AEMO, and is important for setting out a likely (but not guaranteed) version of the market and transmission in the future.  It is essential that readers regard the document as a guide, and support the AER in ensuring that the economics of individual projects are assessed rigorously.

[ix] The final CSIRO Generation Cost report is here: https://aemo.com.au/energy-systems/electricity/national-electricity-market-nem/nem-forecasting-and-planning/scenarios-inputs-assumptions-methodologies-and-guidelines#workbook-archive. The direct link to the report is:  https://publications.csiro.au/publications/#publication/PIcsiro:EP201952/