Tasmania: When it doesn't rain, it pours

A coincidence of events in Tasmania, with low rainfall causing low dam water storage levels resulting in decreased electricity generation from hydroelectricity and a fault in the Basslink interconnector, has led to wholesale prices surpassing $100 per megawatt hour ($/MWh) for the first time in over five years. The circumstances have also raised questions about the security of supply in the state. Below we take a look at the factors involved and the measures underway in response to the reduced supply.

Tasmania experienced the eighth-driest year on record in 2015, partly due to the strong El Niño, according to the Bureau of Meteorology (BOM). The Tasmanian Energy Minister, Matthew Groom, has confirmed that water storage levels are projected to reach a low of about 14 per cent, assuming long-term average rainfall, towards the end of March or in early April 2016[i]. Dam storage levels are currently at 20 per cent.

Hydroelectricity accounts for 74 per cent of Tasmania’s generation capacity, generating 87 per cent of Tasmania's electricity in 2013-14, according to the Electricity Gas Australia publication statistics[ii]. Based on the BOM’s annual summary the second half of 2013 was very wet, in contrast to 2015, when generation from hydro decreased due to the low rainfall as shown in Figure 1 below. 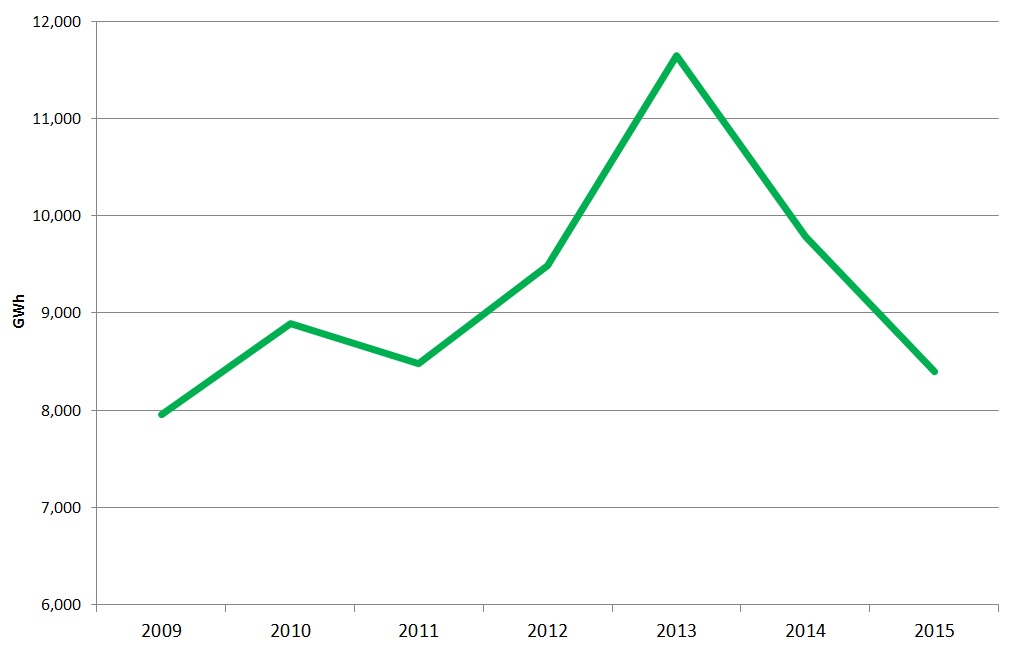 The introduction of the Federal Government’s carbon tax and high dam levels contributed to a significant increase in hydro output in 2012 and 2013. The abolition of carbon pricing on 1 July 2014 removed the additional incentive for low emissions generation that the market had seen since 1 July 2012 and has reduced the profitability of future hydro generation. Combined with that, the recent below average rainfalls have resulted in the lowest level of hydro generation since the 2008-09 droughts.

The Basslink interconnector fault in the undersea power cable experienced on 20 December 2015 was detected about 100 kilometres off the Tasmanian coast and at a depth of about 80 metres. At the time of writing the cause of the fault was still being investigated. The importance of the interconnector is underlined by the fact that during late 2015, Tasmania had been importing about 40 per cent of the state's electricity needs from Victoria because of the low water storage levels in the state[iv].

Restoration of Basslink is expected to take up to nine weeks to complete, which would see it fully operational by the 19 March 2016[v]. 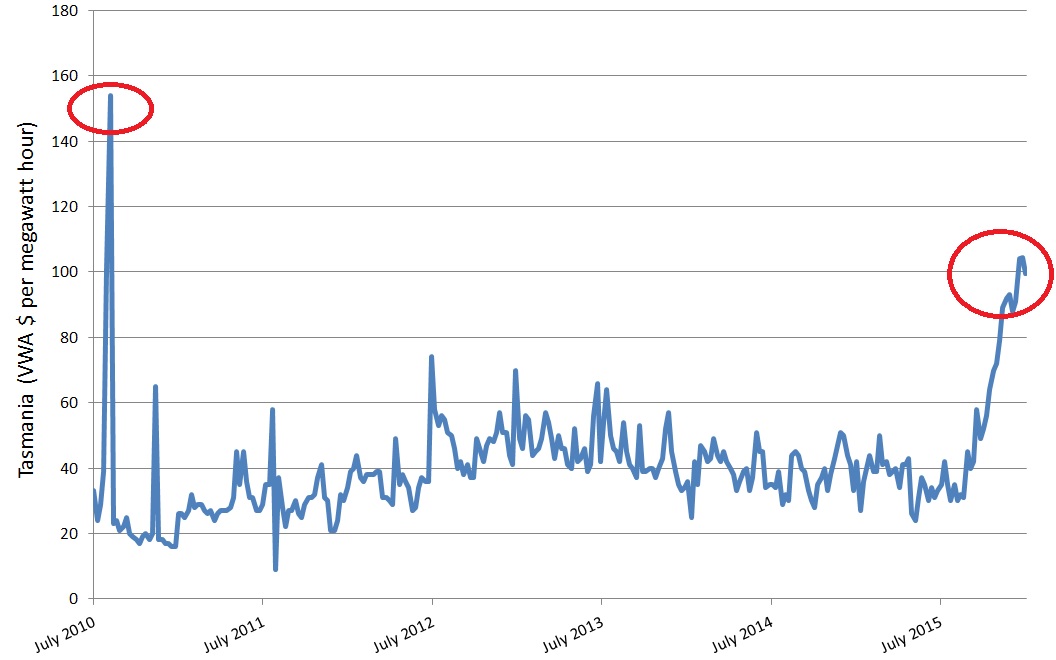 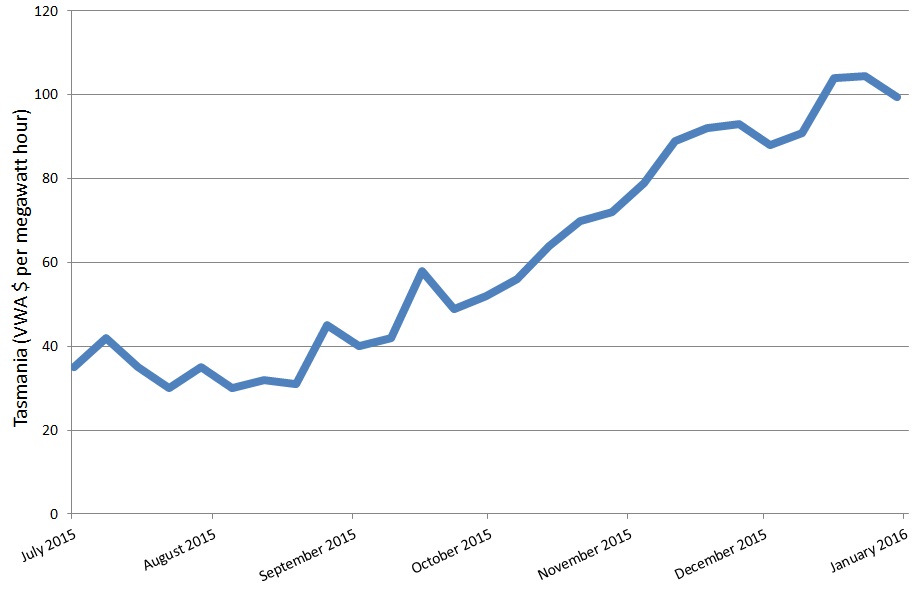 It is important to note that under the Tasmanian wholesale contract regulatory framework, the Tasmanian Economic Regulator regulates electricity contracts that Hydro Tasmania has been required to offer for sale to other electricity market participants since 1 January 2014.

From 20 September 2015 to the end of December last year the weekly VWP has increased consistently. The higher than average prices have occurred because of scarce supply as a result of the low rainfall and interconnector issues.

After the driest September to November period on record in 2015, Hydro Tasmania announced the restart of the combined cycle gas turbine at the Tamar Valley Power Station. The CCGT was recommissioned on 20 January 2016. The unit had not generated power for more than 18 months[viii] and had been earmarked for sale. Hydro Tasmania had not used the CCGT while there was ample hydro generation and imports from Victoria were cheaper.[ix]

The CCGT remains a commercially sensible addition in the short-term to the Tasmanian energy supply mix. The sale of the unit is currently off the table with the State Government withdrawing its previous approval following the failure of Basslink. The future of the unit will now be reviewed[x].

Despite the current situation, the State Government and Hydro Tasmania have indicated that under normal operating circumstances, there is enough energy to meet Tasmanian demand through the combination of future hydropower inflows, wind generation and the import capacity of Basslink, which is expected to come back to full capacity by late March 2016.

Tasmania has diversified its energy mix with the inclusion of wind in addition to gas and hydro energy. Currently there is 308 MW of large-scale wind connected. This could increase in coming years with over 700 MW of proposed wind capacity[xi] from a range of private developers.

Jun 02 2022
Read Analysis
GET IN TOUCH
Do you have a question or comment for AEC?