Wholesale electricity markets are highly complex and government-led market interventions have substantial consequences when aggregated across the National Electricity Market (NEM). The transition to a lower emissions economy is not costless, and the costs and benefits should be clearly articulated to consumers who will be required to support the cost of the various government renewable and environmentally-friendly schemes. This article examines options to better manage energy markets with high levels of intermittent generation.

Reverse auctions are rising in popularity as a tool to deliver government programs and reverse auctions were used by the ACT Government for its renewable energy scheme[i]. In September 2016, Intelligent Energy Systems (IES) released findings of modelling of a 50 per cent renewable energy target by 2030 achieved with reverse auctions[ii]. They found that a NEM-wide target achieves greater benefits than local policies by taking advantage of a wider diversity of renewable energy resources. The results also show that dispatchable generation plays an essential role in meeting demand when wind and solar are not available. The findings echo those made by the Climate Change Authority that state-based target policies will assist Australia to meet its emissions reduction objectives, but could also result in uneven investment incentives across jurisdictions, increasing the overall cost of meeting those objectives[iii].

The IES results show that in 2030 the target would be met by new wind turbines and large photovoltaic (PV) installations (Figure 1). The 50 per cent target scenario was estimated to reduce NEM emissions by 41 per cent when compared to 2005 levels. 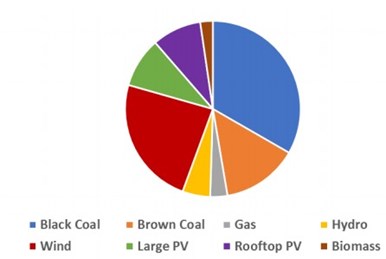 The IES modelling results show that wholesale prices rise in the short term to 2022, then decline to 2030. The contract for difference payments levied on consumers mean that most of this benefit is repaid through the renewable energy scheme. Figure 2 shows the changes to retail prices under the renewable energy target, where contract-for-difference payments are incorporated into consumers’ retail bills.

Figure 2: Retail price impacts by region (curtailment costs are not passed through) 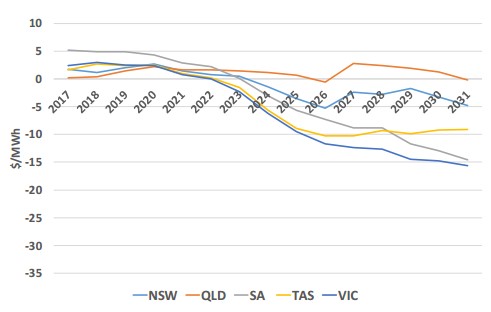 The estimated benefits of the transformation are somewhat offset by the costs. The direct costs of the contract for difference payments are included in the chart above, but other costs were not included such as curtailment costs or the cost of additional ancillary services. IES found that during the middle of the day there was surplus energy generated and wholesale prices were very low (averaging $5 MWh), resulting in curtailment of wind and solar generation. In 2030 the estimated curtailment was over 20 TWh or around 11 per cent of total generation[iv]. The lost revenue to renewables as a result of curtailment was calculated to be $1.8 billion in 2031. Once curtailment costs are incorporated into retail prices, consumers would be worse off under the target scenario in NSW and Queensland.

The results show that this policy does not achieve efficient emissions abatement. A subdued demand outlook meant that black coal generators may be retired from service before brown coal generators, which is counter to the objective of increasing renewables to reduce emissions. IES conclude that the 50 per cent renewable target is unlikely to be sending the most efficient carbon abatement signal to the market. The IES analysis did not consider power system security or reliability or the long term viability of the wholesale market under policy uncertainty, but others have considered these issues.

As discussed in the IES analysis, curtailment of intermittent generation can add to the cost of producing electricity. Lower utilisation of capital-intensive conventional generators increases their average cost. And intermittent renewable generators grounding production or switching down during low demand lowers their utilisation. Both of these effects lower the capital productivity of energy generation.

The EPIA find that as conventional generation is displaced, the need for support services provided by these generators increases. Solar and wind generators do not currently provide ancillary services to AEMO. However, AEMO is investigating ways in which additional infrastructure added to wind facilities might assist with these services in the future[vii]. The scale-up of intermittent generation can diminish the system strength of parts of the power system as synchronous generators leave the system. For example, in Tasmania new wind farms have installed synchronous condensers to strengthen their connection with the network. The EPIA believe that this can also magnify the short and long-term risk of investing in non-renewable generation assets and the power grid itself.

One option investigated with analysis from Australia’s NEM is reforming the market price cap (or maximum wholesale price allowed). Most of the time, the least-cost dispatch process in place in Australia’s electricity markets mean that generators receive the price to cover their short run marginal costs. Energy-only markets experience high price volatility because short periods of extreme prices are necessary for generators to recover their fixed costs over the long term. A maximum price cap is set to protect energy consumers from very extreme prices. Research has shown that under a scenario of 100 per cent renewable energy, the market price cap of the NEM may need to rise to between $60,000 and $80,000 MWh[viii]. The price cap (maximum price) is currently set under $14,000 MWh. Figure 3 shows that a high share of intermittent generation lowers price received for a large proportion of time in a year. But for a small share of time each year, the maximum price increases when renewables are not producing. 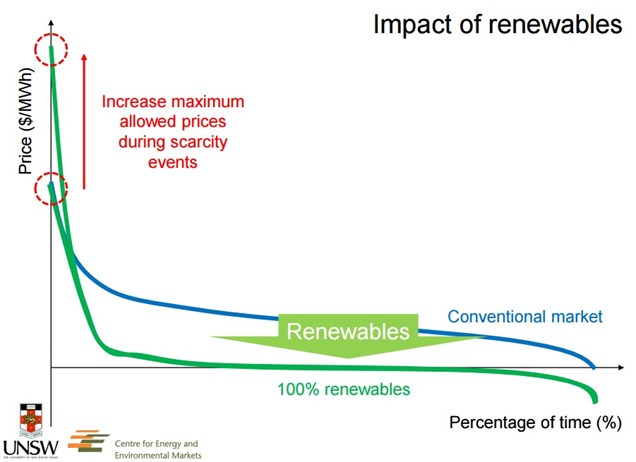 An increase to the market price cap would have the benefit of ensuring revenue earned at high price periods signals a need for new investment. Higher price caps may ensure new generation enters the market when it is needed. However, the higher maximum price would likely lead retailers to rely more heavily on contracts to hedge their risk in the market, increasing the average price of futures contracts.

The IES, EPIA as well as ongoing work by AEMO show that Australia can achieve a high renewable energy target however, the full cost of the transition is likely to be more than the cost of the technology itself. The impact of intermittent renewables on power system security and costs varies with the characteristics of the power system, the flexibility of generation, the level of complementary interconnection and the regulatory requirements governing the market.