Federal and State governments have set their sights on grid level energy storage to address system reliability and smooth the integration of intermittent renewables.

South Australia’s recently released state energy plan to address its reliability issues included a proposal to build ‘Australia’s largest battery’[i], while across the border the Victorian Government announced earlier in the year its ambition to build ‘Australia’s largest battery’.[ii] Meanwhile, Tasmania is already advanced in trialling storage systems as part of its King Island Renewable Integration Project (KIREIP) and for years pumped hydro storage has been in place at three sites in Australia. The Federal Government (championed by the Prime Minister Malcolm Turnbull) has advocated the introduction of more pumped hydro storage to assist the integration of renewables in the National Electricity Market (NEM) and declared, “We are making energy storage infrastructure a critical priority to ensure better integration of wind and solar into the energy market and more efficient use of conventional power” [iii].

The Federal Government is looking at the feasibility of up to 2000 MW of pumped storage. In South Australia, the Premier, Jay Weatherill, said the state was targeting its battery to be at least 100 MW. The tender process was initiated after the announcement. The Premier noted that there need not be one winner and flagged that that three different companies could provide 50 MW each. Victoria has proposed two 20 MW batteries to provide up to 100 MWh of power. Merit criteria and guidelines for applicants were available on 1 May[iv].

The store of options

So what different types of storage are out there and what are their characteristics?

When assessing storage options there are a number of considerations, including:

Aside from these there are groups also seeking to develop hydrogen fuel cells. Figure 1 below shows the installed capacity of different battery types in the power sector: 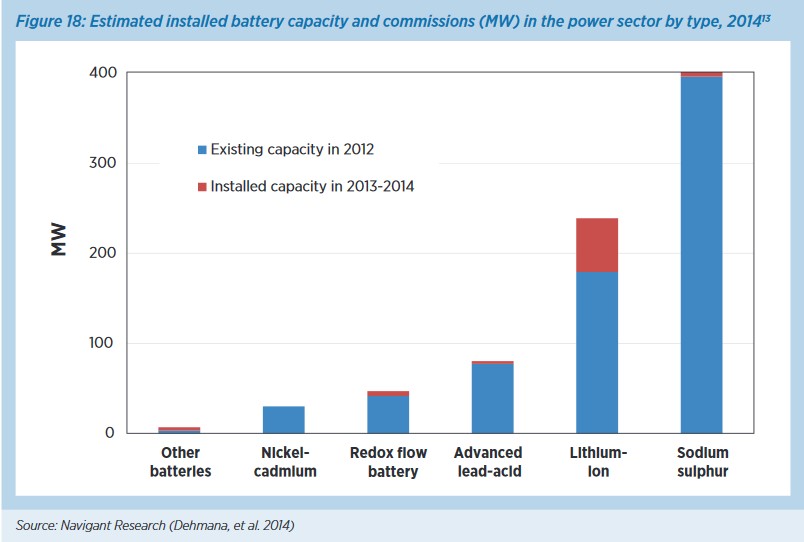 Snowy Hydro is working with the Australian Renewable Energy Agency (ARENA) on a feasibility study into several sites that could support new large-scale storage, which has the support of the Federal Government[ix]. Snowy Mountains Engineering Corporation Australia (SMEC) has been appointed as the lead consultant engineer for the feasibility study. This work will first consider existing proposals, many of which of existed since the 1960s[x]. In Tasmania, there are plans to assess several pumped hydro schemes with a total of 2500 MW of storage capacity[xi]. There is also work underway by an Energy Australia - led consortium to investigate a 100 MW pumped hydro project in South Australia that would use seawater from the Spencer Gulf[xii].  Backed by a $450,000 grant from the ARENA, the ANU is mapping hundreds of potential short-term off-river pumped hydro energy storage (STORES) sites along the east coast from North Queensland to South Australia and Tasmania. In Queensland, Genex power is developing pumped hydro in an abandoned mine in conjunction with a large scale solar project.

Who is bidding to build the SA battery?

South Australia’s $150 million Renewable Technology Fund has reportedly attracted 20 syndicates[xiii]. Three days before the plan was even announced, Tesla CEO, Elon Musk made public his promise that he could fix the state’s energy crisis by installing 100 MW of battery storage in 100 days or it would be free.[xiv] Other firms known to be vying for the contract are:

Interestingly, South Australian company 1414 Degrees (named for the melting point of silicone) is working on ramping up a trial 250 kW heat exchanger silicone battery to a grid level application, but submitted only a non-conforming bid to the SA Government.[xv] This form of battery takes advantage of the thermal storage potential of silicone. It is similar technology to molten salt in solar thermal plants.

Storage is also attracting greater focus from ARENA in its latest investment plan. Under its objective of delivering secure and reliable electricity ARENA has nominated energy storage as one of the things it is looking for. The following table shows some examples of what it is considering to develop flexible capacity and grid stability:

Funding rounds are expected to be announced on ARENA’s website in June.

Tesla is one of the most prominent of potential battery suppliers, thanks in large part to its effective marketing as well as its development of a “Gigafactory” to manufacture batteries. Telsa CEO, Elon Musk has grand visions for how battery technology will change the world. At the launch of the Powerwall and Powerpack in 2015, Musk claimed that $160 million Powerpacks would be enough to transition the United States to sustainable energy. The American think tank, the Breakthrough Institute disputes these numbers, pointing out that this 16 terawatt hours of storage would only be able to back up the grid for 34 hours based on average demand. Heatwave or cold snap conditions would reduce this time.[xvi]

In the case of the South Australian battery plan, presumably Tesla would be planning to install a series of their Powerpack batteries, which is their product for business and utility scale storage. Each of these Powerpacks has a storage capacity of 50 kW/210 kWh. If the entire 100 MW bid was fulfilled with these batteries, it would mean 2000 would be needed. Tesla batteries use lithium ion chemistry.

What will it cost?

While battery costs have been falling, the further development of large-scale storage will be dependent on it being cost competitive and efficient. The current projects and proposals will be important in that context.