The Australian Energy Market Operator has flagged the need to update technologies within Western Australia’s power grid as well as make market changes on the back of the rapid uptake of solar PV and distributed energy resources (DER) generally.

The market operator has pointed to a looming risk to supply security for the SWIS. That risk arises because at 700MW of minimal operational demand the voltage in the South West Interconnected System (SWIS) cannot be kept within technical limits and the state is expected to hit that demand level in three to five years.

The SWIS has seen rapid growth of both utility-scale renewable generation and distributed energy resources and there is now more than 1000MW of rooftop solar behind the meter which is driving down operational demand in WA’s wholesale electricity market (WEM).

Rooftop solar is now the biggest source of electricity in the SWIS and it is expected to more than double by mid-2028 to 2400MW[ii]. As at November 2018, 26 per cent of WA homes had solar on the roof, and, according to the Clean Energy Regulator, it has four of the top 10 post codes for solar PV. AEMO forecast rooftop solar to increase a further 477MW by 2021.  Figure 1 shows the accelerating growth in rooftop solar installations in WA. 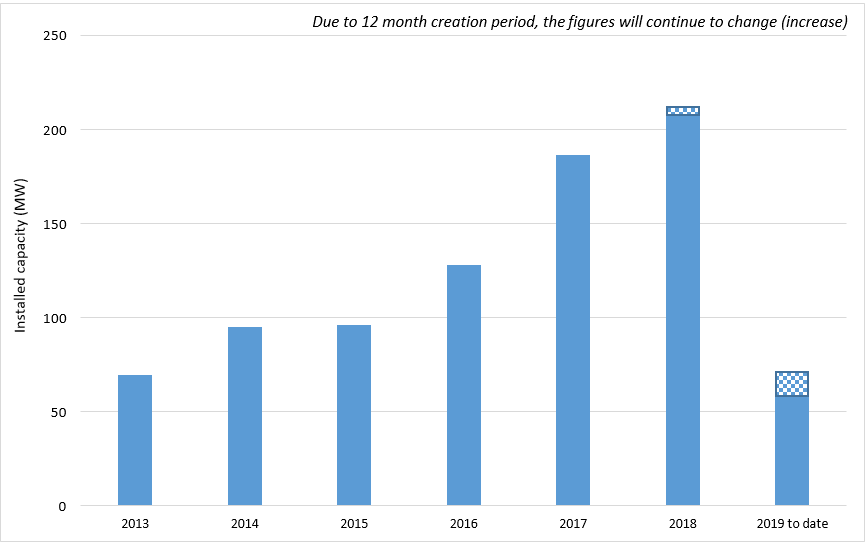 WA has more than 300 days of sunshine, which is higher than Queensland. According to data from the Bureau of Meteorology, Perth is the sunniest state capital with a long-term annual average of 8.8 hours of sunshine a day. It supports shorter payback period for solar PV than most other capitals. This, along with increased electricity costs and the dramatic drop in prices for solar systems, has helped encourage more households and business to turn to solar. Installations are expected to continue to grow substantially.

Furthermore, forecast increases to contestable tariffs[iv]  will likely see more commercial consumers looking at their alternatives. The expected increase in rooftop solar, as well as other renewable generation sources in the SWIS in the three years to 2021 is shown in the table below.

Table 1: Expected increase in solar rooftop solar PV and renewable generation in the SWIS between 2018 and 2021

The existing scale of rooftop PV can already meet nearly half of the instantaneous demand in the SWIS at low demand periods, and because it sits behind the meter, it is not currently visible or controllable by the market operator.

According to AEMO: “Analysis of some recent power system incidents in the National Electricity Market (NEM) has found evidence that significant amounts of DER (as much as 40% of distributed PV generation in a region) can disconnect or cease operation for a period of minutes following large power system disturbances”.

Therefore, it is important to consider the changes to the system demand curve brought about by DER, together with the expected effects of changes in the wholesale market generation mix.  Table 1 forecasts an additional 790MW of large-scale intermittent soon to be connected to the wholesale market, which will be expected to displace dispatchable thermal generation that provides system security services such as inertia, frequency control, and voltage control.  The coupling of these two issues leaves AEMO grappling with how to manage the resulting system security risks.

High concentrations of solar PV in grids can lead to the hollowing out of demand in the middle of the day (the so-called duck curve effect) and becomes more pronounced during mild sunny days. This, AEMO notes, has changed considerably in the past five years in WA and before 2016, the duck curve effect was “not observable during the minimum demand day. Since then the minimum annual demand has occurred during daytime”.

The frequency of these incidents is expected to increase and AEMO has graphed the shape of the load curve on the minimum demand day for 2018 and projected it out for the following years to 2028 (see figure 2).

Figure 2: AEMO’s analysis on the shape of the load curve on the minimum demand day, 2018 actuals forecast to 2028, based on ESOO PV forecasts 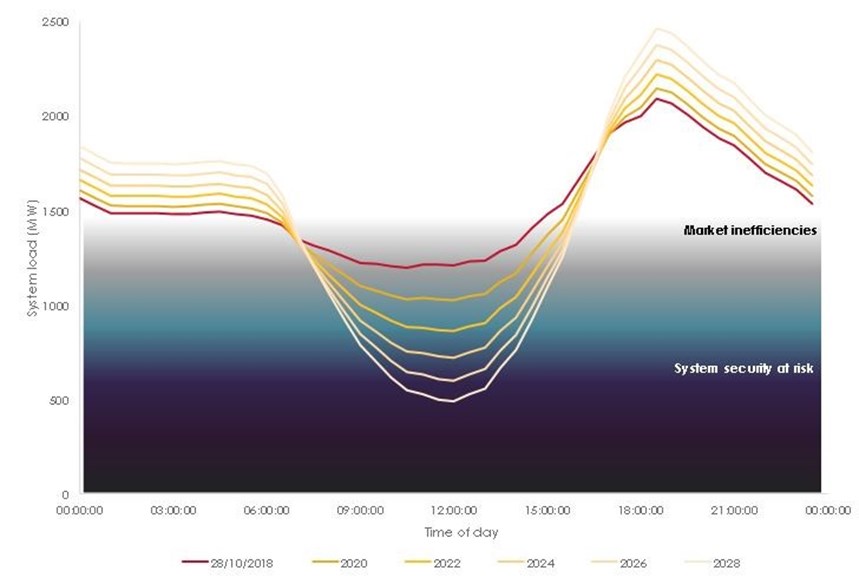 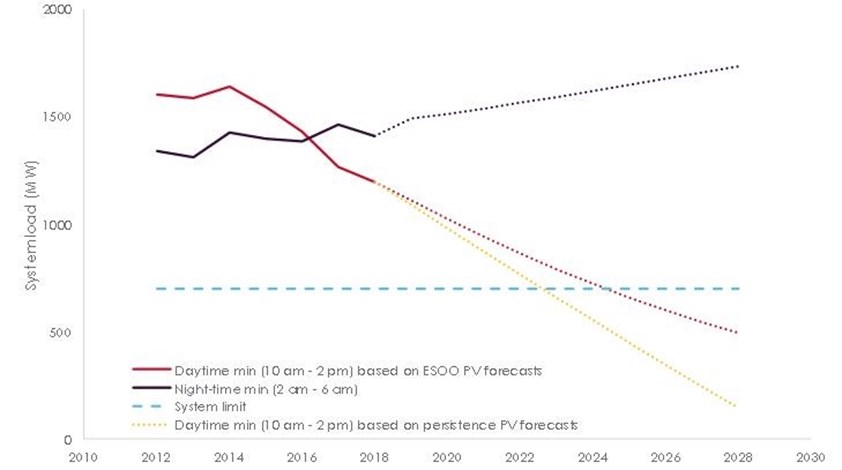 With the SWIS not interconnected with the NEM it cannot draw on other supply to stabilise its load at times of high DER output and low demand. The issues facing WA’s “islanded” grid are similar to those already experienced in South Australia particularly with the rapid increase in wind generation. By 2016, according to Electricity Gas Australia, most of the renewables built under the Renewable Energy Target were wind farms and more than 40 per cent of that capacity was built in SA because of its good wind resources and a supportive state government. It also was the biggest rooftop solar PV state per capita. This shifted the way baseload generators operated and ultimately lead to the development of South Australia’s Energy Plan with the introduction of the big battery, and changes to operating procedures for renewable generators.

The market operator believes new technology needs to be incentivised (such as synchronous condensers, energy storage systems and improved inverter capabilities) to better manage the grid and better integrate renewables into the system.

AEMO can be expected to incur additional costs in dealing with the operational complexities thrown up by increases in DER and its report calls for additional scoping of the objectives and timelines of the WA reform program to include mechanisms for DER integration. Higher system management costs will ultimately be borne by market participants and their customers.

AEMO has flagged the need for changes to better support the integration of renewables to be in place “no later than Q4 2020”. It has made seven recommendations to integrate DER and utility-scale renewables in the SWIS which are:

The taskforce in essence has been formed in response to the issues described above, and is tasked with delivering key outcomes within a tight two-year timeframe, including:

1. A fit for purpose regulatory environment that will encapsulate co-optimised dispatch, a constrained access framework and a re-think on ancillary services provision (now to be called Essential Security Services)

2. Whole of system plan akin to the Integrated System Plan (ISP) in the NEM which will undertake scenario assessments to inform regulatory reform and planning

3. DER Roadmap to ensure effective integration of DER assets into planning and operations. This may result in Western Australia leading the way on adopting new standards for DER connections.

The strategy will improve network connection and electricity market arrangements to cater for the growth of renewable energy into the future.  Government has emphasised, ‘this is not a review of existing reform’.  Rather it appears to be an attempt to accelerate delivery of key reforms necessary to deliver a stable electricity system at least cost.

Given the reform agenda and increasing complexity to manage the system is likely to lead to AEMO fee increases, it may also require careful consideration of how AEMO’s costs are recovered from market participants in the future. It may be that the causer pays principle could be worthwhile considering given WA already has relatively high fees compared to the National Electricity Market. The NEM has a different fee allocation method.

It is worthwhile reflecting that a considerable amount of effort and money has and is being expended to integrate a rapid increase in DER not just in the SWIS, but also in the NEM.  The rapid uptake of DER is in part being driven by such things as inefficient retail tariffs (volumetric tariffs cause over-compensation of DER for avoided energy purchases), and the elevated price of feed-in tariffs (the WA REBS rate is significantly higher compared with wholesale energy prices in the Balancing market).  Whilst DER is expected to have a place in the energy mix, is it time to question whether there is a need to reform the policies that over-reward DER in the pursuit of the lowest cost, low carbon and stable electricity system.

[i] Integrating Utility-scale Renewables and Distributed Energy Resources in the SWIS, AEMO 2019

[iii]  Solar PV system owners have up to 12 months to report their data to the Clean Energy Regulator, so the reported data for the most recent months is likely to understate installed capacity.

[iv] (Synergy’s L3 tariff for business customers consuming more than 50MWh p.a. is budgeted at an 8.1 per cent annual increase over the foreword estimated period)