Switching on to gas competition

Competition in retail gas markets continues to evolve where different price deals allow customers to compare and choose the right plan to meet their consumption and energy management.

The number of customers switching their retailer is one of the measures used to examine the effectiveness of competition in each state. The competition has further intensified with new retail gas market entrants in New South Wales in 2015 (Dodo and Red Energy) as well as in Western Australia (Origin and AGL) in 2017.

The Australian Energy Market Operator’s (AEMO) latest September data on gas customers switching retailers, shows that the removal of gas price regulation in New South Wales since 1 July 2017, did not influence customer retail choices because customers had already switched from a regulated retail price to a market price[i]. 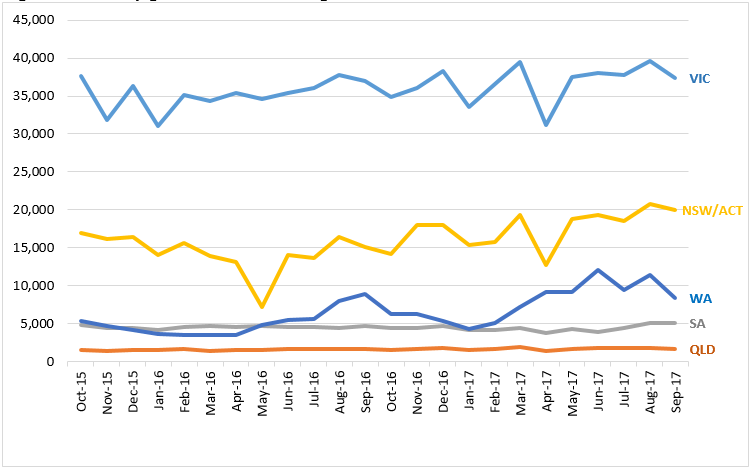 Prior to the gas price deregulation on 1 July 2017, gas retailers were required to offer regulated prices, which were agreed with the Independent Pricing and Regulatory Tribunal. This regulated price plan is not a cap and it does not prevent gas prices from increasing when the cost of gas rises. This also may not be the lowest price on offer in the market. When retail gas prices in NSW were deregulated, the only impact was on households and businesses who were on contracts with regulated gas prices.

Retail gas price deregulation does not change how customers look for a better deal since the retailers have already offered market prices to customers along with the regulated price offer. According to the NSW Government website, more than 80 per cent of households and small businesses had already switched from a regulated retail price to a market price before the retail gas price deregulation was announced[ii].

As can be seen in Figure 2, in NSW/ACT customer gas transfers show a monthly fluctuation between 0.8 and 1.3 per cent. Since energy retailers can set their own prices for gas, this means retailers are competing for customers, and customers can shop around more regularly and have greater control over their gas bill. 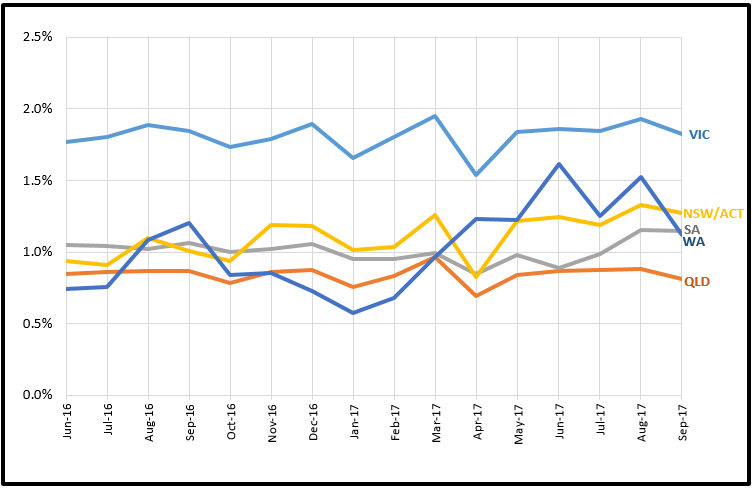 Queensland has the least gas customers opting for new retailers. The switching rate over the past 16 months among small gas customers remained steady in the state at around 0.9 per cent. Competition is narrowed where only two gas retailers are competing for customers due to the state’s relatively small size compared to other states. The market increased to 195,927 gas connections during financial year 2015-16, and new connections continue to register with the AEMO gas market system with an average of 619 connections per month.

SA has five gas retailers competing for around 440,000 customers. The gas switching rate in SA is generally higher compared to Queensland ranging between 0.9 and 1.2 per cent each month. An average of 564 of connections are registered with the AEMO gas system per month.

Victoria not only has the greatest number of gas connections, it also has the highest percentage of customers switching retailers per month, fluctuating between 1.7 and 1.9 per cent. Across the market, strong signs of independent rivalry between retailers exist in Victoria’s retail gas market where 11 retailers are competing for around two million customers.

Western Australia is the third largest state of gas connections, with a record of 734,345 of gas connections in 2015/16. The monthly switching rate in this state fluctuated highly and fell to 0.6 per cent in January 2017. Since then, the rate has been on a clear upward trend. As in Table 1, WA’s customer transfers had the largest increase compared to the same period of the previous year. As of September 2017, 12 percent of gas users have changed their retailer in the past 12 months, while a total of 8 per cent was recorded in the previous 12 months as of October 2016.

While WA’s gas market has been fully contestable since 2004[iii], Alinta Energy was the state’s only residential and small business gas retailer for many years. In 2013, Kleenheat entered the market. Over four years Kleenheat has increased its customer base, with recent media reports claiming the company now has up to a 25 per cent market share (180,000 customers)[iv]. The entrance of retailers Origin and AGL has intensified competition, and natural gas customers in the south west of the state now have twice as many retailers to choose from. In response to the announcement made by AGL at the end of 2016 that it would enter the WA gas market, the existing retailers increased their marketing and have offered a variety of new customer price specials and incentives.

The increase in market players and retail competition has ultimately provided more choice to the customer, and may have resulted in the fluctuations and increase of customers switching their gas retailer.

This data shows that where there is competition, a diversity of retail offers, and where the difference between standing and market offers grow - the number of customers shopping around for a better deal is more substantial.

When there is a greater variation in retail prices and dispersion, as a function of retailers competing more intensely for customers, the market is more effective[vi]. This is because increasingly different retail tariff plans are offered to meet customer needs, and therefore retailers more effectively target different customer preferences.

Where competition is effective there will generally be low barriers to retailers entering, expanding in or exiting the market[vii]. This places competitive pressures on existing retailers to charge prices that reflect efficient costs and improve their offers.

Mar 10 2022
Read Analysis
GET IN TOUCH
Do you have a question or comment for AEC?