The global shift from petroleum-fuelled to electric vehicles (EVs) has flagged an “urgency” in finding ways to reuse or recycle retired EV batteries[i].

BloombergNEF (BNEF) data shows that globally, the number of retired EV batteries is forecast to exceed 3.4 million packs by 2025, compared to around 55,000 in 2018. In August last year, China - where around half of all the world’s EVs are now sold - implemented a new rule to make carmakers liable for expired batteries amid increasing waste in the sector[ii]. While European car manufacturers are also responsible for ensuring that the batteries they install are properly disposed of at the end of their EV performance-life.

However new research shines a light on an emerging market for batteries that no longer meet EV performance standards – as remanufactured stationary storage for homes - offering a source of cheap and available battery storage. And it has car manufacturers sensing a business opportunity with some leading carmakers developing strategic alliances to create a second life market for used EV batteries.

A second life for EV batteries

EV performance standards typically require maintaining 80 per cent of total usable capacity and a resting self-discharge rate of around 5 per cent over a 24-hour period[iii]. A recent report by McKinsey & Company shows that after remanufacturing, batteries that have come to the end of their EV-life could still be useful in performing less-demanding applications than transportation, like stationary energy-storage services.

Shown in figure 1, due to the rapid rise of EVs, McKinsey estimate that repurposing EV batteries has the potential to exceed 200 gigawatt-hours by 2030, representing a global value upward of $30 billion by 2030. 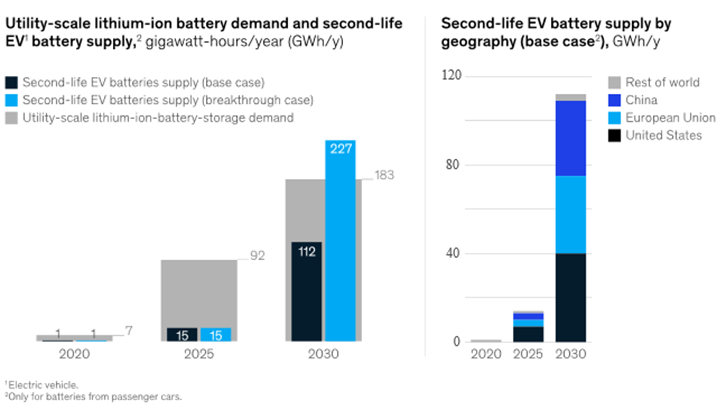 However, the report highlights a number of current challenges of reuse, such as:

Australia’s CSIRO echoes these challenges by also highlighting the lack of policy, protocols or certification around the reuse of batteries for energy storage. Stating that currently, consumers cannot be assured that second life batteries will provide a standard and reliable life span.

Yet McKinsey and the CSIRO remain optimistic. The CSIRO states that, generally, the best use of resources from a material and energy efficiency perspective is to reuse, before recycle. And irrespective of concerns, the increasing opportunity to reuse batteries by car manufacturers will continue to support the second-life opportunity.

While McKinsey believe these challenges can be overcome through targeted action. It suggests that automakers can design EVs with second-life applications in mind, and companies can industrialise and scale remanufacturing processes to reduce costs and maintain the value gap between new and used batteries. It also states that global agencies and private-sector coalitions are already working on industry-wide second-life battery safety standards.

Shown in figure 2, with global EV sales expected to rise (estimated 559 million vehicles to be electric by 2040[iv]) car manufacturers are jumping on board to pilot the potential of the emerging market of refurbished EV batteries.

Figure 2: Where electric batteries are being used and tested in new roles 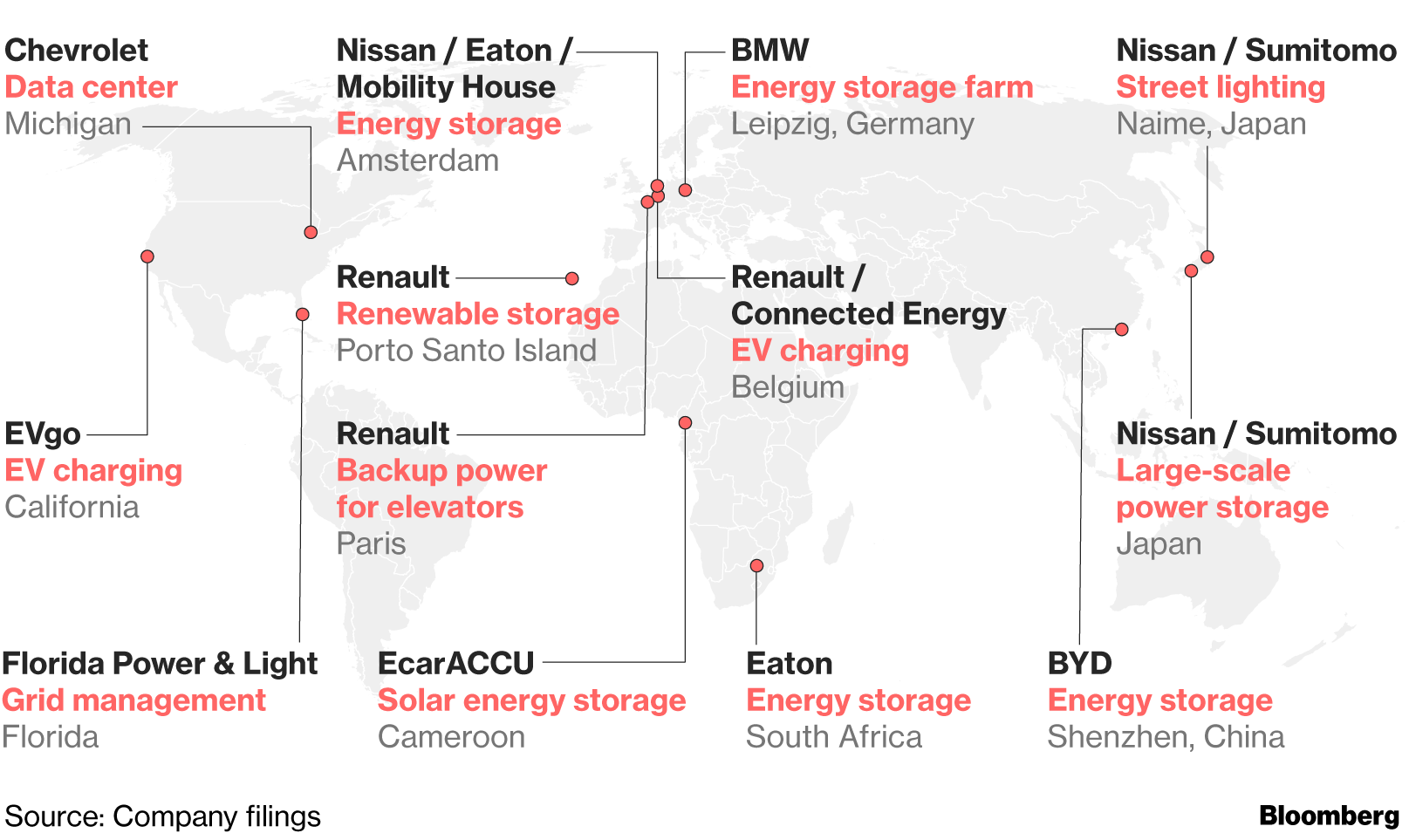 In Europe, EV manufacturers have been ramping up production as tougher rules on reducing carbon emissions have come into force across the EU. There have been calls for a pan-European consortium to develop new battery technologies to build the domestic market and it was recently announced that European governments and companies - including Europe's biggest carmakers - are to form an alliance for developing next-generation batteries for EVs, investing five to six billion euros in the project.

BMW is aiming for a fully sustainable supply-chain, last year announcing that it was collaborating with Northvolt, Europe's largest battery factory for EVs, while also working with Umicore, a materials processing company, to develop battery reuse and recycling systems. In partnership with Bosch, BMW has also teamed with Swedish energy company Vattenfall, on a 2.8 MWh energy storage facility (a total power capacity of 2 MW) using batteries from BMW-model EVs. Located in Hamburg, 2,600 retired battery modules from more than 100 EVs are connected together to form a large power storage, which is used to stabilise the grid and reduce the impact of peak demand[vi].

Hyundai Motor Group and Finnish energy technology group Wärtsilä, have collaborated to use EV batteries in energy storage, which includes advanced energy storage technologies and software[vii]. While Chevy Volt batteries could also find new life through a General Motors pilot program, which has seen the carmaker team-up with American residential energy provider Duke Energy. Duke will trial lithium-ion batteries in grid test demonstrations to investigate the cost efficiencies and utility of the system, and to determine if the batteries can use in wider applications such as powering homes during black and brownouts. GM engineers say the Chevy Volt batteries could still supply an additional 15 years of energy after the cells reach the end of its vehicle performance-life[viii].

Nissan has collaborated with Eaton Industries, a worldwide energy management company, to develop xStorage Home in the UK, which offers solar panels for home with solar battery storage systems. Customers have a choice of buying a new battery or one that has lived its first life in a Nissan LEAF - the world’s first and one of the bestselling mass-market EVs. Nissan has also repurposed retired EV batteries into a power source for camping trailers: the Nissan x OPUS concept camper powers “off-grid adventures” with a storage capacity of 700Wh and a power output of 1kW, the lithium-ion cells are reclaimed from first-generation Nissan EVs[ix].

Due to a growing demand for electric cars in Japan, last year the country opened its first plant specialising in the reuse and recycling of lithium-ion batteries. Operated by 4R Energy Corporation, the plant is a joint venture between Nissan and Sumitomo Corporation. The batteries recycled and refabricated at the factory will be used to offer the world’s first exchangeable refabricated battery for EVs and will also be used in large-scale storage systems and electric forklifts.

Also in Japan, Toyota are planning to install their retired EV batteries outside 7-Eleven stores. The hybrid batteries will store power from solar panels to help power the stores.

More locally, the adoption of EVs in Australia has been low to date (accounting for around 0.15 per cent of new car sales[x]) with most of the focus on recycling EV batteries. But this rate is expected to rise. Currently, the majority of EV batteries are exported from Australia for end-of-life processing[xi]. However some companies provide incentives to swap batteries once their end of performance life is reached, like Toyota, who offers a rebate on new batteries when old ones are returned to manufacturer.

Using Relectrify’s battery and inverter control technology 4R Energy will investigate further opportunities in the storage market, including the repurposing of used batteries from the Nissan LEAF.

The Federal Government’s new legislation to clarify offshore energy developments, was greeted with suggestions it would prompt a rush of offshore wind farms around our coastline. Offshore wind farms typically take 6-10 years to develop and build. Currently many of these projects are in pre-feasibility stage.

Sep 16 2021
Read Analysis
GET IN TOUCH
Do you have a question or comment for AEC?