South Australia's blackouts: It's not black or white

This week the ABC news program Four Corners investigated the origins of Australia’s current energy crisis.  As part of its report, the program raised the relationship between high levels of intermittent generation in South Australia and the extent to which this has impacted on the reliability of supply.  Like many before it, the question of South Australia’s high levels of intermittent generation and increased blackouts was cast in a binary fashion: either renewables caused the blackouts, or they didn’t.

The reality, of course, is more complex and more nuanced.  So what is the relationship, if any, between South Australia’s increased reliability challenges and its role at the leading edge of integrating intermittent renewable energy?

First, let’s review recent key events.  The last coal fired power station in South Australia at Port Augusta (Northern) closed on 8 May 2016.  Since then the SA grid has been operating on a mixture of gas and intermittent renewables (wind and solar) augmented by supply from two interconnectors to Victoria.  In the year to May 2017 renewables have supplied 51.7 per cent of total generation in South Australia[i].

Figure 1: Percentage SA generation breakdown between June 2016 to May 2017 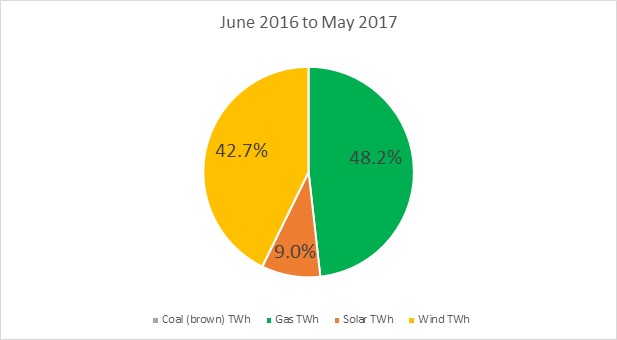 This level of intermittent generation is extremely high by global standards, given the constrained nature of SA’s interconnection (around 25 per cent of peak capacity).

The level and frequency of these events are also unprecedented in the history of the National Electricity Market and in comparison with modern grids around the world.

Second, the Heywood Interconnector was upgraded to increase its capacity from 460 MW to 650 MW from August 2015 and was completed in July 2016[ii].  The upgrade of the interconnector was in response to the increased renewable generation installed in South Australia.

Each blackout is a separate incident, with a different set of events contributing to the blackout.

On a mild Sunday night (low demand) one of the two transmission lines of the Heywood Interconnector was offline and the second tripped, partially islanding SA from the rest of the NEM.  Northern Power Station was operating at the time.  The trip, in turn, was the result of a fault in a newly installed relay as part of the upgrade of the interconnector.  This loss of load resulted in automatic load shedding.  During the 32 minutes SA was islanded, there were two frequency events as wind farms operating in SA increased supply and the regulators at Torrens Island Power station did not adequately respond.[iii]

As a result of this event, AEMO announced in February 2016 it would constrain the interconnector at times when it thought there was a risk of the state being islanded.  It also flagged the idea of constraining wind farms where large, rapid changes in output are observed.[iv]

An extreme weather front moved through South Australia on the afternoon of Wednesday, 28 September 2016.  The associated high winds damaged three transmission lines north of Adelaide.  456 MW of wind generation failed to ride through multiple voltage disturbances and shut themselves off.

The Heywood Interconnector responded to the loss of load by trying to increase flow, but as it was already near capacity (613 MW) the interconnector tripped resulting in further loss of load.  The islanding of SA and the loss of load resulted in a collapse in the frequency and the entire state being blacked out.  At the time of the System Black, wind was providing around 70 per cent of indigenous generation, with the remainder being supplied by Torrens Island and Ladbroke Grove (330 MW).

The inability of the wind generators to ride through multiple voltage disturbances was a result of the configuration of their control settings, which were subsequently adjusted.  It is uncertain if thermal generation (say Northern) would have been able to ride through under similar conditions.[v]

The more material issue was the insufficient levels of inertia in the system to slow down frequency changes and enable load shedding, the need for increased local frequency control and improved local system strength.  The high levels of asynchronous (wind) generation at the time of the event and operation of the interconnector at capacity meant there was insufficient inertia, frequency control and system strength to cope with the loss of load.  In other words, the SA grid was configured in a way which made it more fragile.

AEMO applied minimum operating requirements for South Australia in November 2016.  This requires a minimum of two large synchronous generators to be on-line at all times to “ensure sufficient fault level to wind generation and dynamic reactive support”.[vi]

The effect of this is that at times of high wind generation, conventional generation operates at higher levels of output and more power is exported to Victoria via the interconnector[vii].

Just after midnight on 1 December 2016 a fault on one of the transmission lines connecting South Australia to Victoria islanded the state.  Other lines were out of service at the time.  The fault resulted in the loss of 230 MW of load and resultant blackout of around 200,000 households for more than an hour.[viii]

All SA load was restored within 90 minutes (by 0145 hrs), and first supply was made available to Alcoa Portland Aluminium Smelter (APD) in three hours and 14 minutes after its plant under maintenance was returned to service. Once APD were ready to restore load, AEMO gave permission (0447 hrs), four hours and 31 minutes after the event.  To stabilise the SA grid electricity to BHP Billiton’s operations at Olympic Dam were reduced.

A major storm swept through South Australia on the evening of Tuesday 27 December 2016, causing extensive damage to the distribution network in the Mid North, Adelaide metropolitan area and the Adelaide Hills.  There were around 125,000 residences and businesses without power, many for up to four days as network crews worked to repair the extensive damage.

Another major storm damaged the distribution network cutting electricity supply to around 58,000 households across South Australia.

8 February 2017 was a day of high demand, with maximum temperatures in Adelaide reaching 41 degrees.  This was higher than originally forecast.  Maximum underlying demand for the day was 3,317 MW and maximum operational demand (excluding rooftop solar) was 3,085 MW. 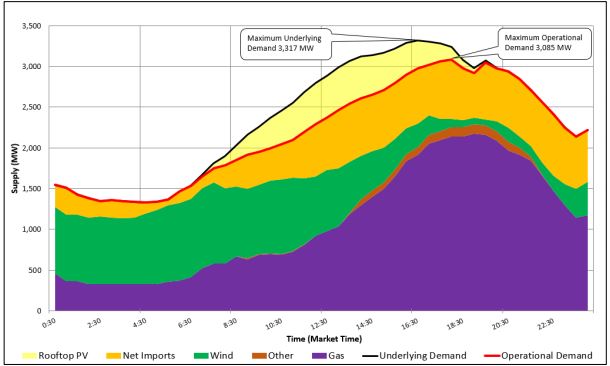 In the morning wind generation reached around 1000 MW, but fell away rapidly after midday and was below 100 MW by 6pm, when peak demand occurred.  At 4pm wind generation was around 300 MW, and forecast to fall to 200 MW by around 6pm.  Wind speeds fell more rapidly than anticipated and wind was generating only 96 MW at 6pm.  Realising this shortfall, AEMO asked Engie to bring its second unit at Pelican Point (165 MW) online to fill the shortfall.  Engie advised it would take four hours to fire up the unit.[ix]

At 6.03pm AEMO directed SA Power Networks to shed 100 MW of load and gave clearance to restore that load 27 minutes later.  A systems fault resulted in SAPN shedding around 300 MW, blacking out around 90,000 households.

Engie has since contracted gas to have the second unit at Pelican Point available.  There has also been discussion about whether improved forecasting measures could be used in the future to better predict weather conditions and short-term demand.

South Australia has had an unprecedented number of significant blackouts since November 2015.  It also has high levels of intermittent renewable generation.  These two factors are only partly related.  South Australia has also experienced three extreme weather events and been impacted by increased transmission unreliability, which combined have been material contributing factors to five of these recent blackouts.

Looking at the South Australian “experiment” to date reveals some other useful lessons.

First, moving towards a high intermittent renewable generation system requires much greater planning and co-ordination than we have seen in SA.  Many of the reliability events could have been avoided or mitigated with better co-ordination.  Of course, this is easy to say with the benefit of hindsight.  We only learnt these painful but valuable lessons because of repeated system failure.

Second, the interventions made by AEMO demonstrate the importance of having adequate supporting local generation or other matching technologies available at the times when they are needed.  All generation (renewable and thermal) and transmission technologies will experience unexpected faults.  It is the ability of the system to respond quickly and adequately that prevents or mitigates the reliability impacts of such events.

Third, the SA experience suggests we may need to think differently about transmission in the future.  It is telling that AEMO is now seeking to constrain the interconnector at times when there is a risk of the state being islanded.  Increasing the use of transmission in the future is a strategic question.  Investment in new transmission may find it is competing with investment in local storage technologies to complement greater intermittency in generation.