Amid calls for a nuclear industry in Australia the phrase ‘small modular reactor’ is sometimes thrown about as a solution to our energy needs.

Small modular reactors (SMR) are talked about a lot but there isn’t much to show at this stage. There is one currently operating in Russia and they remain a work-in-progress.

SMRs are generally considered to be reactors of 300MW or less developed as modules which can also be combined for larger plants. The International Energy Agency (IEA) has listed more than 50 SMRs in development.

The calls for nuclear power in Australia have shifted from building large-scale plants to advocates arguing for SMRs as a cleaner alternative to fossil fuel generation. The Federal Government’s Technology Investment Roadmap had a watching brief on this technology.

There are a number of key impediments to nuclear power generally; its high capital cost, long build times, and the need to gain a strong social licence and political bipartisanship.

A further issue is the lack of flexibility in nuclear plants given the need to complement a grid dominated by variable renewable generation in the not-too-distant future.

SMRs are claimed to have a number of perceived benefits:

Despite these perceived benefits, modern SMRs are still in development stage and are yet to reach commercialisation, and as such, remain an unproven technology to date.

Dr Ziggy Switkowski, the former head of the Australian Nuclear Scientific and Technology Organisation who chaired a federal review of nuclear power in 2006, told the Federal Parliamentary inquiry “on paper, they look terrific” but also flagged that we won’t know the potential for SMRs “until the SMRs are deployed in quantity, and that’s unlikely to happen for another 10 or so years”. Even that timeframe now looks optimistic.

SMRs are expensive too. In 2019 the Rolls Royce company proposed a 440MW plant with a reported price tag of $2.7 billion for Australia.

In the USA, Portland based NuScale Power says it will have SMR modules operational by the end of the decade.

It’s all about the base

Nuclear power plants operate as baseload generators; they are not designed to respond quickly to follow changes in load. SMRs are expected to be able to respond faster than traditional nuclear plants, so could be a better fit with increasing amounts of renewable generation capacity.

Inflexibility is a problem that is particularly acute in Australia due to the fastest growth in variable renewable generation in the world. This challenges the electricity market as it has to deal with supply that fluctuates widely during the day, depending on the weather. Current nuclear generation is not agile enough to deal with rapid rises and falls in supply and demand; It cannot ‘fast start’ like pumped hydro, gas-fired peaking plants, and batteries.

NuScale states that its modules can ramp up quickly – but this is based on modelling and it’s difficult without operating plants to assess the accuracy of its claims. Regardless, operating SMRs at reduced capacity, as with larger nuclear plants or any dispatchable plant, will impact its economics.

A new report by the Institute for Energy Economics and Financial Analysis (IEEFA) pulls no punches when it describes the small modular reactor (SMR) project NuScale is building for the Utah Associated Municipal Power Systems (UAMPS). It the first and only SMR design to receive design approval from the US Nuclear Regulatory Commission.

“Too late, too expensive, too risky and too uncertain. That, in a nutshell, describes NuScale’s planned small modular reactor (SMR) project, which has been in development since 2000 and will not begin commercial operations before 2029, if ever.”[i]

The report questions NuScale’s $58/MWh price of power, saying it is likely to be much higher and sounds a warning to buyers of the power that they will bear these costs via long-term contracts.

“By 2029, the soonest the first module is projected to be in service, that price, escalated at 2% per year, will have climbed to $69/MWh. More importantly, neither the $58 nor the $69 price is a guaranteed or actual price. Instead, it is just the currently estimated target price developed by NuScale and UAMPS through a modeling exercise about which very few details and no calculations have been released.”

The report estimates the cost of the SMR technology against new build renewables and battery storage.

Figure 1: Comparative costs of SMR and RE technologies 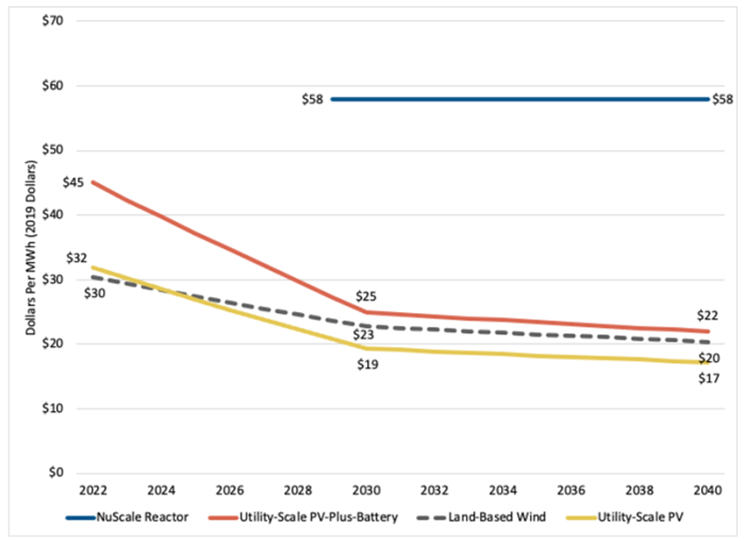 The report also raises questions about the development costs with entities “without vested interests in the technology’s commercialization” expecting them to be much higher than NuScale’s current overnight cost estimate of USD2,850/kW. 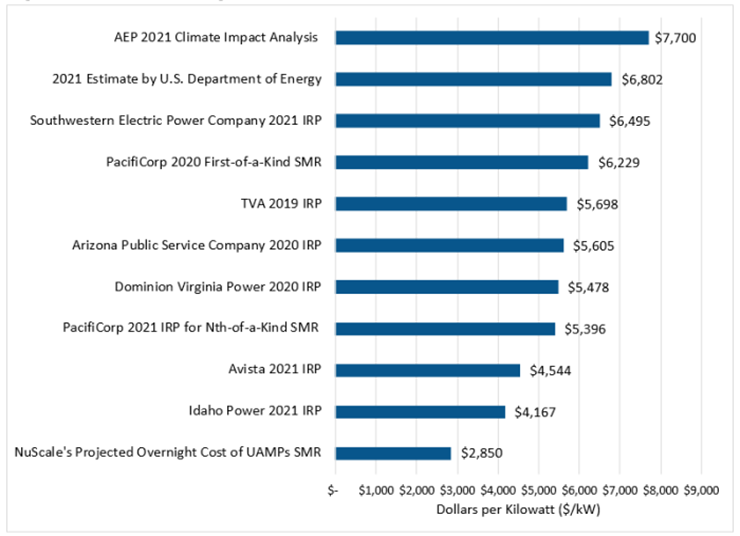 It flags that recent nuclear industry experience shows that build times for new nuclear reactor designs have taken “more than twice as long to build as the owners projected at the start of nuclear”. 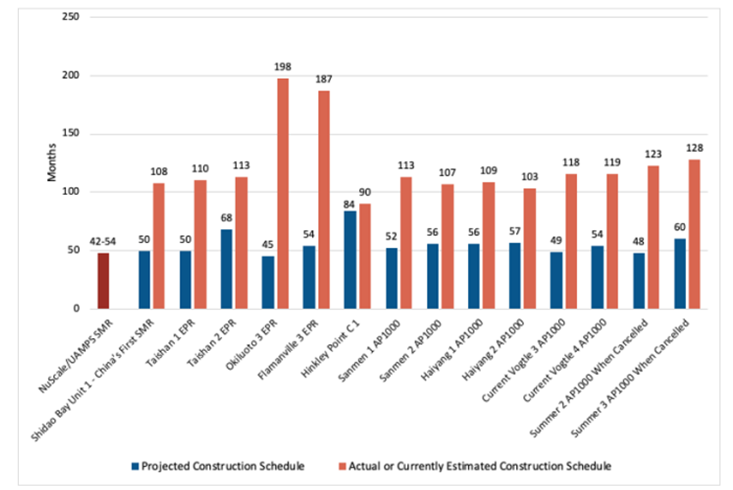 The report is critical of NuScale’s claims about the flexibility of the SMR saying, “NuScale’s marketing is misleading because they can’t really say what the new SMR’s features will do because none have been built and operated. It also examines cost overruns on other nuclear projects including the Hinckley reactor in the UK, Okiluoto 3 EPR in Finland and Flamanville EPR in France.

“In addition to higher construction costs, these projects also have experienced higher financing costs as their construction schedules have been extended dramatically.”

A further challenge for NuScale’s plant is that the grid is rapidly evolving. As in Australia, the generation fleet will be very different in the US in the coming decades. The IEEFA report expects the growth in variable renewables in the western US by the end of the decade will put downward pressure on prices and increase NuScale’s competition. It cites reports that at the end of 2020 there was an estimated 280,000MW of proposed solar, wind and battery storage capacity in the active utility and regional interconnection queues in western US .  It underlines that like Australia the amount of renewable generation is increasing at a rapid pace which will bring a focus on transmission and congestion management.

IEEFA argues: “The new paradigm involves fast-growing numbers of flexible and dispatchable solar and wind farms located at geographically diverse sites, often with grid-scale storage batteries, and increasing numbers of distributed energy resources (rooftop solar). This new grid, without large conventional fossil and nuclear “baseload” plants is the one against which the NuScale SMR proposal should be evaluated.”