Signs of growth: CPI and the renewable job market

Last week the Australian Bureau of Statistics (ABS) released the Consumer Price Index (CPI) results for the March 2018 quarter, and a few days later, reported on renewable energy employment for 2016-17. We take a look at both reports and what the ABS found.

According to the latest figures from the ABS, the CPI rose 0.4 per cent in the three months to March 2018, leaving year-on-year CPI at 1.9 per cent for a second consecutive quarter (Figure 1). 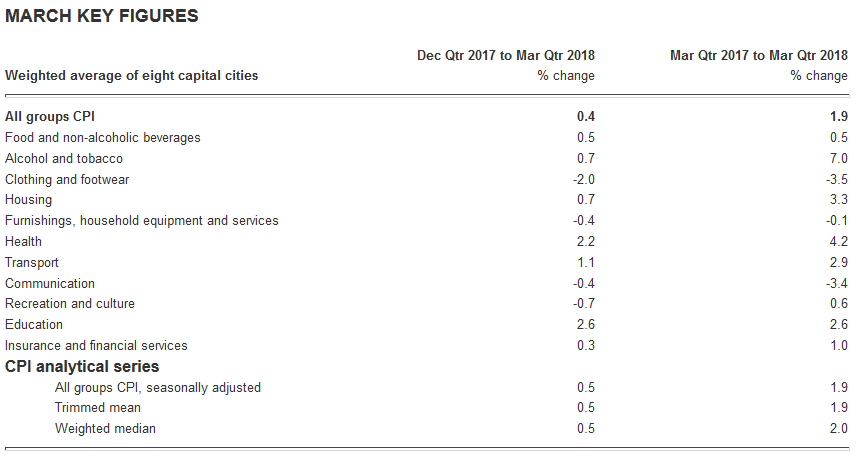 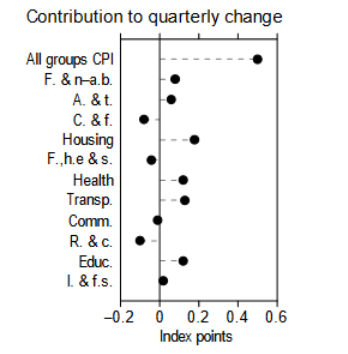 Across all groups, CPI rose in seven of the eight capital cities. Melbourne recorded the largest rise (0.9 per cent) and Darwin had no movement. The Household Group – which includes electricity, and gas and other fuels - was the most significant positive contributor to the quarter’s CPI (Figure 2). The ABS notes that the most significant rises in the March quarter include gas and other household fuels (6.0 per cent)[i].

The Household Group’s CPI increased by 0.7 per cent in the March quarter, with rises in five of the eight capital cities.

Over the last 12 months, the group has increased by 3.3 per cent. The report notes that the main contributor in the March quarter was gas and other household fuels (+6.0 per cent) and electricity (+1.9 per cent), due to increases in wholesale prices.

While the ABS measures the quarterly price movements by metropolitan households across the nation, it does not measure the difference of retail prices between cities. Figure 3 and 4 show the quarter, annual, and five-year change percentage across each capital city for electricity and gas and other household fuels, respectively. 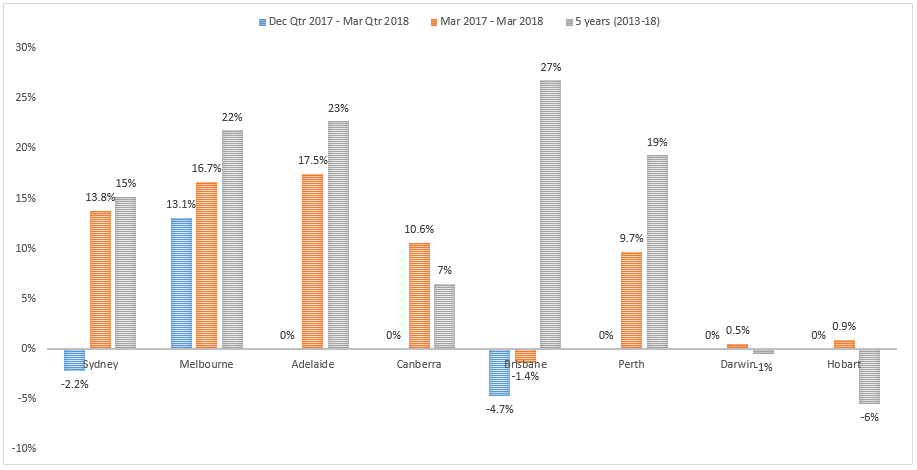 Figure 4: Gas and other fuels percentage growth, per city 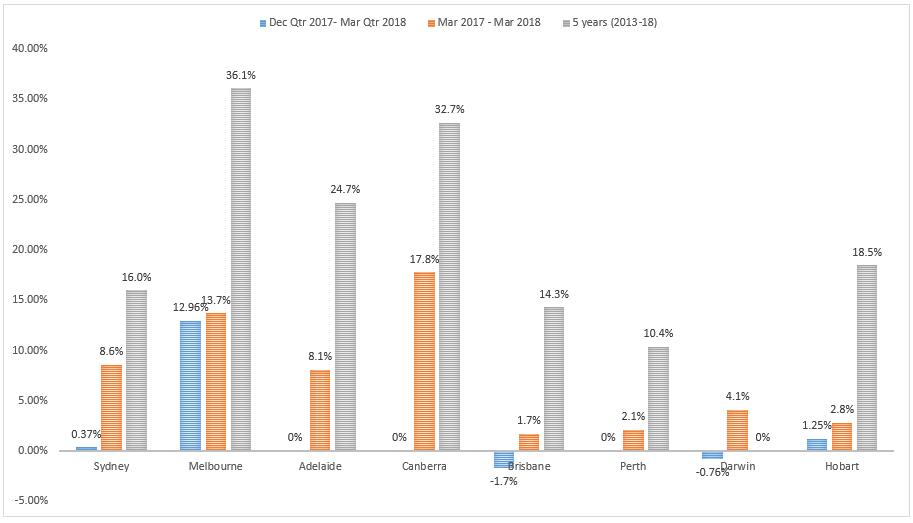 For the March quarter energy price movement varies across the cities: Sydney's CPI rose by 0.3 per cent across all groups, the ABS states this was partially offset by a 2.2 per cent decrease in electricity.

The main contributor to Melbourne’s total CPI was electricity (+13.1 per cent) and gas and other household fuels (+13 per cent). And while Brisbane CPI rose 0.1 per cent, it was partially offset by a 4.76 per cent fall in electricity. The ABS notes that this fall is due to discounting by energy retailers.

While the proportion of energy supplied from renewable sources in Australia remains relatively small (1.7 per cent in 2015-16), last week the ABS announced that renewable energy production jobs grew by 33 per cent (+3680) in 2016-17 - to reach a total of 14,820 full-time equivalent (FTE) positions nationally.

The increase in FTE jobs has been primarily driven by construction activity for large scale solar PV systems (+1240) and wind farms (+1370) in Queensland, New South Wales and South Australia, which represent 78 per cent of all renewable energy employment in Australia. 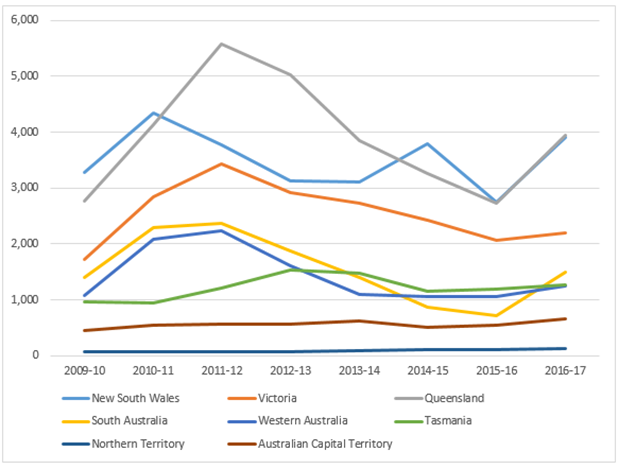 Queensland had the largest increase in renewable energy employment gaining an additional 1220 positions, to make a total of 3940 FTE jobs in 2016-17. This reflects the construction of 17 large scale solar farms across the state, and there are claims of the potential for another 40-plus farms[iii].

South Australia experienced a 110 per cent increase – from 710 jobs in 2015-16, to 1490 FTE positions in 2016-17. New South Wales also gained 1160 extra jobs to make a total of 3910 FTE positions in the state. The rises in both states predominately come from construction work on large scale wind generation. 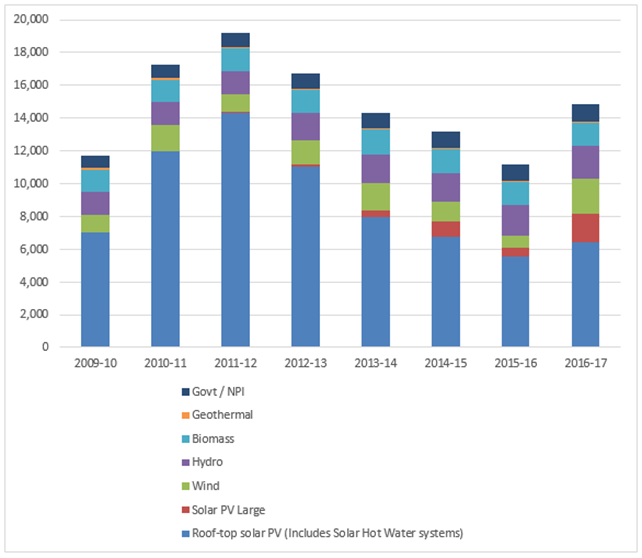 While the number of roof top solar jobs has declined significantly since 2012, it still remains the largest FTE employer in the renewable energy sector making up 43 per cent in 2016-17 (Figure 6). Across the nation, roof top solar, which includes solar hot water systems, added 860 FTE positions in 2016-17.

The fluctuation of FTE roof top solar jobs is driven by a range of mechanisms, like government policies, taxes, and subsidies. Feed-in tariffs (FiT) have also influenced FTE jobs in the roof top solar industry due to the varying FiT rates over the time frame. From 2011-12 there were reductions in FiT prices, which correspond with the fall in new roof top solar installations. This suggests that the number of FTE jobs in the renewable energy sector are mainly short-term roles.

Employment in wind remained relatively steady from 2009-10 to 2014-15, averaging around 1366 FTE positions. In 2015-16 wind FTE jobs dropped by 37 per cent, but 2016-17 saw a swing back and wind industry jobs peaked at 2140 positions nationally. This is representative of the wind farms currently under construction, shown in Figure 7.