Should solar PV still be in the grants ARENA?

The Australian Renewable Energy Agency (ARENA) has chosen 12 projects as part of its million dollar large-scale solar round[i]. The greater capacity in large-scale solar is expected to play an important role in Australia’s energy transformation with over 78 per cent of currently proposed projects expected to come from solar and wind. Despite the importance of large-scale solar it is surprising that ARENA, a body originally set up to help embryonic technology get off the ground, is supporting what are now established technologies to enter the market. ARENA currently provides funding for some newer technologies, such as wave projects and battery storage demonstration across Australia, but the majority of the committed funding is predominantly to solar photovoltaic (PV) projects.

Once built, the 12 new large-scale solar PV plants are expected to triple the amount of energy produced from large scale solar. There will be six plants built in Queensland, five in New South Wales and one plant in Western Australia, with a total capacity of 480MW, supported by $92 million in ARENA funding. The projects are listed below, along with their location.

The proposed installed capacity is expected to deliver one tenth of the new capacity required to meet Australia’s 2020 renewable energy target.

Although greater capacity in large-scale solar contributes to Australia’s energy transformation the question remains: is it the most appropriate area for ARENA’s funding. ARENA was established to assist embryonic technology to reach commerciality, while its latest round has largely supported established technologies to enter the market. This comes after recent analysis by the International Energy Agency (IEA) on ‘Next Generation Wind and Solar Power’ highlighted that investment in additional flexible resources comprising demand-side management, electricity storage (such as pumped hydro), grid infrastructure and flexible generation was just as important as large-scale solar and wind investment for future energy supply[ii].

ARENA was established in 2012 with the expectation it would take a technology-neutral approach in considering project applications. Its mandate is to capture and share knowledge from its projects, and its investment grants are designed to span the commercialisation pathway from research and development to demonstration. Accordingly there is an opportunity cost in providing funding for near-commercial deployment projects. ARENA’s former chair, Greg Bourne, made the point this week and pointed to the fact that the solar projects that were committed to prior to ARENA being established and which the agency inherited, required 50 per cent grant funding, while the current projects only required 10 per cent grant funding, “so probably the large solar… is done”.[iii]

Agreement was reached between the Federal Government and Labor Opposition on future funding for ARENA this week. As a result of the funding agreement, the agency now has funding agreed for the next five years to invest in projects and initiatives which can meet ARENA’s objective to accelerate the commercialisation of renewable energy solutions and diversify Australia’s energy mix. According to Bourne: “You are trying to create the opportunity to move things along the… development chain to true commerciality and then eventually you don’t need grant, you just need debt and equity”[iv]. The grant is important, along with debt and equity funding, he noted, in the early stages of a technology’s development.

The money currently being spent on large-scale solar could be directed towards more innovative technologies like battery storage, which will be important in managing the intermittency problems associated with high penetration rates from renewables such as wind and solar in the National Electricity Market. The proposed projects in Figure 3 show the small number of other technologies being invested in, with only 14 of those being proposed demonstration projects being undertaken at the moment. The remaining technologies are near-commercial deployment projects with solar and wind being the largest proportion of proposed and approved projects.

Figure 3: Number of proposed, approved and advanced planning projects across Australia as of May 2016 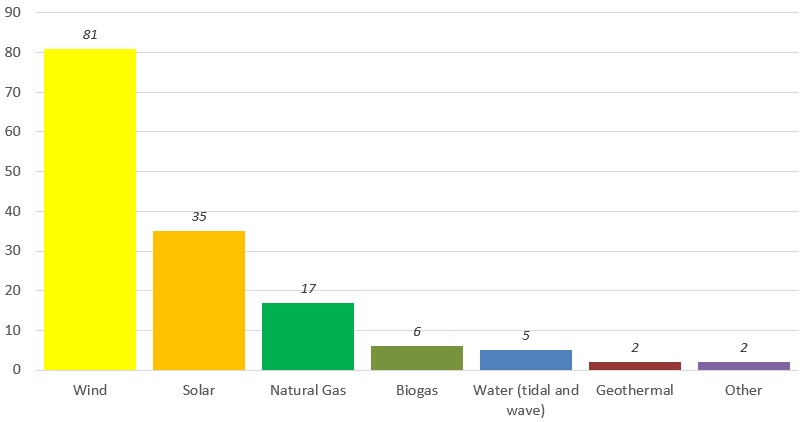 Demonstration projects in particular face a funding challenge. The private sector in most cases will fund projects that will generate a return, and can be unwilling to provide finance until results are proven. ARENA therefore has an important role in helping prove up projects and technologies via activities like research, development and demonstration.

Economic case for government support for Research, Development and Deployment

To get any demonstration project off the ground, a commercial business will face a series of costs (negative cashflows) and expect to earn a series of returns (positive cashflows). Neither of these are entirely certain. Accordingly the net cashflows have a risk profile – the riskier the project, the greater the overall expected returns required to justify investment in the project.

Demonstration plants though are virtually bound to be cashflow negative, as Figure 4 suggests, without government support. The new technology will typically be somewhat more costly to build and operate than a plant capable of delivering the same amount of energy built using mature, well-understood technology. But it will be competing against these plants in the market, and the competitive price is likely to be well below its costs. Figure 4 provides an illustration of the commercial considerations for governments deciding how to support demonstration in particular, to bridge what is known as the Valley of death. 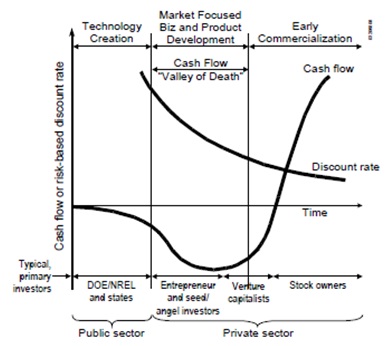 Funding for RD&D helps to develop technologies to the point where they can begin to be deployed, which makes ARENA’s role important. The rate of switching from older technologies to these new technologies will depend on both relative costs and on the extent to which consumer’s value the long term, often at that stage uncertain, benefit of the new technology. The Grubb Curve at Figure 5 shows the development stages of various renewable energy technologies as assessed by ABARE in 2010, and the anticipated costs of full-scale application.

Figure 5 shows that technologies under the development and demonstration phases face the highest costs so funding is required at these stages, as well as in the early stages of operation where outcomes are highly uncertain.

ARENA does commit funds to projects such as the Carnegie Wave project in Western Australia (WA), the solar and storage trial at Alkimos Beach residential development in WA, Kidston pumped storage project in Queensland and King Island Renewable Energy Project in Tasmania which are in the development phase.

As the most recent funding round illustrates, ARENA’s focus is predominantly around solar PV, which is in the deployment phase and may not necessarily require grant support as much as other technologies, such as wave and biomass energy. “By and large (commercial scale solar) is coming to commerciality where equity and debt will come to the party and fund (the projects) without grant,”[v] Greg Bourne told Radio National.

There are numerous projects which receive funding apart from ARENA’s funding. The Geelong Geothermal Project[vi] was awarded $32 million in Federal and State Government grants, which has allowed Greenearth Energy to progress the development of the Geelong Geothermal Power Project (GGPP). A North Queensland Bio-Energy Corporation[vii] is a planning the construction a $600 million renewable energy facility incorporating sugar (raw), ethanol and power generation in North Queensland, which is gathering funds from cane farmers, Herbert river residents and the general public.

With Labor achieving an agreement with the Government to provide ARENA with secured funding of $800 million over five years[viii] it hopefully could lead to a greater targeting of more embryonic technologies to assist them to get off the ground.

[i] ARENA, 2016, “Historic day for Australian solar as 12 new plants get support”, << http://arena.gov.au/media/historic-day-australian-solar-12-new-plants-get-support/ >>