On January 19, Sandbag Climate Campaign released its report on the European energy market for 2015. The report focuses on the change in generation mix, its impact on emissions across Europe for the 2014-15 financial year and the factors which have led to these changes.

Overall, total generation across Europe increased by 37 TWh, with renewable generation accounting for the increase. Total fossil fuel generation remained relatively unchanged for the year. Hydro and nuclear, however, fell with lower than usual hydro dam levels and issues with some base load nuclear generators which are expected to be fixed for the 2016 financial year.

The generation mix across Europe varies across countries with different policies having a significant impact on the changing mix. Below is a brief summary of how each country contributed to the rise and fall of different fuel types.

The increase in renewable generation was primarily driven by three countries, Germany, Italy and the UK. Smaller increases occurred in Sweden and France. In some countries such as Spain and the Netherlands, renewable energy actually dropped when compared to the previous year. Figures 2 and 3 show the annual changes in renewable and fossil fuel generation respectively.

Figure 2: Change in Renewable Generation by Country 2015 versus 2014 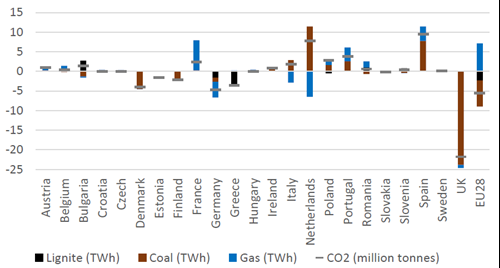 Nuclear is expected to play a larger part of Europe’s energy mix in 2016 as nuclear plants in several countries encountered issues in 2015 and these are anticipated to be resolved in 2016. Belgium is also bringing 2.4 GW of nuclear plant back online in December 2015 to reduce their reliance on fossil fuels.

The Spanish-French interconnector went live in November 2015 and will reduce Spanish coal output. Hydro levels are also expected to return to normal levels which will reduce reliance on fossil fuels.

The Sandbag consultancy report is a brief overview of changes which occurred in 2015. The effects of policy, weather and interconnectors all play a major factor in individual countries as highlighted above. Australian energy policy is often compared to different European nations and their own ambitious targets. When making comparisons, it is worth noting the complexity of the energy system in Europe, how these countries energy mixes differ substantially and the interconnection between their respective energy markets.