South Australian Premier Jay Weatherill’s renewables “experiment” – with penetration of more than 40 per cent – has given us a chance to assess some of the impacts and implications that are likely to arise more broadly in the National Electricity Market (NEM) as we continue to transition our energy system.

We now have a raft of real-world data to call on.

This is the first of a two-part look into what the data on the South Australian system reveal.

South Australia has just over 2,900 MW of conventional dispatchable generation, 90 per cent of which is gas-fired and the balance liquid-fuelled[2]. Renewables comprise 1,675 MW of large scale windfarms[3] and an estimated installed rooftop PV capacity of around 750 MW[4]. This totals 5,325 MW of generation capacity. In addition the two interconnectors from Victoria can carry up to about 800MW of imports.

Maximum consumption[5] in South Australia peaks at around 3300-3400MW, dependent on weather conditions. Average consumption is less than half this figure at just over 1,550MW, emphasising just how variable electricity demand in the state is.

The supply shares of SA’s annual energy in 2016-17 were approximately 40 per cent each for conventional generation and renewables (large and small scale), with 20 per cent imported from Victoria[6]. 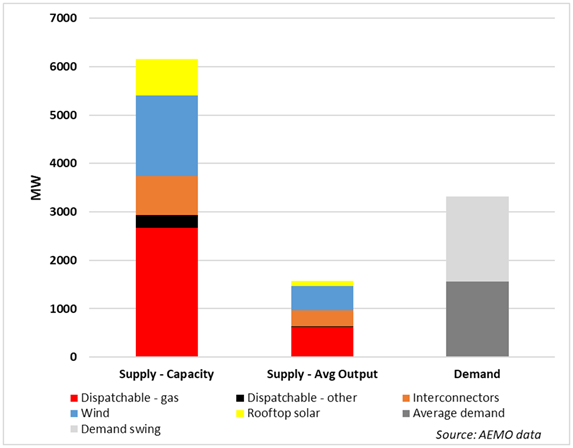 One striking aspect is the apparent abundance of generation and import capacity – nearly double peak consumption and four times average consumption! Expressed in terms of annual utilisation, generators and interconnectors on average operate at only 25 per cent of their maximum capacity.

Windfarm and solar PV average annual output is limited by available wind and sunshine, in the case of wind in South Australia to about 33-35 per cent of capacity, and rooftop PV output to just under 15 per cent. Obviously peak outputs from these sources are much closer to their installed capacity.

The limiting factor on average annual output from dispatchable sources and imports is not fuel supply – although this may limit individual generators – but the physics of supply equalling consumption. Ignoring exports for simplicity, we can express this energy balance requirement as:

This equation emphasises the reality that to balance supply and consumption, output from dispatchable sources and imports must meet residual demand - the difference between two largely non-controllable components, consumption and renewables output[7].

We can analyse important aspects of the energy transition through the residual demand to be supplied from dispatchable sources. As renewables enter the system in significant quantities, this residual demand changes markedly, which has implications for the role of dispatchable resources and also for energy storage and demand management technologies which are yet to be deployed at scale. 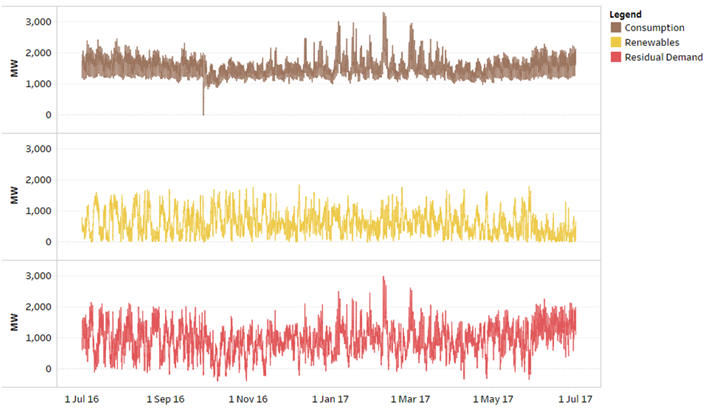 Figure 2 shows that residual demand is more variable than consumption[8] and has a lower average level. For short periods residual demand is negative, when renewables output exceeds consumption. In the case of South Australia this “excess” energy can potentially be exported via interconnections to Victoria. In an isolated system (such as the entire NEM – obviously with much higher renewables penetration than currently), negative residual demand would need to be dealt with either via energy storage or curtailment of renewable production. 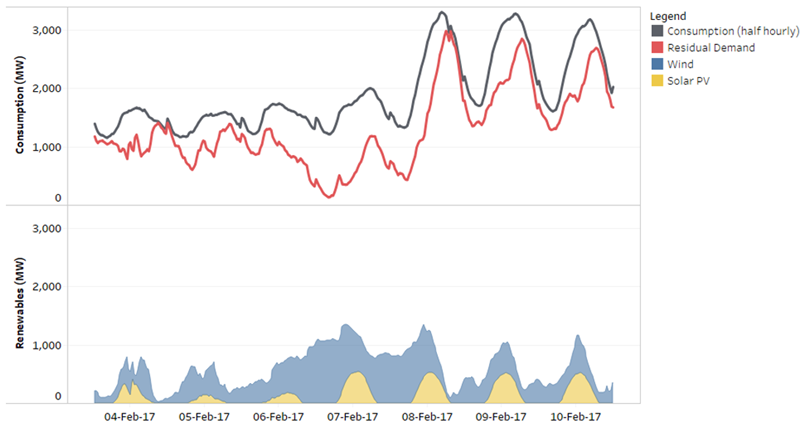 A snapshot of one week’s data in Figure 3 shows that residual demand has similar characteristics to total consumption, but a wider range of fluctuation. In principle, supplying residual demand with conventional dispatchable generation is not qualitatively different from what the supply side of the electricity industry has been doing for a century – meeting a variable, continuously changing call on output. But the extent of variability is greater – which impacts on the kinds of dispatchable generation best suited for the task.

An informative way to analyse the impact of renewables is to convert half hourly chronological traces for consumption and residual demand to duration curves, by sorting values from highest to lowest across a whole year. These curves indicate the percentages of time for which consumption or residual demand are above a given level: 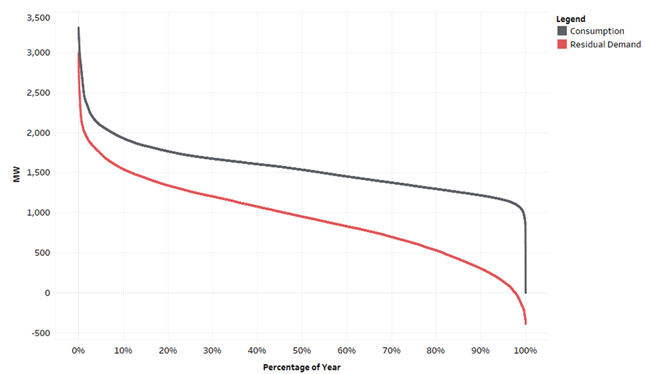 The left-most, highest points on these curves show maximum half-hourly consumption and residual demand respectively. The difference in these maximum values is about 300 MW, whereas the difference in averages is nearly twice this figure. The right hand ends of the curves indicate that consumption almost always exceeded 1000 MW[9], but that residual demand was negative for 2.5 per cent of half hours in 2016-17.

Implications of the Changing Load Shape

The different shapes of these curves indicate why, as renewables enter the system, there is a reducing role for dispatchable baseload generation: the steeply declining shape of the residual demand curve means there is less headroom for generation running at sustained high output (relative to its capacity) throughout the year. Increasingly required in its place are flexible dispatchable resources operating in a more variable regime to balance system needs. The cost structure of traditional baseload generation, typically with high fixed capital and operating costs, makes it much less cost-effective to build and operate for this purpose than for near-continuous high output.

The economic challenge of meeting a residual demand curve with this peaky, steeply dipping shape is that a substantial proportion of the investment in dispatchable resources required to service the peak operates at very low capacity utilisation. The coloured areas on Figure 5 below represent the quantities of energy corresponding to the top and bottom 50 per cent of residual demand levels. The fixed costs of the dispatchable capacity supplying the top 50 per cent – operating only about 10 per cent of the time – are associated with a far smaller volume of energy than for that supplying the bottom 50 per cent, greatly increasing the unit costs of the “marginal megawatt hour”: 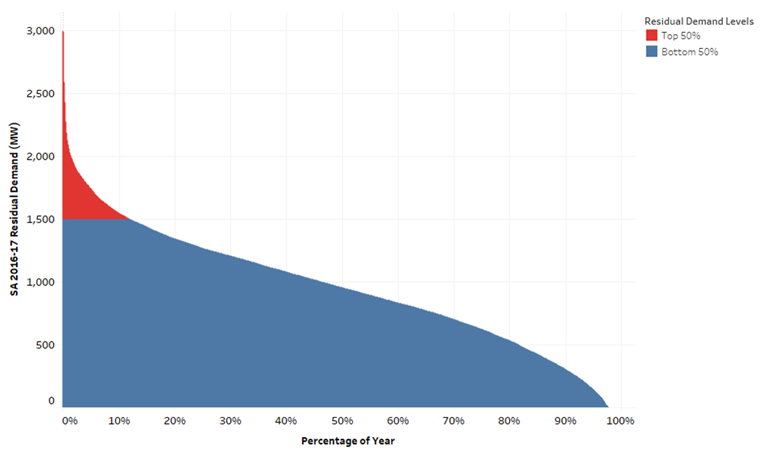 Resources or mechanisms for cost-effectively addressing the “needle peak” in residual demand are clearly vital.

The 1600 MW of wind and 750 MW of rooftop solar PV installed in South Australia contribute 40 per cent of local energy consumed and 50 per cent of local production. Adding more of this generation would continue to reduce the total energy required from dispatchable resources, but do little to reduce maximum residual demand. Scaling up 2016-17 renewable output data for South Australia[10] and determining the change in maximum residual demands illustrates this: 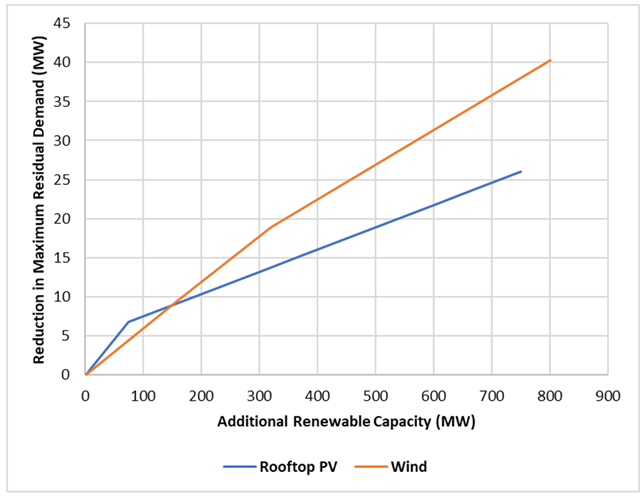 The reason for these very small impacts is that with high renewables penetration, maximum residual demands necessarily correspond to periods of low renewables output, late in the day when solar output is low, and during calm periods with little windfarm output. New solar and wind capacity would also generate little additional output in these periods and therefore have little impact on residual demand levels and the peak capacity challenge.

At the other end of the duration curve, as renewables capacity and maximum outputs increase, the size and incidence of negative residual demands increase significantly. Figure 7 below illustrates the impact of a hypothetical increase of 50 per cent in both installed wind and rooftop PV capacity: 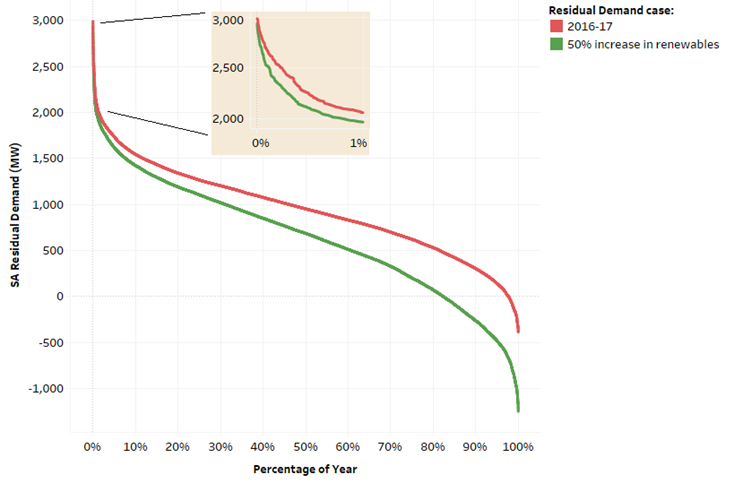 In the actual South Australian electricity system, at least some of this excess production could be exported via the interconnectors to Victoria, which also play a key role in meeting residual demand peaks. However in an isolated system – say the whole of the NEM with substantially greater renewables penetration – other solutions would be needed.

This is where non-traditional dispatchable resources like storage and demand management come in.

A second article 'The role of demand management, batteries and storage' builds on the analysis above to examine the potential role for these technologies.

[1] This article won’t be addressing the system security (frequency control, inertia, system strength etc.) or transmission issues associated with integration of different generation technologies, although these are other important challenges of the energy transition.

[5] “Consumption” means all energy supplied by large scale generation, imports, and rooftop PV including grid losses and energy used in power stations. It excludes supply from small “embedded generators” for which AEMO does not publish detailed half hourly data.

[6] The interconnectors also export energy to Victoria. However in 2016-17 gross export volumes were only about 6 per cent of gross imports and for simplicity this analysis ignores exports.

[7] Output from all newer large windfarms can be reduced under AEMO control to manage real time system and network constraints, but this “semi-dispatch” capability is not significant at the level of annual averages.

[8] The standard deviations of consumption and residual demand are 306 MW and 481 MW respectively. Their coefficients of variation (ratio of standard deviation to average) are even further apart at 0.2 and 0.51.

[9] The zero levels at the extreme end of the consumption curve reflect the September 2016 system black.

[10] The high level of PV penetration and the large number of windfarms already operating in South Australia mean that there would be little if any further diversification of output from new installations, so uniformly scaling recent half hourly historical output is a reasonable approach.