This was the phrase Sir Humphrey, the consummate senior public servant, would use to put off his Minister, Jim Hacker. For courageous, read risky. Sir Humphrey’s eyebrows might have been raised by the Weatherill Government in SA announcing that it would procure its own energy needs from a relatively cutting edge technology, concentrated solar power and storage. The 150MW facility will be built by SolarReserve at Port Augusta, previously home to the Northern and Playford brown coal power stations.

What is concentrated solar thermal?

There are two major types of concentrated solar power (CSP), parabolic troughs and solar power towers[i]. In the case of parabolic troughs, curved mirrors are arranged along a line in order to focus sunlight onto a tube containing a fluid. The heated fluid can be used to drive an electric turbine. The majority of CSP plants of 50MW and above around the world are this type, with Spain and the US having the greatest capacities of such plant. Port Augusta is the other type, a solar power tower, where the mirrors, otherwise known as heliostats, are arranged around a central tower and focus the sun’s energies on fluid in the tower. Higher temperatures can be achieved this way, and thus higher efficiency. Both types can incorporate storage, for example in the form of molten salt or synthetic oils that retain heat energy well. This allows the power station to be run more like a dispatchable thermal power station, with the advantage over most other fuel types of being zero emissions.

CSP is much less prevalent than utility-scale PV. It is more reliant on direct sunlight, and so is less geographically versatile than PV, which can operate at reduced capacity in conditions of partial shade.

The images below show the scale of the plant’s heliostats. 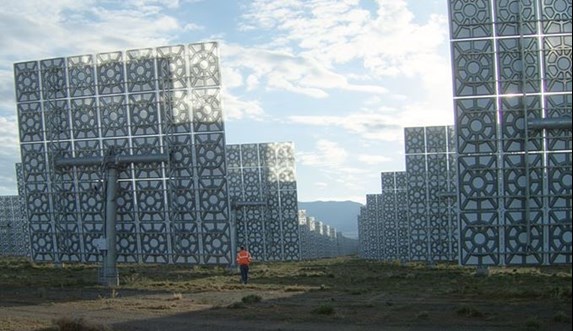 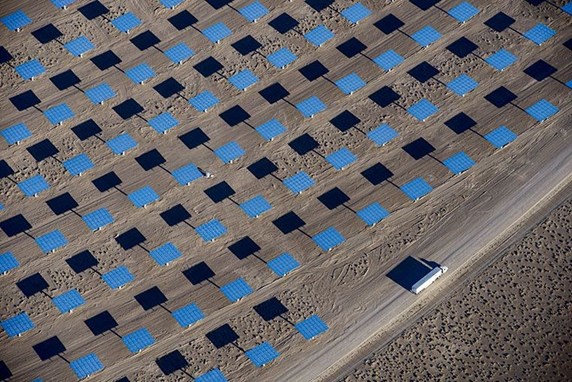 SolarReserve’s operational plant is the Crescent Dunes plant at Tonopah in Nevada. The 110MW plant, which also has up to 10 hours’ worth of molten salt storage capacity has a land footprint of 1.2 square kilometres and the central tower is over 200 meters high. 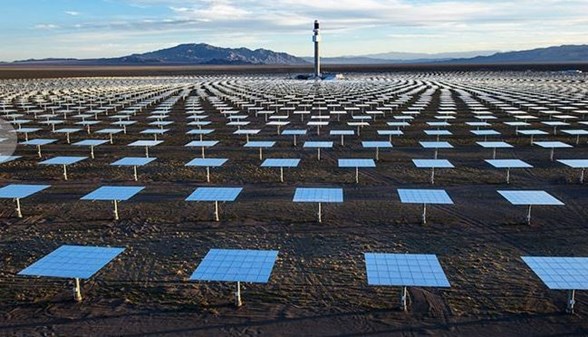 Presumably the Port Augusta plant will cover a larger area as its maximum output has been reported as 150MW. Crescent Dunes took four years to build and commission, and ramped up to full output in mid-2016. Unfortunately a leak in one of the molten salt tanks took the plant off line for around eight months, but it is now back in service.

The only central tower CSP plant larger than Crescent Dunes in operation is the Ivanpah plant in California. This 392MW plant does not have storage and uses natural gas as a start-up fuel each morning. The plant was reported to have struggled to meet its contractual obligations in respect of output in its first two years of operation, although NRG, the operator of the plant have since announced that it is now in compliance with its contract with two of California’s large utilities[iii].

None of this is to suggest that CSP is an inherently poor or unreliable technology, merely to highlight that it is a new technology type and it would be realistic to expect some operational issues with the first few large plants to be built. In that respect it is an interesting choice to be part of SA’s Energy Security plan.

Cheap at half the price?

Many eyebrows would have been raised at the price quoted by the government of $75/MWh. The project will benefit from $110m of concessional equity from the Federal Government expected to be subject to around a 3 per cent return, that was part of a deal done with independent Senator Nick Xenophon for support of legislation earlier in the year. The 20-year PPA that the SA Government was offering would also have helped secure a lower price than otherwise. Nonetheless, it is still significantly lower than expected costs for this technology type. Grid connection costs may be low for a new project if they are able to repurpose the connection assets of the former Northern power station. If it is indeed the new cost benchmark for this technology, we can expect to see more as this compares well with other zero emissions technologies, especially when the value of the storage is accounted for. But scepticism has been expressed, with one local analyst pointing out that at the company’s own estimate of output, and capital cost, it would take around 16 years’ electricity revenue to recover the capital costs, even without allowing for operating expenditure and the time value of money[iv].  It may be that SolarReserve anticipates additional revenue streams from generating LRECs and from participating in the ancillary services market.

The SA plant, being larger than any existing solar power tower plus storage, represents another exciting step for South Australia in its renewables integration experiment – although South Australian electricity customers may have had enough excitement to be going on with. If it fulfils all expectations, not least cost, then it has the potential to be a real game-changer, given its potential to be run as a dispatchable power station and to provide real inertia and other ancillary services. Ten hours of storage of the solar power suggests it can’t be expected to be a truly 24/7 plant, but it can still add value to the system.

[i] Two other types: linear Fresnel lenses and dish receivers are not currently used at utility scale.