The interconnector would be commissioned in 2022 and deliver net market benefits of ~$900m over 21 years.  In addition to its previously recommended proposala, the subject of its June 2018 Project Assessment Draft Report,[i] ElectraNet has suggested adding a $46 million 500MW 220kV 24km line from Buronga in NSW to Red Cliffs in Victoria.  The spur line would facilitate the connection of additional solar capacity in western Victoria, providing increased access for the plant to the Sydney and Adelaide load centres.

While the Australian Electricity Market Operator (AEMO) dubbed the project RiverLink in its Integrated System Plan (ISP),[ii] ElectraNet has now settled on the name “Project EnergyConnect”.[iii] 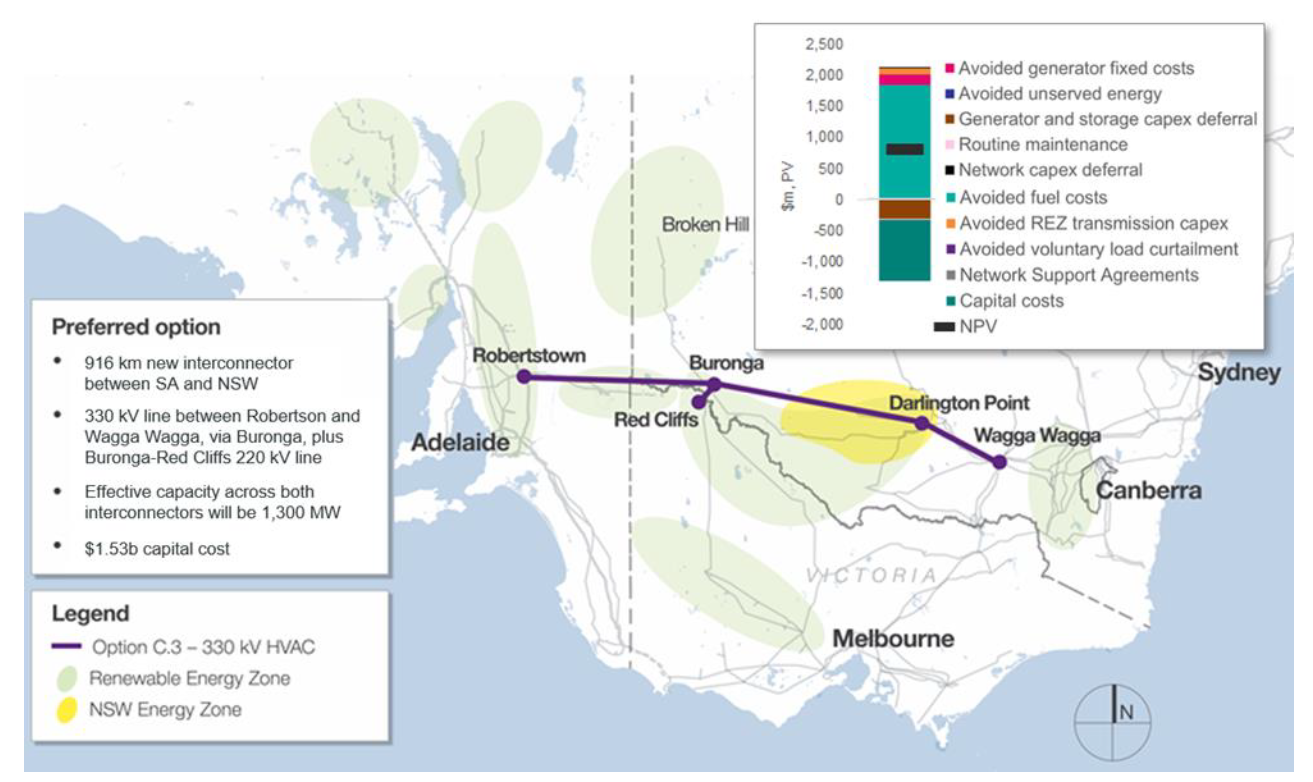 Under the Regulatory Investment Test for Transmission (RIT-T) process set out in National Electricity Rules 5.15 and 5.16, transmission network service providers (TNSPs) must perform a cost-benefit analysis before undertaking major network investments.  This cost-benefit analysis must consider reasonable alternatives, including non-network options, in their assessment of the best option to maximise the present value of the net economic benefit to all those who produce, consume and transport electricity.[iv]  The TNSP’s assessment must follow the guidelines published by the Australian Energy Regulator (AER).[v]

These options are shown below, and range in price between $1.2 billion and $2 billion.

Benefits from each possible option were considered using “High”, “Central” and “Low” scenarios.[vi]

The market benefits of the various options were assessed using the following categories:

The present value of these benefits is shown in the following graph: 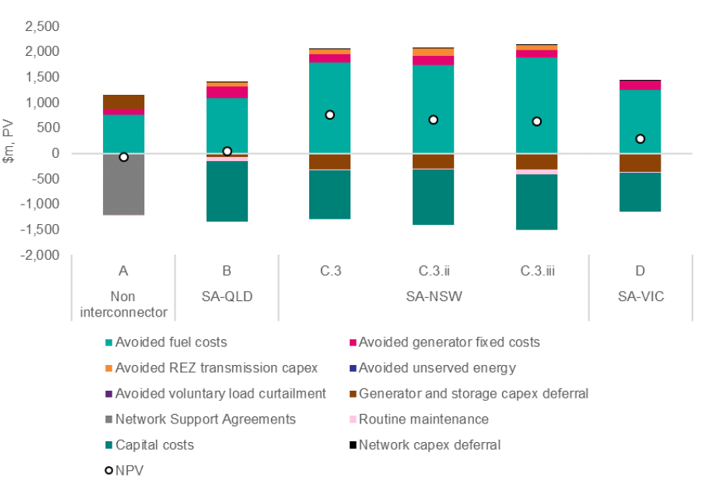 Using the estimated capital costs, the different options were assessed by determining their net present values (NPV) under the different scenarios (High, Central, Low and Weighted). In each case Option C.3 (330kV interconnection between SA and NSW, along with the Buronga-Red Cliffs spur line) reported the highest NPV.

ElectraNet has worked very hard to address submissions it received in response to the Project Assessment Draft Report, which Energy Insider covered in July 2018 - RiverLink: Don’t spend the savings all at once! The analysis is significantly more robust, and some assumptions such as a more stringent inertia requirement of 1Hz/s have been tempered.  In addition, ElectraNet has included an increased number of sensitivities to demonstrate that stakeholders’ concerns would not jeopardise the viability of the proposed solution.  Nevertheless, as with all such business cases, there are many uncertainties that risk, in hindsight, proving the forecasting wrong.

NSW currently has about 2,100MW of large-scale solar and wind plus 3,000MW of hydro. In the development pipeline is 1,520MW of committed renewable generation and 14,337MW[x] of proposed renewable generation[xi] (in addition to any distributed generation that is installed).  NSW’s all-time peak demand is 14,764MW on 1 February 2011.

Much of the net market benefits, as shown in Figure 2 above, are attributable to gas cost savings, primarily in SA, but also in NSW as a result of the new interconnector.  With the impending influx of such large quantities of renewable capacity in each region, presumably the gas-fired generation being displaced occurs in times of lulls in the wind and sun.

The Project Assessment Conclusions Report (PACR) has included the 220kV 24km spur line from Buronga to Red Cliffs based on AEMO’s assessment that it will provide incremental net market benefit.  The analysis presented suggest that the benefits would be in the order of $184 million for an expenditure of $46 million.[xii]  However the analysis assumes 500MW will connect in western Victoria, where connections to this generation capacity are already subject to their own Western Victoria RIT-T.[xiii]

One of the great challenges for the regulator in overseeing the RIT-T is to ensure that separable projects are subject to individual cost-benefits, so a bad project cannot be carried along by a good one.  There is a question of whether this spur transmission line should be subject to its own RIT-T process rather than being part of the SA-NSW Interconnector.

As we previously reported, despite headline numbers showing significant overall market benefits, the case for customers is not as compelling.  The revised findings from ACIL Allen show that customers in SA will be better off overall by $66 p.a. over the period to 2030, while NSW customers’ lot will be improved by $30 p.a.  Customer benefits, however, are not the basis of the RIT-T.  This is discussed in another Energy Insider article in July 2018 – Building Transmission in a Market.

The Project Assessment Draft Report listed one of the identified needs as “enhancing security of electricity supply, including management of inertia, frequency response and system strength in South Australia”.[xiv]  With the introduction of measures such as synchronous condensers to improve SA’s system strength, this identified need has withered, with the PACR stating, “the options considered in this RIT-T are no longer a primary source of system security benefits for South Australia”.[xv]

Finally, the PACR stresses the need for the project’s immediacy, reporting that AEMO’s ISP identified the project as a Group 2 project “that should proceed as soon as possible”.[xvi]  By our reading this is not entirely consistent with the ISP, which describes Group 2 projects as “action [needing] be taken now, to initiate work on projects for implementation by the mid-2020s”.[xvii]

Previously we expressed reservations about the transparency of the justification for this interconnector, but the Australian Energy Council is pleased to note that this has much improved in this second stage.  This is perhaps an endorsement for the existing RIT-T staged approach of consultations.  Whilst sometimes frustrating for network companies, it provides greater confidence for stakeholders that appropriate due diligence is undertaken before such a major, irreversible decision is made which will both burden customers with costs and affect commercial investments.  This is particularly the case when building a 40-year $1.5 billion asset for a power system which is in the midst of fundamental transition.