REZs: Can they overcome the prisoner’s dilemma?

The decision was prompted by the strong response from potential renewable project developers in the state’s first declared REZ – in the Central-West and Orana region (CWA REZ). There were 113 expressions of interest totalling 27GW of capacity looking to connect to the 3GW zone.

The State Government had flagged the creation of three REZs in the electricity strategy it released in November 2019 and, prior to that, in the NSW Transmission Infrastructure Strategy. Apart from the current two areas, a third is earmarked for the South-West with all the locations seen as having “exceptional energy resources, including wind, solar, bioenergy and hydro” and being relatively close to existing grid infrastructure”[i].

The NSW Government has committed $78.9 million to plan and support development of the 8GW New England REZ (see diagram below) with a timetable for its development yet to be established. The latest investment is on top of the $40 million already committed to delivering the CWO REZ, where construction is slated to start in 2022.

The concept of a REZ can be quite beneficial if it solves a “prisoner’s dilemma” as discussed below. However there are two key questions when a REZ is promoted in this way:

We discuss these matters below. 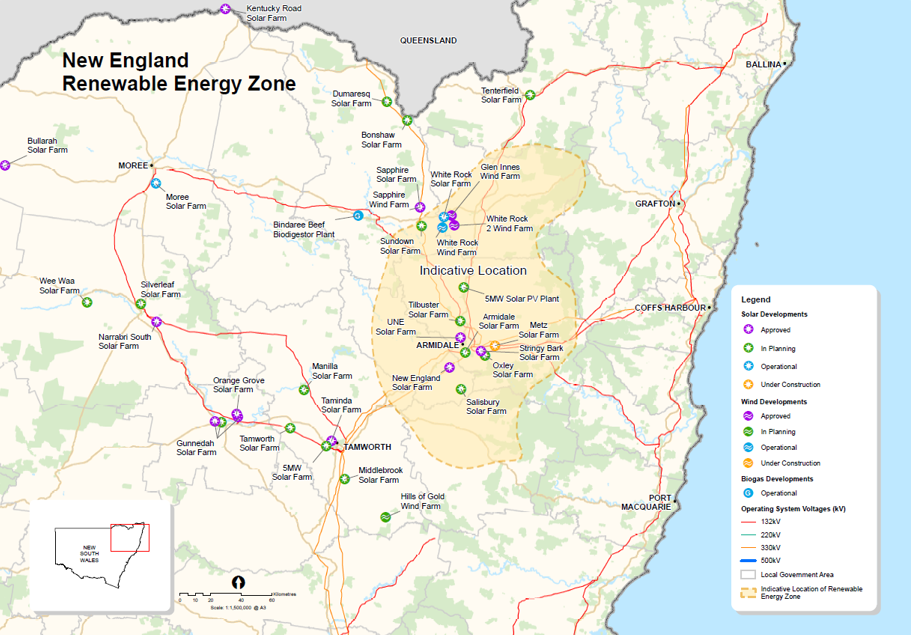 The NSW approach is seeking to tackle a current dilemma that exists in the National Electricity Market (NEM). Developers of renewables seek to build capacity where the wind or solar resource is greatest, and this can also be where the grid is thin or non-existent.

The big influx of renewables over the past two years has seen some solar and wind generators flock to areas that were previously small rural load centres extremely remote from significant load centres. Broken Hill, for example, is connected to Buronga by a single, thin, 300km line which in turn is connected by about 1000km of somewhat thicker lines to the NSW regional reference node in Sydney.

Constraints and other technical issues can arise as witnessed in Victoria’s West Murray zone[ii]. This area has attracted significant investment in grid-scale solar and wind generation, despite being a “remote and electrically weak” part of the NEM[iii]. Consequently from September 2019 to March 2020 issues with system strength saw five solar farms[iv] have their output curtailed.

Issues with generators’ use of the networks are not new but have become more noticeable with the introduction of more diverse, asynchronous, generation across more locations. lIn the NEM’s open access regime there are no firm access rights for generators, so there is no guarantee they can export all their output to the system at a given time.

Even after achieving successful connection, there can be bad surprises down the track. The connection of neighbouring competitors can reduce incumbents’ access and loss, so new generation developers need to carefully consider these risks when selecting a location in the NEM’s open-access network regime.

Of course, it is possible for these access problems in the shared network to be built out in time. However, as shared network is funded by customers, the planners rightly have to demonstrate to the regulator that expensive investment in the shared grid makes good economic sense. There is no guarantee that generators’ access problems will be resolved, and it is widely accepted that it is not efficient to build out all congestion.

These risks should encourage renewable generators to locate in stronger parts of the grid even though the resource may be inferior. This is not necessarily a bad thing. However, due to scale efficiencies, there is also a theoretical potential for large network investments to sometimes be economically sensible if it provides good access for a very large amount of generation. For example, in 2005 Texas developed the Competitive Renewable Energy Zone (CREZ) project, which was designed to build out the Electric Reliability Council of Texas (ERCOT) grid in West Texas and the Texas Panhandle and helped facilitate the state’s long-term target of delivering 10GW of renewable energy. The CREZ, is considered to have helped Texas solve the core “chicken and egg problem” of renewable-energy transmission[v] Such developments may be so attractive to new renewable generators that they will be prepared to contribute a share of the total costs in return for guaranteed access to at least that part of the network, thus relieving customers. This is the theory behind the concept of the REZ.

If the REZ involves a network “extension” - i.e. an entirely new line branching out from the shared network - this arrangement has always been allowed. Generators can organise their own collectives to plan and fund their own REZ. So, if the scale efficiency is good, it should be happening already.

But it isn’t. This may be either that the scale efficiency is not really there, or it could be just that competitors aren’t able to organise themselves to do something that is beneficial for them as a whole. This is known as a prisoner’s dilemma. This is what the NSW Government believes is occurring, and it is hoping to break them out via its REZs.

The Finkel Review identified that there were insufficient signals to direct decisions on where to locate renewables for the overall grid needs. That review suggested addressing the challenge of coordinating transmission network planning and renewable generation investment through REZs.

The ISP seeks to rank these for the optimal timing, based on the overall plan. It includes a REZ scorecard and analyses developer interest, resource quality (wind and solar average capacity factors), network capabilities and characteristics, marginal loss factor sensitivities, land cover and suitability, demand matching and population density.

Any potential REZ locations identified within the overall plan as needing action in the next two years would become “Actionable ISP Projects” and be progressed through the regulatory approval process.[vi] AEMO’s draft ISP however did not recommend the New England REZ for development until 2036.

NSW is seeking to better coordinate and encourage new grid infrastructure, generation storage and system strength services in its identified zones. It is establishing an Energy Corporation to coordinate and work with government, energy market bodies and industry.

The potential appetite for generation development in New England will emerge once NSW issues an expression of interest. However a REZ expression of interest is not much more meaningful than putting one’s name on a distribution list for more information. The real test will come when proponents are required to formally commit, and more importantly, financially commit.

At this point, it will be seen whether those financial commitments are enough to pay for the very major physical investment, rather than place any additional costs on customers or taxpayers, beyond the already committed $78.9 million.

If, ultimately, the REZ is paid for by the generators in return for good access, then it will be a very successful outcome, and possibly worth the $78.9 million of taxpayer’s funds to break out of the prisoner’s dilemma. We are yet to see this however, and whether there will be the political will to walk away from an announced REZ if the full financial commitment is not forthcoming.

Is this the best place for the REZ?

While this is a relatively attractive location for NSW renewable energy projects, any commitments do need to consider the overall impact on the ISP, which, in the short-term, prefers renewable energy investment being directed either closer to the existing grid or to superior locations in other states.  In fact, as mentioned, the Draft 2020 Integrated System Plan recommended the New England REZ be developed in 2036,[vii] rather than now.

AEMO’s 2020 ISP June Progress Update does note that at times, governments or other private parties may want to accelerate development of the network components of a REZ that are not currently actionable under the ISP. This seems a problematic position for AEMO to take as it is effectively inviting governments to interfere with its own planning, thereby undermining better REZs being planned earlier in other states. It potentially invites states to inefficiently compete in a subsidy arms race, as they do when they compete to host sporting events.

In its electricity strategy, the NSW Government was clear that its preference was for national solutions and that its actions should be consistent with its commitment to the NEM, but it also comments that “where the timeframes for reforms required to address power system reliability issues don’t align with the state’s ability to meet its energy policy objectives or issues arise unique to NSW, the government may act unilaterally”[viii].

The Australian Energy Council’s view supports the national planning process overseen by AEMO and the Australian Energy Regulator given this process includes a rigorous, national and independent cost-benefit analysis critical to understanding the economic issues as a whole.

[ii] The area of the Victorian and New South Wales power system bounded by Ballarat, Dederang, and Darlington Point.