Renewables and employment: Not all jobs and growth

The structural adjustment toward a lower carbon economy will include uncomfortable realities about job losses and gains. It is essential that governments are honest about these adjustments so that adequate planning takes place to support communities through the transition.

In Parliament on Tuesday, 21 March 2017 the Victorian Minister for Energy, Environment and Climate Change announced that the Victorian renewable energy target scheme will create 11,000 new jobs for Victorians[i].

Four days prior to the Minister’s comments however, the Australian Bureau of Statistics (ABS) released numbers which demonstrate that most of those jobs will be short term, during construction or underpinned by government and support functions[ii]. It is unlikely that this short term employment in new generation will offset the employment lost in traditional forms of generation being displaced. As the construction of new plant winds down there is likely to be a net reduction in direct employment in the energy industry.

The ABS reported that in 2015-16 annual direct full-time equivalent (FTE) employment in renewable energy activities in Australia was at 11,150. This is a decrease of 2,150 employees or 16 per cent from the previous year 2014-15 and a decline of 42 per cent (or 8,070 FTE) from a peak of 19,220 in 2011‑12. The ABS reports that employment in large scale solar and wind power is primarily driven by installation activity, rather than by ongoing operation and maintenance. Figure 1 shows the declining trend in renewable employment across all states. 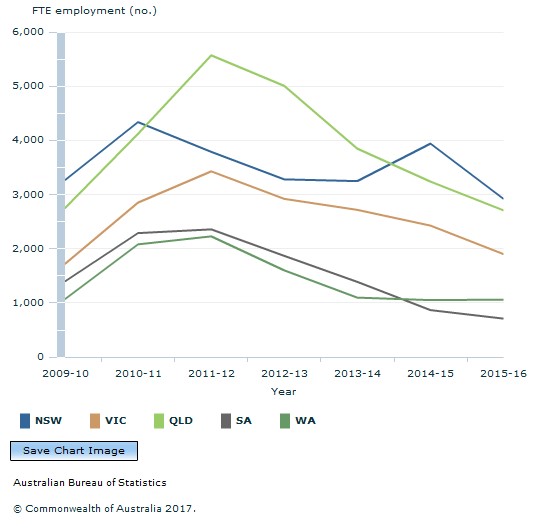 The employment profiles of existing wind and solar plants show us that new forms of energy have a relatively smaller need for ongoing employment than traditional forms of generation, including hydro, gas or coal plants. AGL’s Macarthur Wind Farm employed up to 400 direct jobs at peak during construction, 875 jobs in the region, 2490 in Victoria, 2782 in Australia, and once construction was complete approximately 20 people were employed for ongoing work[iii]. The structural adjustment in employment in the energy industry as the sector decarbonises means moving to a less labour intensive generation mix.

The ABS data now demonstrates this structural change in action. The ABS attributes the rise in renewable energy employment between 2009-10 and 2011-12 to the employment of construction workers to build renewable energy facilities. However, once construction is completed and only ongoing maintenance is required, employment falls quite significantly, even though generation of renewable electricity remains higher.

Figure 2 shows that the majority of employment in renewables are in household level solar systems, but this sector of renewable employment is experiencing the greatest decline (see figure 3). It is hard to say when the market and employment in household solar will become mature. By comparing household data from the Census with solar data from the Clean Energy Regulator, the ABS estimate that 21 per cent of suitable dwellings already have solar, implying there is more expansion in the industry to come as the cost of solar declines. 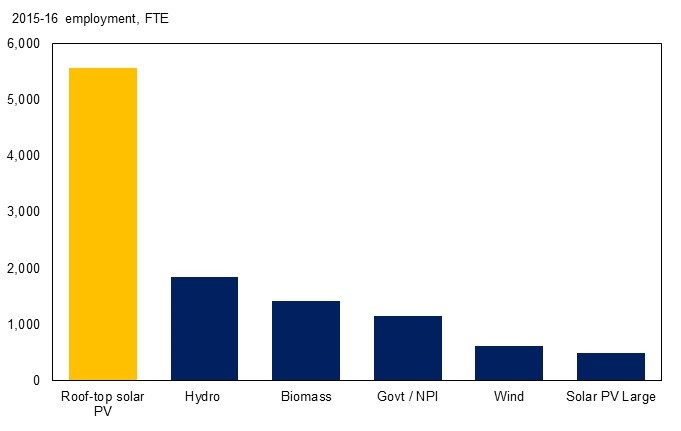 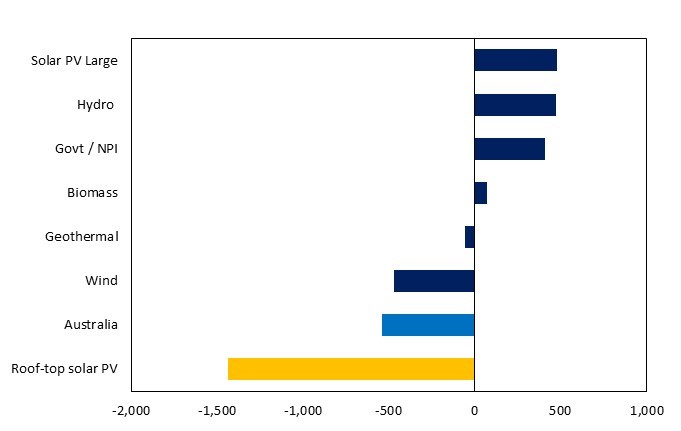 It is unhelpful for politics to misrepresent the true cost of the challenge to decarbonise the energy sector and our economy, including the impact on employment. The reality is that new generation technologies such as solar, wind and battery storage require very little ongoing employment. These technologies help us to achieve lower emissions, but they are unlikely to result in a net increase in employment.

Figure 4: Employment in government and administrative functions holding up well, relative to employment in solar and wind 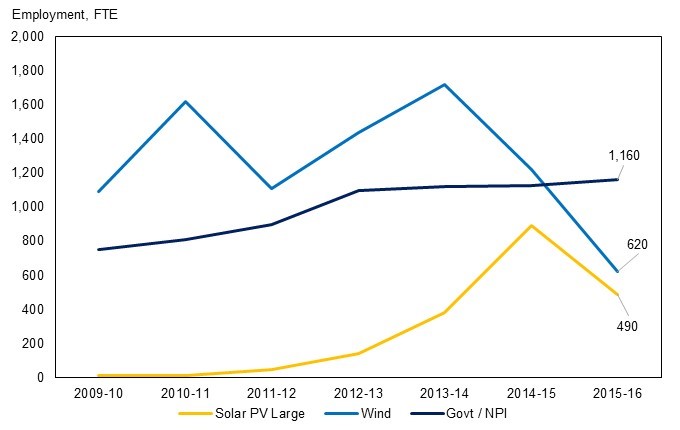 This creep in government and administrative sector employment is a cost to tax payers and the economy. While it costs taxpayers to administer a given set of government rules (such as the Renewable Energy Target, reliability target or green schemes), it costs businesses and consumers to comply with those rules. The cost of complying with public sector regulation as a whole is estimated at around 4.2 per cent of national income – or around $67 billion per year[v]. Such costs also displace other expenditure by governments, households and businesses that would have underpinned employment. So these administrative employment figures do not represent incremental employment in the economy - which will be lower or possibly negative. The rules we have put in place to decarbonise the energy sector have big benefits as well, and we need to make sure we are getting good value from the regulations we put in place – both those set by governments and those self‑imposed by organisations to decarbonise the sector.

[v] Deloitte, 2015, Get out of your own way: Unleashing productivity, https://www2.deloitte.com/content/dam/Deloitte/au/Documents/Building%20Lucky%20Country/deloitte-au-btlc-get-out-your-own-way-230217.pdf