Renewable energy: How does it score?

Both the Clean Energy Council (CEC) and the Climate Council have released reports in recent days highlighting the continued development of renewable generation in Australia.

The CEC’s Clean Energy Australia Report 2015 shows that renewables accounted for 14.6 per cent of Australia’s electricity in 2015 (just over 35,000GWh, of which 15,200GWh of large-scale renewable energy generation counts towards the RET of 33,000GWh). The major contributors were hydro (accounting for 40.1 per cent of renewable energy generated), wind (33.7 per cent) and household and commercial PV (16.2 per cent). Large-scale solar PV contributed 0.6 per cent of renewable generation, or 0.09 per cent of Australia’s electricity. The contribution of each renewable technology is shown in Figure 1.

Figure 1 Estimated contribution of each technology to renewable generation[i] 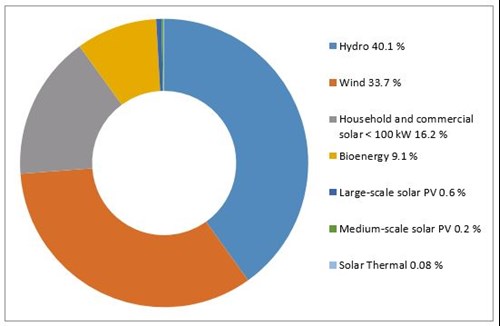 The CEC notes that the overall renewable energy generation was higher in than 2014, with wind and solar increasing by just over 20 per cent in 2015, enough to more than compensate for a drop in hydro generation.

It also notes that eight large-scale solar projects became operational in 2015 “marking a breakthrough year for this extremely promising technology”. The top five large-scale solar plants were AGL’s Nyngan (102MW) and Broken Hill (53MW) plants (both in New South Wales), Royalla (20MW) in the ACT, Greenough River (10MW) in WA and Liddell III (9.3MW) in NSW. Penetration of renewables by state is shown in Figure 2. 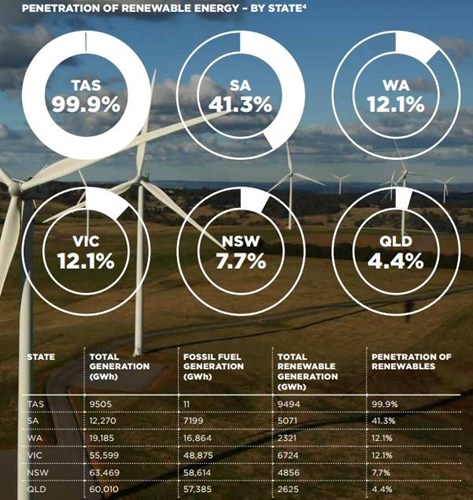 Source: Clean Energy Australia Report 2015.   4: Total generation figures include data from National Electricity Market, the West Australian wholesale electricity market and solar PV. The ACT is part of the NSW region and there is no data for the small NT grid. Some of the Snowy Hydro scheme in NSW is counted as Victorian generation by AEMO. These figures are not the same as the total electricity generation, as non-scheduled and off-grid generation are not included in this data (other than domestic solar). Source: NEM Watch, SunWiz.

Looking forward, to meet the Renewable Energy Target (RET) the report says that between 30 and 50 large-scale wind and solar projects need to be built by 2020, and that the 33,000GWh goal could either be met by around 6,000MW of wind or 12,000MW of solar power, with a mix of these expected (along with other renewable technologies, such as hydro, bioenergy and wave/tidal power). Already more than 8,000MW of wind and 2,500MW of solar projects are under construction or have planning approval, it notes, with this pipeline of projects expected to be enough to meet the RET[iii].

The Climate Council's contribution to considering the approach of states and territories to renewables development has been to produce a scorecard to try to compare state-by-state performance. The scorecard uses a subjective formula – scoring the percentage of renewables, a per capita large scale renewables (wind farms, hydro and solar), the proportion of solar households, as well as ranking government policy settings and state-based renewable energy targets – to establish performance and a final grading. The approach leads to some anomalies. For example, Tasmania sources by far the most renewables of any state (95 per cent according to the council’s report and 99.9 per cent according to the CEC’s 2015 report), and has the second highest capacity per capita of large-scale renewable energy capacity installed (excluding hydro)[iv], but it is only ranked as B grade. The large discrepancy in renewable energy generation in Tasmania reported by the CEC and the Climate Council is unexplained. However, analysis from the Australian Energy Council suggests that 99.9 per cent is the correct figure. 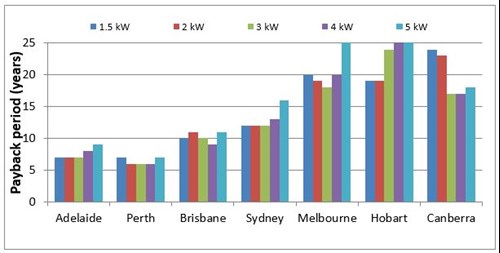 While the scorecard notes that there is a lack of comparable data on the percentage of renewable energy in the electricity supply for the territories and does not give them a grade (A, B, C), the report does include the ACT in its “leading the pack” grouping elsewhere in the report, along with South Australia and Tasmania. While the Northern Territory, is reported as “lagging behind”. The ACT is a part of the NSW grid and is meeting its 100 per cent renewable energy through funding of renewable projects elsewhere in the NEM, which makes it extremely problematic to compare with other jurisdictions such as those listed below. The Climate Council’s scorecard is shown below[v] in Table 1.

The inclusion of renewable energy targets is not necessarily meaningful either, regardless of whether they represent good policy. Queensland and Victoria are currently going through the process of determining what their proposed targets mean in practice, while although South Australia’s is well established, it has effectively relied on the Commonwealth’s renewable energy subsidies to drive investment in SA.

Neither report considers the increasing challenge of integrating more intermittent generation into the electricity grid. The Climate Council simply comments that as Australia faces up to delivering deep cuts to emissions through increased renewables, “it is no surprise that increased grid inter-connectivity and storage will be needed”.  It also notes that South Australia’s ability to add more renewable capacity and export surplus power interstate, as well as import power when the wind isn’t blowing and the sun isn’t shining, is being adversely affected by the limited size of the interconnector with Victoria. The council argues that there are “compelling” reasons to urgently investigate a new interconnector between SA and NSW. A new interconnector, it writes, would increase competition in wholesale markets in three states (SA, NSW, Vic), improve supply security and reduce the carbon intensity of the National Electricity Market. This analysis overlooks several factors, including that there are already two routes open to proponents of new interconnectors (a market asset route, where the owner takes the risk on how much revenue they can earn from facilitating interregional trade, and a regulated asset route, where the proponent simply has to demonstrate a net benefit and they can then earn a guaranteed income). It also overstates the value of “increasing” competition in an already highly competitive market.

Lastly, in assessing jobs in the renewable industry, the CEC reports that there has been a 27 per cent fall in employment from the peak of 2011-12 (19,120) to 2014-15 (14,020). The CEC comments that the mood across the renewable industry is upbeat in 2016, and it expects that job numbers will begin to grow as projects are developed under the RET in coming years. The Climate Council points to accelerated renewable energy deployment creating jobs across a broad range of activaties including planning, construction, manufacturing, operations and maintenance.  It argues that a doubling of renewable correlates with even more jobs being created even taking jobs losses in fossil fuels into account.

Renewable energy deployment programs often create jobs that are largely during the construction phase and hence do not extend into ongoing positions. Australian Bureau of Statistics (ABS) figures show that the large bulk of the jobs in the sector are in rooftop PV installation[vi] (which includes solar hot water systems) with total direct annual FTEs in 2014-15 of 7,480 or 53 per cent of all employment. The ABS notes that while employment in this category fluctuated from 2009-10 to 2014-15, it remained the largest single contributor to employment in renewable energy activities throughout the period. It peaked in 2011-12 when employment in roof-top solar PV made up 75 per cent of total direct FTE renewable jobs.

Employment in wind power is primarily driven by installation activity, rather than by ongoing operation and maintenance and as the ABS[vii] notes: “As a result, this employment is heavily dependent on continuing formation of wind power infrastructure and is relatively volatile.”

[iv] Game On. The Australian Renewable Energy Race Heats Up, Climate Council May 2016