Powering up the potential for storage

Energy storage is not new. Pumped storage, for example, has been used for decades. What is new is developments with technologies like lithium-ion batteries, which are forecast to continue to fall in cost and, as a result, are expected to make energy storage increasingly accessible and viable for broader uses.

Two recent reports consider this potential, as well as possible barriers both in Australia and the UK. The reports come at a time when German utility E.ON, has indicated it is targeting potential revenues of 12 billion euros by 2020 from developing energy storage applications. The vast bulk of this is expected to come from providing grid batteries for utilities in the US and power back-up support for the industrial and commercial sector[i].

Released in December the Australian Energy Market Commission’s (AEMC) final report “Integration of Energy Storage – Regulatory Implications” argues that it has the potential to greatly expand consumer choice, while networks and generators are also likely to derive value from storage solutions with storage offering an alternative to network augmentation and potentially helping to smooth the intermittent nature of renewable generation.

Last week UK-based consultancy Eunomia released, “Investing in UK Electricity Storage”, which points to barriers it says should be addressed to support long-term investment and wider deployment of storage in the UK.

Eunomia projects that as technology and installation costs fall there will be exponential year-on-year growth to over 1.6GW in 2020 in the UK. Behind-the-meter applications are expected to be the major component, but distribution network operator services and co-location of storage with renewables are flagged as other likely drivers (see figure 1).

As greater reliance is placed on dispersed, intermittent sources of electricity that can’t simply be switched on when needed, changes in consumption patterns, higher power bills and more pressure is placed on distribution networks “there is a growing, critical need for more flexibility within our electricity network”.

Eunomia notes that intermittency is not the only challenge posed by renewables - the increasing deployment of distributed generation is causing new challenges with ever-larger areas of the distribution network reaching maximum capacity.

“Increased deployment of distributed generation on the grid not only limits the capacity for new generation but also increases the risk of voltage fluctuations, overheating and network faults.”

Demand patterns are also changing and still higher peaks can be expected if the transition to a lower carbon energy system translates into greater electrification of heat and transport.

Electricity storage can provide greater flexibility to the grid network, absorbing or releasing energy to smooth intermittent generation patterns and demand variability. “It can also help to manage the implications of potentially more variable patterns of consumption, such as frequency imbalance, and offer an alternative to conventional network reinforcement to the grid. Price differences between peak and off-peak and the wider offer and take up of time of use tariffs will make opportunities for storage as a method of reducing electricity bills increasingly attractive".

The key question for any investor will be the payback period for the capital costs and the report points to several revenue and cost saving streams available. These are set out in figure 1. 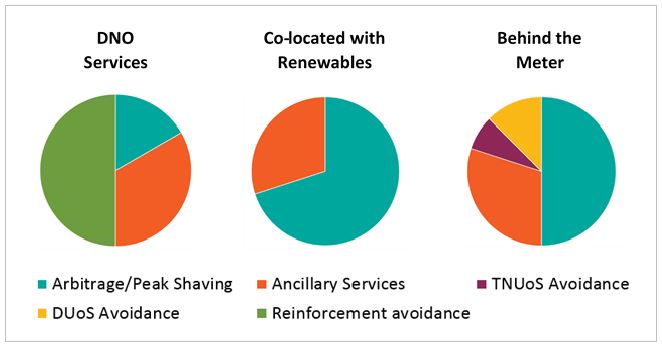 1. Revenues from Transmission Network Use of System (TNUoS) and Distribution Use of System (DUoS) avoidance are project-specific and will vary depending on energy consumption and location.

2. DNOs are only currently able to access very limited revenues from arbitrage or ancillary services, but this is likely to change in the near future

“Many commentators seem to regard electricity storage as the panacea to the post-subsidy environment for renewables. Integrating electricity storage with solar PV or wind appears to offer the opportunity both to raise revenues and potentially overcome grid constraints. Yet the economics associated with integrating storage technologies with renewables remains challenging,” the report says.

It points to efficiency of storage batteries leading to less electricity being exported than was generated, which will require a higher peak price to offset the “lost” value of power and the cost of the installation and to provide a sufficient margin.

“In today’s UK electricity market the basic price differential between peak and off-peak power sold by a wind or solar farm alone is unlikely to provide a sufficient driver.

Overall, it finds co-location of electricity storage with renewable generation may not live up to the “hype” and is more likely to be attractive when also being driven by a site-specific requirement.

The rapid deployment of renewable electricity onto the distribution networks over the last decade is now running into significant physical constraints and present major challenges for Distributed Network Organisations (DNOs). Demonstrations had shown that batteries integrated into a network could overcome some of these issues, but widespread deployment is hindered by licencing with storage currently defined as a “generation” asset in the UK, which prevents them from owning and operating storage assets larger than 10MW.

While integration of smaller storage is available restriction also limit the investment DNOs can make in, or income they can receive from, non-distribution activities to 2.5 per cent of business revenue.

The barriers mean conventional network reinforcement works generally represent a more practicable approach to network management. Without rule changes, storage within networks is only likely to be feasible if contracted to third parties, the report notes.

Storage offers the potential for business to reduce power costs through reduced peak power consumption and avoiding transmission and network charges is making battery storage attractive for intensive electricity users, such as manufacturing sites, distribution centres and data centres. They can also generate revenues through ancillary services to the National Grid.

The report says that behind-the-meter applications are the most attractive area for investment in electricity storage, but argues that until wider deployment of electricity storage takes place in the UK, developers are unlikely to be able to secure debt to finance such installations. Innovative business models, it remarks, are needed.

For behind-the-meter applications such models might involve the developer or technology provider retaining ownership and maintaining the battery while sharing revenues from electricity and ancillary services with the host organisation, which shares the benefits of lower electricity costs.

To enable long-term investment and wider deployment, section 6.0 of the report, "What will Unlock UK Investment" proposes a number of measures.

One of the main recommendations is to clearly delineate between regulated and non-regulated parts of the energy market “to support confidence in the competitive market for storage services”.

The AEMC says there are a number of ways network businesses can access the services enabled by storage capability and concludes that networks, “should only be able to own storage ‘behind the meter’ through an effectively ring-fenced affiliate that separates this service from the provision of regulated network services”.